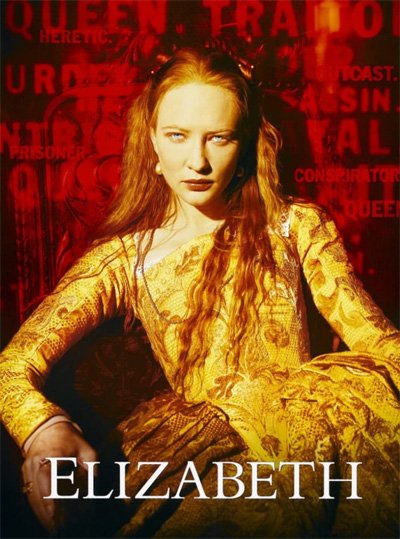 Elizabeth is a great historical movie from 1998, set in mid-1500s England, still far from the Golden Age.

After the queen has just died without an heir, the government crowns her half-sister as the new queen, to everyone’s disbelief.

The young girl is not ready for such a task, ruling a corrupt kingdom close to bankruptcy and civil war.

Internal divisions gnaw at England at the time, a country also fighting a religious struggle against the Papal States.

In addition, France and Spain patiently await the queen’s collapse from behind the scenes.

Numerous traitors are indeed hiding at court, waiting for the right moment to seize power.

Her advisors, moreover, seem incapable of seeing the plots of conspiracies forming around her.

All they can do is advise Elizabeth to get married, thus ending up subjugating England to their enemies.

But the cunning and elusive Francis Walsingham moves in the shadows, trying to defend his country from foreign plots.

Initially, he is outside the Queen’s circle of trust, but he soon becomes her most loyal and tireless aide.

Ruthless and suspicious of everyone, he prevents attacks and deception by those who wish to dethrone his queen.

Meanwhile, she painfully matures from a young girl to a woman respected and feared by all.

In time, the queen will bring England to the height of its glory, a period they will call Golden Age.

The great epic of the virgin queen

While keeping in mind the inevitable historical inaccuracies about Queen Elizabeth, this 1998 movie is still magnificent.

The plots and shenanigans that occur around the throne are enthralling, creating an impressive ecosystem of characters.

On the one hand, we have a magnificent historical reconstruction, maniacally cared for in every detail.

Every brick of the locations fits perfectly with the superb furnishings in the strict style of the time.

What about the costumes, almost surreal in the brightness of the colors and the details of each seam.

This tremendous general elegance fights with the other soul of the story, which describes a dark, violent and ruthless world.

Each character tries to gain or maintain power, smiling at their enemy before stabbing him in the back.

This is how this little girl, first innocent and sunny as a flower, hardens into a sacred mask of virginity and purity.

The last scene best describes what I’m talking about, combining it into a terrible and beautiful final sequence.

After defeating her enemies, the queen walks among her subjects, like a saint coming down from Heaven.

She no longer has any personal passions or desires but is only resolute in bringing her beloved England to glory.

Those who have mocked or belittled her must bow their heads, surrendering to the undeniable power that this extraordinary woman has conquered.

The ascent of a gorgeous and brilliant actress

Cate Blanchett plays a sublimely beautiful queen, a role that will definitely launch her career.

Her angelic face with those wonderful pale eyes (albeit historically incorrect) carve into our imagination the life of one of history’s mightiest women.

Power locked up in her youth as a prisoner and then rose to absolute power for almost 50 years.

It would be easy to envy the wealth and luxury in which she lives, yet we feel compassion for her isolation and constant fighting against the whole world.

Around her revolves a universe of characters searching for power: military figures, nobles, and clerics united by the desire to see her fall.

Her only friend is the character of Geoffrey Rush, in the role of Sir Francis Walsingham.

Initially foiling the various threats surrounding the girl without her even knowing it, he will become her most faithful ally.

It will be him to protect her from French and Spanish plots, coming to discover a coup organized by the Roman Church.

This commitment will soon turn him into Secretary of State, defeating every rival and helping the queen in every choice until his last day.

Finally, we must praise the immense work of Shekhar Kapur, who reaches here the peak of his career.

Despite the many events and characters, the director maintains a narrative line that is charming and easy to follow.

From 1998 to date, Elizabeth remains one of the best historical movies ever, unbeatable for elegance and entertainment.

I repeat, many things may be historically inaccurate or disputable, yet the cinematic power of this movie is not in question.

American Woman – The Truth Of...