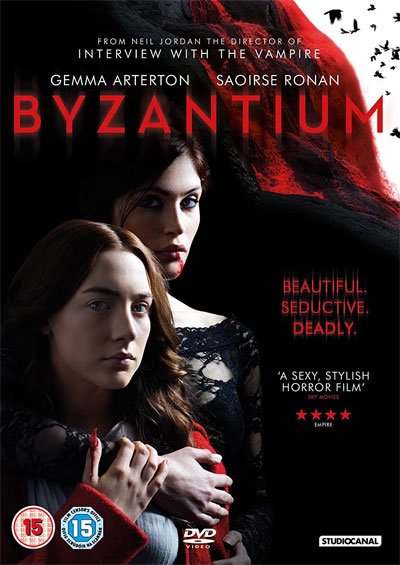 Byzantium is the name of a hotel in a small town in England, where a mother and her daughter live in this 2012 movie by Neil Jordan.

Although appearing just to be a common dancer/prostitute and an innocent little girl, they actually are two hundred years vampires.

In order to survive, the mother kills and drinks the blood of occasional customers, perverse men with a violent nature.

Instead, the daughter chooses a different path, feeding on people with incurable diseases to which she finally gives peace.

Indeed she once had a deadly disease, yet her mother turned her into a vampire to save her.

The woman, instead, had become immortal by deceiving a cruel vampire, who tormented her in every way for years.

After being initiated to a painful life of prostitution, he wished to take her daughter as well.

Finding a remote island where his power lies, she uses it to become a vampire along with her daughter.

However, the one she had fooled was not alone, belonging to a group of rich and powerful immortal men.

Since then, these men have chased her everywhere, impeding her from regular life with her daughter.

Unfortunately, someone finds the diary where the little girl wrote her story, leading their enemies to uncover them again.

At that point, the final confrontation is inevitable, but maybe someone they never imagined will take their side and help them.

Can a mother’s love become a trap?

Byzantium is an excellent example of feminist fantasy, a 2012 movie in the wake of the success of Interview with the Vampire.

In this case, indeed, we are dealing with a story with a completely different point of view.

The mother hardens over the years due to terrible experiences, becoming similar to her hunters.

The world of men seems to be entirely against them, pushing them away from every place they try to put down roots.

The all-male vampire coven is worse, where the worst specimens of humans on earth dominate.

These men were already arrogant because of their wealth, eventually becoming contemptuous of the weaker ones once they became vampires.

They are even more despicable towards this mother and her daughter, considering them thieves of their power.

Their punishment is a life of eternal flight without ever having peace, friends, or a peaceful night’s sleep.

But the little girl’s imagination and vitality get the better of everything, even her mother’s overwhelming love.

Although she tries to protect her, she often is cruel by denying her daughter any choice.

In addition to the external conflict, we also have an internal instability in this small family, which will grow to the point of no return.

Although from 2012 to date, countless movies about vampires have been made, Byzantium remains, in my opinion, one of the best.

Originality doesn’t always pay off at the box office

Although Byzantium is interesting in portraying two weak but strong-spirited characters, the movie didn’t have much luck in theaters back in 2012.

Neil Jordan‘s superb direction was not enough to make the audience like the story.

Everyone expected something similar to Interview with the Vampire, not appreciating the sharp difference.

Sometimes, the mother is brutal, so the daughter instead is human and compassionate.

This contrasting relationship is the driving force of the whole film, the fulcrum around which all the other characters revolve.

We see a man as the emblem of the coven of evil vampires, although it is not he who commands the group.

Completely different instead, the delicate Caleb Landry Jones, the young friend of the girl.

For his love, everything will change forever, even if he will unintentionally get her into trouble.

A sick boy in whom the vampire sees her distant childhood again, when she became a vampire without having any choice.

Impossible not to still compare Interview with the Vampire and the fabulous Kirsten Dunst, the vampire woman eternally in a child’s body.

However, that was a secondary character with only a secondary role in the story, while here, she is central.

So I hope you rediscover Byzantium, a little gem abandoned by many in the movies oblivion since 2012.