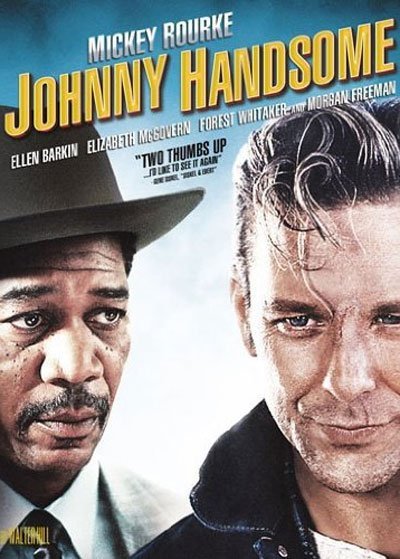 In 1989, the great Walter Hill brought to theaters another of his many masterpieces, Johnny Handsome, starring an outstanding Mickey Rourke.

Johnny is a dreadful-looking guy with only one friend he met during a difficult time in prison.

The man owns a bar with many financial problems, so he asks him for help to raise some money.

Indeed Johnny is not only a skillful criminal, but he also has a brilliant mind to organize a robbery.

Unfortunately, they will not be alone, as they must involve some other shady accomplices in the robbery.

However, the heist succeeds, and the gang manages to steal a lot of precious jewels.

But, at the last moment, the accomplices betray them and kill his friend, while Johnny ends up in prison.

Refusing to confess to the police, the court sentences him to a long period in prison.

Despite his silence, the traitors still fear that he will talk, so they pay two prisoners to stab him.

The wounds he suffers are severe, but he survives and ends up in hospital.

A young and progressive doctor offers him an incredible opportunity during his recovery.

Thanks to a new experimental surgery, he promises to fix his monstrous appearance.

Moreover, he may have a do-over on his life, getting out of prison to finally fit into civilized society.

But once Johnny has a new face and a new identity, he will seek out the traitors to avenge his old friend.

A Criminal whose fate is sealed

Johnny Handsome is a perfect revenge and redemption story with Mickey Rourke in one of the best roles of his entire career.

The actor plays Johnny with absolute catharsis, transforming from a fearsome criminal into a charming and mysterious urban hero.

His transformation is filled with pain and skepticism until it reaches pure wonder when he sees his new face in the mirror.

Initially, he seizes the opportunity to start a new job and a romance with a beautiful co-worker.

But soon, guilt and anger over his friend’s death inevitably lead him back to being a criminal.

Morgan Freeman is equally outstanding as the cynical cop who follows his every move.

Unable to believe that Johnny can change, he continually mocks the doctors’ faith, regarding them as naive fools.

Forest Whitaker plays the leader of these doctors, the only one who sees behind the monstrous face of the criminal for the first time.

His commitment goes beyond his job, hoping to give a second chance’ to an unfortunate boy to whom life has never left a choice.

Finally, Ellen Barkin and Lance Henriksen are the pair of thugs who ruin the protagonist’s life.

They are two evil lovers staying together for convenience only but ready for betrayal at the first opportunity.

The atmosphere is always between noir and metropolitan western, with dirty places populated by violent characters with no morals.

Johnny Handsome is an immortal masterpiece of film history, carving into the rock the beautiful and monstrous face of a young Mickey Rourke.

A director who has become a legend

Walter Hill directs another essential piece of his rich filmography.

Indeed, he made some 70s and 80s masterpieces such as The Driver and The Warriors, two absolute generational cult movies.

Or we can also remember the hilarious 48 Hrs, which definitively launched the great comic actor Eddie Murphy.

After the amusing Red Heat with Arnold Schwarzenegger, the director changes to tone by making his darkest and most pessimistic film.

The result was a resounding box office flop, perhaps because of a story too cruel for the audience at the time.

I consider it a film out of its time, confirming all its strength today despite being released in 1989.

Characters are incredibly believable, along with the elegant, traditional direction that is accurate in every detail.

The story has an unstoppable pace, alternating between deep psychological introspection and classic 80’s action.

I can hardly think of another similar movie that can live up to it, even 30 years later.

For all those who have not had the chance to see it again since then, I recommend this great cinematic experience.

Otherwise, I hope you’ll agree with me in considering it a must-see masterpiece for those who already know it.