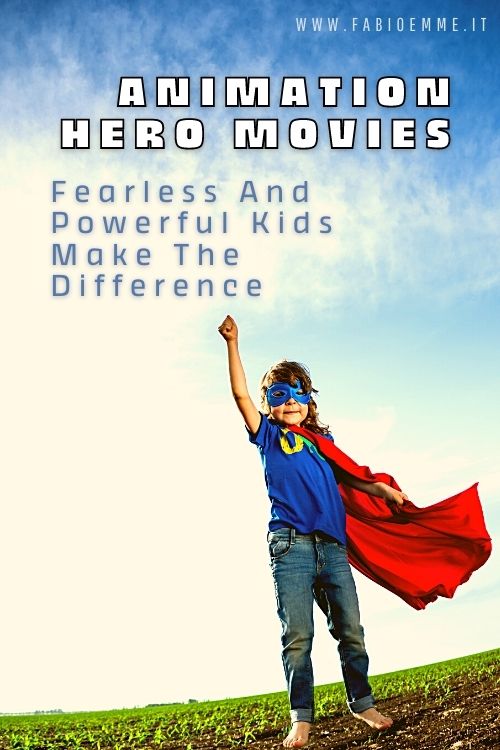 Sometimes critics are a little too hard on Animation Hero Movies fans.

The complaint is always the same: they are all the same stories, too commercial and simplistic to be considered real cinema.

Even masters like Martin Scorsese and Francis Ford Coppola have had their say on the subject.

Like the Avengers universe, they are too serialized, more like a TV series than movies because of their episodic structure.

Too often fail to delve into character psychology, simply dividing them into good guys and bad guys.

I partially agree with this judgment, although I understand why these movies are so appealing to younger audiences.

Let’s be honest, who has never dreamed of having superpowers as a kid?

Who hasn’t wanted to fly like Superman or have the awesome Batman gadgets?

So at least for today, let’s leave specific criticisms alone, with all due respect to the two great directors mentioned above.

Today we talk about animation movies where the heroes are just kids who fearlessly fight for justice.

So hold your breath and wear your tight colorful costume because it’s time to fight against evil.

The young Hiro is an intelligent and full-of-life boy and a brilliant inventor.

However, despite his brother’s insistence, he won’t go to school because he believes he has nothing to learn.

Instead, he prefers to go to the neighborhoods where clandestine meetings between small robots occur, where he quickly makes enemies.

After another stormy night out, his brother drags him to the lab, working on a new project.

The young boy is stunned at the prototypes of his colleagues, a group of friendly and eccentric nerds.

His brother is even more impressive: a new robot that provides immediate medical assistance to people.

He decides to join this strange group of scientists and start building many mind-controlled machines himself.

However, just when he presents the invention at a conference, the building catches fire, and his brother dies.

Left alone with his medical robot, he decides to use his skills to find out who caused that tragedy.

Together with him, the other boys and girls in the lab then join in, turning their inventions into a means to become superheroes.

But for every new superhero, there is, of course, also a villain to face.

In this case, he is an evil masked man who stole the little boy’s telepathic invention and then used it against him.

As his brother’s soft robot gets better by the day, he begins to change as well, fighting between a craving for revenge and a desire for justice.

Director Don Hall proves to be an excellent manager of these projects, and further proving in Raya and the Last Dragon, already recommended on this site.

As always, comedy mixes with drama and the young protagonist’s loss, who must react to his brother’s death.

The animations and colorful sets of the Disney house are of excellent quality, creating an imaginary city halfway between Tokyo and San Francisco.

Through numerous mistakes and attempts, this very close-knit group of nerds turn into superheroes to the delight of all children.

Instead, the cute robot nurse is original, a good giant white and rubbery as a Marshmallow.

His brother’s invention is the young child hero’s legacy, who initially doesn’t know what to do with it.

However, the robot’s purpose is to help people, not by chance faced with the villain who does not obey the boy wanting revenge by hurting him.

It definitely changes the purpose of the many action scenes, funny and with a great rhythm but never unnecessarily violent.

In short, Big Hero 6 is an animated film with a hero quietly safe from the censorship ban for minors.

Despite this, it remains delightful even for adults, who will become children again for an hour and forty.

From a team of hero nerd scientists, we now move on to an animation movie about two kids who are friends for life.

Since childhood, George and Harold have known each other, soon becoming inseparable in their reckless adventures.

These two elementary school kids create a comic book about a superhero they call Captain Underpants with their lively imagination.

Unfortunately, their pranks and constant sneering make the school principal very angry, who tries every excuse to separate them into different classes.

But just when they are in his office, and the sentence is about to drop relentlessly, something incredible happens.

Thanks to a magic ring, the two friends manage to hypnotize him, making him do whatever they want.

At that point, they transform the gruff and composed principal into the hero of their creation, Captain Underpants.

The timing could not be better since a strange new professor arrived at the school.

Due to personal trauma, this bespectacled dwarf is utterly averse to the joyful laughter of children.

Moreover, he is not a simple professor but a mad scientist capable of manipulating the minds of others.

So George and Harold will have to try to stop him before he reduces all the school’s pupils into emotionless zombies.

Together with them will fight their main friend/enemy in the (skimpy) costume of their favorite superhero.

Imagination is the greatest superpower

What’s best about this animation movie are its characters, from the lovable child protagonists to the delirious superhero in his underpants.

The two friends make a great pair of innocent but hyperactive brats, always looking for something to do or create from scratch.

Equally successful is the character of the principal, initially hateful and cruel to the extreme, which then becomes a nutty defender of justice.

The story literally lives on the interactions between these three characters and the brilliant imagination of these two children.

Their dreams and rambling projects explode the joy of living that we can remember from childhood.

Happiness is untouched by the pressing commitments of adult life, full of stress and worries about the present and the future.

We can then look back with nostalgia at these two children as we think back to our past when we were half as tall as everyone else around us.

Back then, a simple ball, a puppet, or a doll kept us busy for hours on end, with no need for anything other than our fantasy.

Adults sometimes struggle to remember the bliss, simply letting our imaginations run wild like a wild horse on the prairie.

In short, another animated film that is perfect for watching with the family, with a hero so atypical that it will make your kids laugh aloud.

Not to mention that maybe even the adults will feel a little more carefree after spending an hour and a half with these little rascals.

After two lesser-known animation movies, we finally switched to one of the most beloved superheroes for kids worldwide.

The protagonist, however, is not the real Spider-Man, but a little boy named Miles Morales.

He recently started going to college, leaving his childhood home, located nearby.

His family’s atmosphere is relatively peaceful, although his father hates his hero Spider-Man.

Moreover, the conflict between his father, a policeman, and his shady business uncle is always present.

However, he loves both of them, but with his uncle, he has more fun making graffiti in the middle of the night.

A strange spider stings his hand during one of these outings, and everything immediately begins to change.

Climbing the walls and spitting webs from his hands, the boy quickly realizes that he has the same powers as Spider-Man.

Also, returning to where the spider bit him, he finds the hero fighting with the heavy evil Kingpin.

Aided by other monsters, Kingpin prevails and eventually kills Spider-Man, who, before dying, asks the boy to attempt to stop him.

Indeed, the villain plans to open an interdimensional passage under New York, which would have catastrophic consequences.

From this passage, however, other versions of Spider-Man from other universes will join the boy in the fight.

An animation movie that’s better than the live-action hero

Honestly, I’ve never been a big fan of Spider-Man since the distant 2002 debut with the great Sam Raimi directing.

Nevertheless, I recognize the profound influence on children as one of the superheroes with whom they can best relate.

Personally, I consider this animation jewel above any movie with actors in the flesh about the friendly neighborhood hero.

The graphic style of this Spider-Verse is very original, differentiating itself from other similar productions.

It has a charm never seen before elsewhere, somewhere between digital computer animation and fun comic book graphics.

Drama and humor also alternate at an incredible pace throughout the story, coexisting together perfectly.

Finally, the many variations of Spider-Man that come from the various universes are simply phenomenal.

We have a girl with her trusty robot, a black and white noir detective, and even a hilarious pig spider.

Finally, to replace the late Peter Parker of our universe comes a failed Peter B, disappointed and overweight.

This combative and colorful interdimensional group will accompany the boy in his training.

Protecting him when he’s weak and confused, they’ll eventually help him become the new Spider-Man of this universe.

Spider-Man: Into the Spider-Verse stands among the best animation movies of all time, featuring a human and believable hero.

Unfortunately, the last movies did not want to follow an example, focusing on the formula of many special effects and little else.

Kill Command – How do murderous...