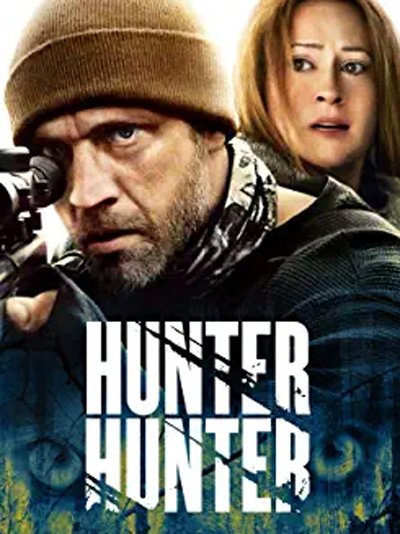 When I saw Hunter Hunter, a 2020 thriller movie, a few days ago, I didn’t expect to be surprised so much.

The story begins with a small family living in the woods completely alone.

Mother, father, and their teenage daughter survive by hunting animals and selling furs in the small town nearby.

But times are getting more challenging, as the price they get for them is lower and lower each time.

Moreover, the cost of living has increased to the point where it’s hard for them even to buy food.

The two parents often argue about going back to the city, but the father is absolutely adamant.

Making their situation even worse, a dangerous wolf wanders into their area.

Although they thought they had killed him a long time ago, he has returned, attacking other animals and complicating their work.

The father then begins to hunt him down again, but he disappears and no longer answers the radio after leaving.

After appealing in vain to the police, the mother and daughter try to resist until he comes back.

However, there is something much more dangerous in the woods than the wolf, which will come knocking on their door.

Hunter Hunter is quite a unique 2020 movie whose first thing working is relationships between these family members.

The father is the anchor of the house, the hunter wanting to live within the woodland isolation at all costs.

While the mother initially accepts his way of life because she loves him, the birth of her daughter changes everything.

Indeed, she then begins to yearn to return to the city, not wanting her girl to grow up not knowing the real world.

It is from here, with this mother’s doubts, that we begin to follow this story.

An internal conflict is quietly separating the family, even before an enemy from the outside arrives.

Her daughter, however, has no such desire to leave the forest, even though she has never set foot in the city.

Knowing no other people outside of her family, though, she’s actually never really made a choice.

She learns how to track animals from him, recognizing their species even if only by smelling their droppings.

In the same way, she gets better and better at handling weapons and building traps, their main working tools.

She even becomes so expert that she teaches her mother how to tan skins, a ritual that will return in the terrifying finale.

Summing up, 2020’s Hunter Hunter is a movie with a very ambiguous approach to the natural environment.

On the one hand, the charm of living in the wild certainly gives absolute freedom.

Yet on the other, we humans are social animals and require relationships with other people to feel genuinely comfortable.

The truth probably lies somewhere between these two points of view, which many of us unfortunately never manage to find.

Few resources but lots of talent

Although with few actors and mostly natural locations, in 2020, Hunter Hunter succeeds where other movies often fail.

The story immediately takes off with just the proper tension of a thriller, then gets into horror towards the end.

Characters are definitely the best part, a family triangle united but also with many unsolvable problems.

Joseph Mersault is the perfect face for a hunter, a man dedicated perhaps even too much to his passion than his family.

Although he understands his wife’s motivations, he has no intention of abandoning that place and the solitary life they lead.

Summer H. Howell instead plays his daughter, a young aspiring hunter who lives entirely in her father’s shadow.

Idolizing him beyond measure, she wants nothing more than to follow in his footsteps, but without ever having known civilian life.

Camille Sullivan is the voice of reason for these two characters, the only one who understands that this life is now impossible for them.

But when danger approaches their home, she too will grab her rifle to fight the threat.

Also, without spoilers, the story closes on her face in one of the scariest endings I’ve ever seen.

Summing up, we can praise with honors Shawn Linden‘s work, incredibly talented at directing and screenwriting.

A director I hope to hear more about in the future and to find productions willing to believe in him.

Meanwhile, for those who missed it in 2020, I strongly suggest catching up with Hunter Hunter, among the best recent movies.