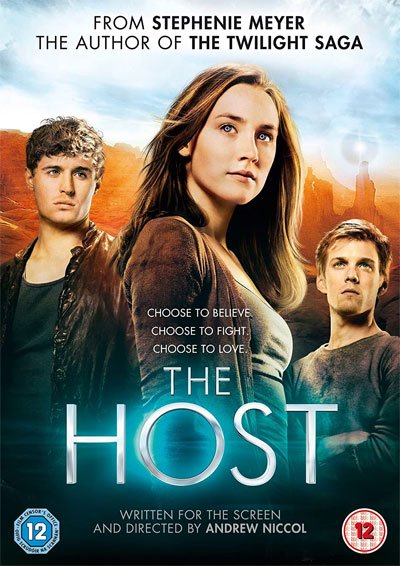 The Host is a 2013 movie about an invasion of Earth by a strange alien race.

We begin to follow the story after years of humans losing the fight and the planet’s control.

However, these aliens don’t seem interested in destroying or raiding our resources.

On the contrary, they use their technology to restore the environment and create a society where everything is available to everyone.

Unfortunately, they do not respect the human race, which they consider too dangerous to be free.

So they implant in each person an alien soul behind the neck, which governs the body by subjugating the host’s mind.

Yet some humans are stronger than others, such as the young protagonist girl refusing to be replaced by the invaders.

A conflict immediately begins between her and the soul embedded in her neck as she gets to know other human resistance members.

They both have to live in the same body, fleeing into the desert when another soul becomes obsessed with their case.

At that point, they reach the safe house where a group of humans is in hiding, including the girl’s ex-boyfriend.

A strange love triangle begins when the soul falls in love with a different guy.

However, the hunter’s soul does not give up and wants to capture the girl at any cost, even kill a fellow human.

While the humans and the alien soul slowly become friends, the enemy will get much closer and dangerous.

A movie for kids dealing with adult topics

The Host is a story that hides its intelligence under the guise of a standard 2013 teen movie.

Undoubtedly many didn’t take it seriously because of a book written by Stephenie Meyer, author of the various Twilight movies.

I have never been a big fan of this famous saga love vampire, finding it very bland and boring.

So I, like others, I think, admit that I started with skepticism even before seeing this movie.

Since the beginning here, on the contrary, we see the mood and pathos of this story are much more enjoyable.

The alien invasion is peaceful and egalitarian, eliminating many problems and differences between social classes of modern humanity.

Unfortunately, in the same way, the aliens eliminate all kinds of individuality and originality, unifying every mind towards a single collective thought.

However, the human mind is stronger than they imagined, as the two struggling alien souls in this movie will discover.

One of them manages to understand and empathize with the people, even fighting to stay with them.

The other is influenced by human nature in the worst way, being dragged into violence by feelings such as hatred and revenge.

Of course, we have the love triangle that Meyer could not miss, but this time it is funny and intelligent.

Personally, I find The Host as one of the best movies I enjoyed most in 2013.

Furthermore, it can work to introduce anyone, especially young people, to challenging and thought-provoking science fiction.

A filmmaker with few movies but lots of ideas and talent

Considering that since 1997 Andrew Niccol has directed only seven movies, we can’t say he is highly prolific.

However, each of his stories is a particular world that really has something to say about society through its characters.

For example, a short time ago, I recommended In Time, a wonderful Sci-Fi metaphor about modern capitalism ruthlessness.

Probably no other author considered serious by critics would have wanted to bring a Meyer book to the stage.

It is no coincidence that the public and the movie critics in 2013 did not welcome The Host, which recovered just the production costs.

I hope many will reconsider it over the years, understanding the true intelligence behind pure entertainment.

Niccol’s direction works like clockwork with flawless editing and perfect and straightforward staging.

Saoirse Ronan is a beautiful protagonist, young and lively, conveying lots of emotions with her stunning blue eyes.

Here, she plays dual roles of the alien soul and the human voice in her head, grandiosely interpreting both.

Throughout the movie, the relentless Diane Kruger, charming and icy rebel hunter, is on her trail the whole movie.

Finally, we have the impeccable William Hurt as the human resistance leader, called to the most painful and difficult choices.

After all, as this story tells us, we are all different people with different opinions, so be it.

Asian Animation Movies with Kids and...