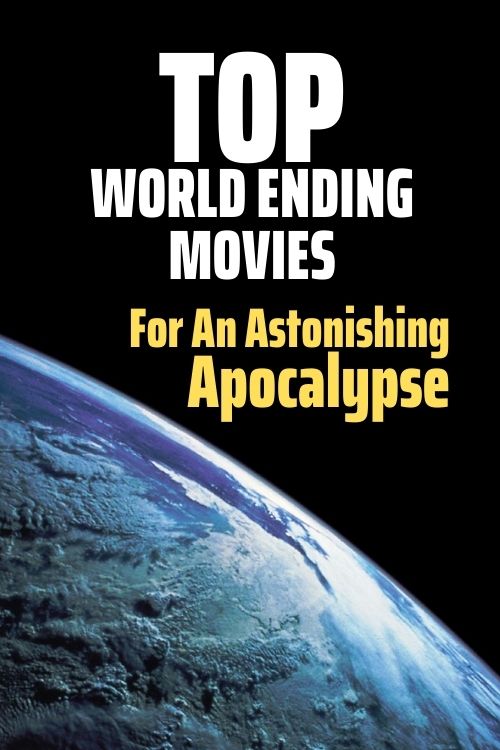 Now safe enough from the 2012 Mayan world ending prophecy, we can finally watch some apocalypse movies in peace.

However, the current period is depressing enough to watch something boring, so let’s lift our spirits with some comedy.

What could be better than facing the ending of everything together with those we hold most dear in the world?

Well, today’s movies approach the apocalypse theme in just this way, by putting a group of friends at the center of the story.

These stories are diverse in style and location, ranging from science fiction to horror and even the meta-cinema.

But the common denominator always remains that of a light-heartedness in the background, succeeding as a perfect entertainment experience.

In the distance, we can already hear the clanking of the hooves of the four horsemen of the apocalypse.

This is never a good sign, so we better hurry up and start these movies.

Then grab the giant bucket of popcorn you can find; there’s a lot to watch before you get to the end.

Five friends reunite after thirty years to return to their hometown, the quiet and isolated Newton Haven.

They aren’t very excited about this trip; indeed, it was one of them who dragged the other four back to where they spent their childhood.

The purpose of this little vacation is simple: to complete a tour of all the pubs in town, downing a pint at each stop.

As youngsters, they had already tried this on their graduation day; however, they ended up drunk or injured before completing the task.

When they return to the city, everything seems to be the same as before, but something strange in the air.

However, the places and people they knew were always the same, so the guys quickly drank one beer after another.

Until one of them fights with a boy in a bathroom, ripping his head off his neck.

The kid turns out to be a robot with a strange blue liquid instead of blood like all his friends.

At that point, they realize that these human simulants have replaced almost the city’s entire population.

Indeed, their old village is just a pawn in the worldwide chessboard of a large-scale alien invasion.

Trying to go unnoticed to save their lives, the friends continue their pub crawl, getting drunk as if nothing had happened.

However, the final judgment looms over all of humanity, unaware of the impending catastrophe.

Incredibly, humankind’s only salvation against these ultra-advanced extraterrestrials will be crude and vulgar stupidity.

The freedom of being idiots

Edgar Wright is among his generation’s best directors, and his Last Night in Soho is among the 2021 best movies.

The World’s End concludes his mind-blowing Cornetto Trilogy, a multi-genre saga of movies.

It started in 2004 with the horror Shaun of the Dead, continuing in 2007 with the action crime Hot Fuzz.

These films are pretty different from each other in staging, editing, and directing.

Yet they are bound by an irrepressible and sometimes zany comedy, the true driving force behind the trilogy.

In addition, they also have in common the actors Simon Pegg and Nick Frost, also returning in this latest chapter.

In this one, Pegg is a 40-year-old punk who has completely failed at life.

Yet wishing to redeem, he returns to his younger, happier days along with friends he hasn’t seen in years.

Involving Frost and everyone else in his crusade, he will find a much more significant challenge than he imagined waiting for him.

Wright naturally and easily mixes the pure science fiction of Invasion of the Body Snatchers with the wild comedy of Animal House.

The action scenes slip comically with style while also adding a dash of romance and nostalgia for times past.

In the end, it still leaves us with hope and a smile, albeit out of the wreckage of humanity to be rebuilt.

Summarizing this movie, it is unmissable like the other ones in this trilogy, firm foundations of a director’s career more unique than rare.

From England, we move to the glamorous Hollywood streets, the heart of American cinema in Los Angeles.

In a luxurious mansion of this neighborhood, James Franco holds a party for some of the public’s most beloved stars.

Among his guests is Jay Baruchel, who is recently in town spending time with his old friend Seth Rogen.

The actor didn’t want to join the party, so he left going to a nearby market after a few minutes.

While he is shopping with Rogen, all of a sudden, like in a movie, the apocalypse breaks out.

The streets open up into deep crevasses full of flames while some demonic creatures start slaughtering people.

Some people, however, are miraculously saved by a ray of light that lifts them into the sky, taking their souls to Heaven.

The two friends immediately flee back to Franco’s villa, where surprisingly, no one has noticed anything.

As the demons tear the fire and earthquake-ravaged town apart, the actors barrel into the house, trying to resist.

However, their selfishness and stupidity pit them against each other, quickly destroying the group.

At that point, some of them go crazy, escaping from the shelter and starting to kill in the streets.

Others, however, try to be good and honest, hoping through deception to redeem themselves and win a place in Heaven.

But in the end, they can’t cheat on who they really are, and for everyone, divine justice will decide.

Friends are more dangerous than demons?

Seth Rogen, besides acting, also directs this world ending movie, together with his colleague Evan Goldberg with whom he also writes the screenplay.

Dialogues and plot ideas are brilliant, seeming at times more stupid and vulgar than original as it is.

The direction sets the stage for a hellish Los Angeles that offers some striking glimpses, despite the comedic soul of the story.

The result is a hilarious meta-cinematic horror movie packed with stars playing themselves amid the apocalypse.

There is a group of selfish and vain movie stars of whom none are worthy of Heaven initially.

Indeed, no one sees the divine light in Franco’s mansion and, consequently, ignores the city’s devastation.

The best comes when they realize that this is a divine event of punishment and redemption.

Then they ridiculously pretend to act cordial to get into Heaven, only ending up making things worse.

The story thrives on ideas one scene after another, such as the irresistible exorcism of a demon-possessed Jonah Hill.

Not to mention the other numerous cameos such as pop star Rihanna, queen of the party.

Or even the famous Emma Watson from Harry Potter, who not surprisingly everyone just calls Hermione.

In short, it’s a film that stages the end of the world for lovers of the Hollywood star system.

A no-holds-barred comedy tearing apart that world’s hypocrisy, demythologizing and mocking it mercilessly.

With the latest movie, we deal more seriously with the ending of the world, yet still ironizing about the stereotype of the Apocalypse topic.

The story is the classic one of people gathering together to spend the weekend in an old cabin in the woods.

Anyone can guess these guys are going for a horror movie massacre, but we get a surprise right away.

Indeed, a group of scientists is secretly following their every move through hidden cameras.

Meanwhile, the group arrives in the woods and settles in comfortably to bivouac happily for the weekend.

As expected, soon after, some monsters attack the house, starting to kill them all without any mercy.

While they try to escape in terror, the scientists carry out a complex magical ritual.

Moreover, they are only one group among many who do the same worldwide, since at stake is nothing less than the survival of all humanity.

These unfortunate boys in the woods are, in fact, the designated victims of a sacrifice to some pagan gods, who would otherwise destroy everything.

But while the monsters slaughter these innocents, something goes wrong, and the ritual is in danger of being compromised.

One of these victims just doesn’t want to die, putting at risk the lives of everyone on the planet.

Indeed, the few survivors will even go on the counterattack, unleashing all kinds of infernal creatures against the same scientists who have created them.

Drew Goddard is a director who just has two movies under his belt, of which this end of the world horror apocalypse is his most famous.

As mentioned, the story isn’t overtly comedic like the previous ones, but the irony is always there to temper what we’re watching.

The two narrative planes of the kids and the scientists proceed parallel for almost a half of the movie, only to meet devastatingly.

But even in the most splatter and bloody moment of the story, it manages to make us smile and have fun.

The most obvious is the boys’ choice at the beginning, handling some objects without knowing they are determining their next lousy future.

The choice determines which monster the scientists will send to kill them, among the hundreds at their disposal in some underground cells.

In revenge, the boys will then open these cells, releasing all sorts of murderous creatures against the scientists.

Therefore it is an homage to a particular type of slasher that many consider, stupidly, as second-rate cinema.

Even if entirely unknown, the cast is pleasing in their roles, except for the Thor of the Avengers, Chris Hemsworth, and the exceptional Sigourney Weaver.

In short, it is a spectacular apocalypse like a few others in a movie that quickly became a cult all over the world.

Waiting anxiously for the following work of Goddard, let’s all have fun together watching these gods Lovecraftian re-emerge pissed off from the underground.