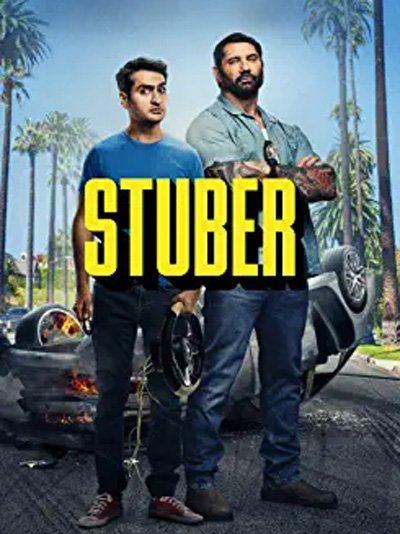 Stuber is the nickname of an uber driver who, unfortunately, pairs with a cop in this buddy movie ride.

While working in a store as a humble clerk, he simultaneously tries to start a gym with a girl.

Further complicating things, he has always been in love with her, now breaking up with her boyfriend.

To rack up some extra cash, he then decides to be a driver for the well-known online ride service.

But he’ll have to serve an exceptional client this time.

In his car indeed enters a policeman obsessed with arresting a trafficker who killed his colleague years before.

The man has a temper, not to mention that he has just undergone laser eye surgery and can see almost nothing.

However, that very day one of his most trusted informants tips him off that his target is about closing a big drug deal.

So he begins to investigate against his boss’s orders since the case is going into the hands of the feds.

Stuber initially tries to be nice, but the cop’s rough ways and thirst for revenge exhaust him.

Involving him in his dangerous quest, the cop gives him no respite ruining a sexual date with his beauty.

Yet, despite being profoundly different, the two men begin to know and understand each other.

By hating and helping each other, paradoxically, they will become better people.

But the dangerous drug dealer has a mole inside the police who wants to kill them both.

So without knowing it, they will walk right into a trap, getting their families into trouble as well.

At that point, both of them will have to put aside their arguments and quickly end the story.

Tracking down where the criminal is hiding becomes their mission before he finds them and strikes first.

The long road to 5 stars

One of the funniest things in the story is this driver’s desire to receive five stars as a rating for his rides.

Stuber is a kind man and always ready for a joke, tolerating the worst rude people in town.

Likewise, he puts up with his stupid co-worker at the store, as he is the owner’s son with a guaranteed job.

Initially, he tries to resist the violent ways of the policeman who is wholly devoted to his crusade.

Yet his patience is repaid with progressive worsening of the situation and destroying his small leased car.

The mirage of positive evaluation on Uber is directly related to his job, as a very random system of judging the service.

I say random because we have seen many reviewers buy and sell positive reviews on social, if not worse.

It is a sick system that has created a market based on threats and slander to damage or improve someone’s reputation.

Therefore we laugh because Stuber is a fun buddy movie with the usual unlikely couple of protagonists against crime.

Even the action scenes are hilarious, and the duets between the two leads are spontaneous and never silly.

Their story is of the classic angry cop and the naive civilian in trouble, united by fate in a long day of danger.

However, we reflect on the injustice like being a uber driver, often underpaid and humiliated every ride.

The world of apps has allowed many unemployed people to find a job, but at what price?

This is all to say maybe this movie isn’t silly as it may appear at first glance, and ultimately we are all a bit like Stuber.

Pairing the big guy with the small one always works?

Undoubtedly, we have seen action crime pairs of this type before, invariably in the comedy arena.

We can remember Arnold Schwarzenegger and James Belushi, for example, in Walter Hill‘s hilarious Red Heat.

Or again, Schwarzenegger with Danny DeVito in Twins by Ivan Reitman, where muscles and irony work wonderfully.

However, we have to be honest and admit that even this movie has its dignity and entertains without problems until the end.

Dave Bautista confirms to be suitable for comic roles and not only action, as we have already seen in Guardians of the Galaxy.

Unlike other actors full of muscles, he also has a great self-irony without being the perfect and indestructible cop.

Even better is Kumail Nanjiani as Stuber, amiable as an old friend we can trust.

He’s a character reminding me of the friendly shopkeeper Apu from The Simpsons, naive and intelligent in a natural way.

The little driver starts the ride as a shy, compliant worker but ends up risking his life to save the gruff cop’s daughter.

Betty Gilpin is also hilarious as the woman he’d like to love, though it would have been nicer to see her for longer.

Of the actress, I recently recommended the magnificent The Hunt, one of the best action crazes of recent years.

Finally, we have the beautiful Mira Sorvino in a small role, not very believable but still fascinating.

As a police captain, however, she will have her place in the plot, making sense of other otherwise unlikely scenes.

I am wrapping up by recommending Stuber to anyone looking for a simple but well-made movie.

It’s a story that I watched almost by accident and enjoying much more than I initially thought I would.