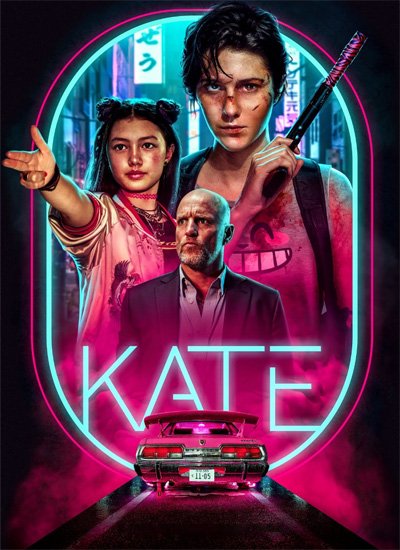 Mary Elizabeth Winstead is the beautiful star of the latest movie, Kate, produced by Netflix.

The actress plays a girl raised by a hitman after witnessing the brutal slaughter of her entire family.

From a young age, the man trains her to fight and use weapons, and in time she becomes an assassin.

However, after many years and successful killings, she is tired of murder and decides to change her life.

The last obstacle to overcome is to close a contract that she and her putative father have been pursuing for a long time.

For the past several months, they have been in Tokyo taking out Yakuza bosses on behalf of rivals who would like to take over.

She meets a man she spends a sexual night with the night before, then heads to her latest job.

However, she begins to feel very ill and misses the shot at the decisive moment, allowing her target to escape.

After being in a car accident, she wakes up in a hospital where she discovers someone has poisoned her with a radioactive substance.

Since there is no cure, she quickly realizes that her time is running out and decides to find out who is responsible for her murder.

But the road to the truth will be full of enemies to do away with in every way while her condition gets progressively worse.

To get to the one she believes is responsible for the poisoning, she kidnaps the granddaughter of the man she failed to kill.

This little girl’s friendship begins to develop, especially when she learns that someone wants to kill her.

Alone against all the yakuza killers in town, these girls will not rest until even the last of their enemies is lying dead on the ground.

Kate is a very simple and straightforward story, but this new Netflix production differs from other similar action movies.

First and foremost is the lead actress Mary Elizabeth Winstead, who I’ve adored since Scott Pilgrim vs. the World.

This actress always ends up in second-rate roles or movies, yet her performance you remember every time.

Secondly, we have some great action scenes, violent but also fun at the same time.

It is no coincidence that the executive producer is David Leitch, now a veteran of modern action.

Indeed, he co-directed John Wick and other excellent movies like Atomic Blonde and Deadpool 2.

Certainly, here we do not reach the level of the famous hitman played by Keanu Reeves.

Yet the various fights and shootouts are spectacular and exciting, without ever being ridiculous.

Again, we’ve seen this in other Netflix productions before Kate, such as The Outsider with Jared Leto.

Not to mention other movies like Ridley Scott‘s cult Black Rain, starring Michael Douglas as the revenge-seeking cop Gaijin.

While taking inspiration from other hits of the past and present, somehow, this story manages to be uniquely entertaining.

The characters are all stereotypical in the canons of the genre, definitely not being very original.

Yet they thrill with their emotionally personal relationships and have some very cool and funny lines.

So even though you know from the first minutes how it’s going to end, the ride is just as good.

Coming towards the end credits, we enjoyed a relaxing merry-go-round of top-notch fights and a clever yet straightforward story.

Feminine and tough as steel

There is no shortage of action women in theaters in recent years, ever since Sigourney Weaver in the famous Aliens.

It’s a contrast of beauty and strength that men like seeing these sexy actresses in roles previously only for males.

Likewise, these roles solidify a specific part of feminists, seeing a heroine play on an egalitarian level, at least in fiction.

Mary Elizabeth Winstead uses her charm well without winking, but with an underlying fragility despite the constant fighting.

Wandering around Tokyo covered in the blood of her enemies, the actress is still fresh and funny in every scene.

In addition, all the funniest scenes feature her, leaving room for some humor otherwise absent in the other characters.

It’s hilarious, for example, when she points her finger at her enemies with the assassin behind her firing bullet after bullet.

The rest of the cast is also good, almost exclusively Japanese, if not for the exception of the ever-reliable Woody Harrelson.

Unfortunately, we don’t see him for a long time, albeit playing the crucial role of the strange adoptive father.

We also mention Jun Kunimura, a great actor of many eastern crime thrillers.

He previously played the boss, under the direction of Takeshi Kitano, in the excellent Yakuza saga Outrage.

In conclusion, I strongly recommend you watch Kate, one of the movies in the Netflix catalog that I liked the most recently.

Far from being a masterpiece, Kate is a movie just as good to have fun without wanting to be overly critical.