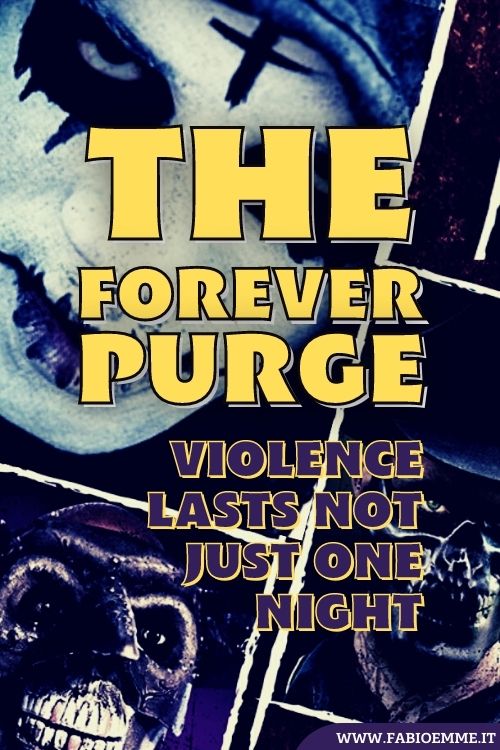 The Forever Purge is the latest 2021 chapter in a dystopian action saga that began and successfully continued in 5 movies since 2013.

A story that is fascinating and terrifying, exposing the violence hidden behind our seemingly peaceful, civilized society.

Even more, these movies exalt the madness of a proud native and gun worshipping part of America.

While dealing with essential issues that span the entire population, these stories are small and personal.

Each time we follow only a few characters, desperate to survive the night of the purge.

But how exactly does this saga work, and, above all, today is it worth watching this latest chapter?

Let’s look together at all these movies, trying to understand what changes in The Forever Purge of 2021.

The purge rules are elementary to remember since they are only a few.

This national slaughter happens once a year, beginning and ending at the sound of emergency sirens.

The population has 12 hours to commit any crime with impunity from that moment on.

There are no police, hospitals, or public services available during this night, which will only resume the following day.

In the movies of this saga, we see Americans committing every atrocity in this short period.

Many take advantage of this to settle personal matters, carrying out revenge that would otherwise be impossible on a typical day.

In addition, many political and military figures use it to fulfill their agenda and strengthen their power secretly.

However, only in this last chapter does it go beyond that, moving from a horrendous one-night ritual to a full-blown civil war.

In fact, after the last night of the purge, some exalted people decide to continue the massacre indefinitely.

These call themselves the Purge Purification Force, declaring that they want to revive the true and pure America.

Immediately panic ensues among the population, and they flee the cities as the police and military cannot curb the killings.

The only escape route seems ironic to be the northern and southern borders of the U.S.

Canada and Mexico open their borders to fugitives, but only for a few hours.

The protagonists of this story, two South American immigrants, must return from the same country from which they came.

But this absurd reverse immigration won’t be simple because the PPF crazies will make them suffer mile after mile.

Indeed almost all of us publicly denounce incidents of violence, ignorance, and racism.

However, even in the small world we belong to, it is useless to deny it. Sooner or later, we are all victims or witnesses of such events.

The purge saga also goes beyond just idiots running around praising Nazism with a gun in their belt.

In this film, those who are scary are the false respectability with a benevolent smile that finally shows their true face.

It is no coincidence, for example, that in the first film, the protagonists resist the siege by a group of well-to-do and well-dressed young people.

After surviving these young sociopaths, they also have to deal with their neighbors with whom they were apparently on good terms.

Or, even worse, in the third chapter of Election Year, the politicians themselves are the real danger, who want to eliminate an inconvenient senator at all costs.

The Forever Purge completely sidelines the politicians, now destroyed by their creation.

Tragically, the purge continues to spiral out of control beyond the one night reserved for it.

Proponents of closed borders should take a hard look at the desperate exodus of Americans out of America.

For once, they too will feel the desperation of fleeing a hopeless country, finding a wall of hostility waiting for them at the border.

These movies, however, do not only deal with the racial and cultural differences between the inhabitants of the united states.

In The Forever Purge, we see how the biggest clash today is between people with money and power and those who have and matter nothing.

For example, the first episode happens in the wealthy neighborhoods where a famous architect lives with his family.

However, their highly technological and safe house is not enough to protect them from the cruelty of the outside world.

After that, the other films drifted further and further apart, starting with The Purge: Anarchy.

The action gets more frenetic as we follow Frank Grillo through the streets of a city full of psycho killers.

In the next film, we will find the actor again as a senator’s bodyguard, as mentioned, fleeing from the rival political party that wants to kill her.

Instead, the fourth movie was a prequel, where these privileged rich and influential people conceived and tested the purge for the first time.

The Forever Purge moves even further away, moving out of the urban context and becoming almost a classic frontier western.

As I watched it, I couldn’t help but be reminded, for example, of the old Stagecoach with John Wayne trying to save the pilgrim’s caravan.

However, even the elite of society must pay the price this time.

And when the outcasts get their revenge on the social disparity between rich and poor, justice rings loud and clear.

Is the story over?

Concluding 2021’s The Forever Purge movie, it seems that the story is finally over, and there is nothing more to say about it.

However, we already know that the production has asked James DeMonaco to write the screenplay for the next movie.

Personally, I’m happy about it, as I think it’s a social and cinematic context that can still give a lot if handled intelligently.

I’m hoping he’ll return to directing since Everardo Gout doesn’t seem to be quite at his level in this chapter.

He comes mainly from the world of TV series, and we see it in the staging and editing a bit hasty and insufficient.

While maintaining the saga’s atmosphere of violent anarchy well enough, he doesn’t seem to have the same skill in pacing the action scenes.

The first three movies, in my opinion, remain the best and most straightforward.

It’s no accident that they are all directed by DeMonaco, a more modern and compelling director.

However, his script still makes a difference, and despite some issues, 2021’s The Forever Purge is a movie that works.

I can not talk about the eponymous TV series, which I have not yet had a chance to see.

The movie saga, though, is still alive and well, adding something to its narrative line each time.

So I don’t think we’ll have to wait much longer, maybe a couple of years at most.

But sooner or later, inevitably, we’ll pick up the fight with America’s obnoxious New Founding Fathers.

Just out of curiosity, let’s imagine who will be in government and how the US policies will be in those days.

What do you people think?

The Purge – All 5 Movies Collection