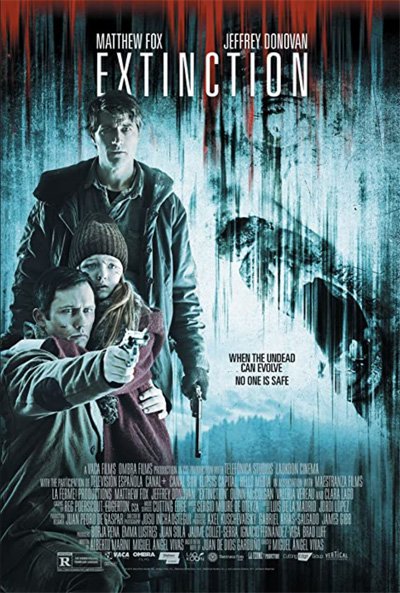 In 2015, Jeffrey Donovan and Matthew Fox, actors are known for TV series, starred together in Extinction, a post-apocalyptic family drama.

The story’s prologue takes place with humanity on the brink of extinction and these men traveling aboard a bus.

Together with a girl, they try to escape the crumbling cities by joining a convoy escorted by the military.

A terrible epidemic infects the people and makes them violent and aggressive, becoming an omnipresent threat to survival.

Suddenly the infected attack their convoy, and in the daring escape, the group barely escapes.

They have found a safe place many years later and live in neighboring houses just outside a small town.

However, something serious had happened in the time since that dangerous evening when they almost died.

The two men are no longer friends, and they don’t even speak anymore, sincerely hating each other.

One of them is raising a child, while the other spends his days drinking and living alone with a dog.

However, the little girl is curious about the strange and silent neighbor, the only one living in the area.

Therefore, she starts spying and trying to know him in order to convince the two old friends to make peace.

They initially seem to have no intention of getting closer; however, they will have to work together again to survive.

Indeed, they thought the infected had disappeared forever, yet they return more aggressive and stronger than before.

Finally, Jeffrey Donovan and Matthew Fox must be friends/enemies fighting side by side for the sake of their little one.

Extinction is a distinctive 2015 movie, focusing on the personal drama between two men and placing it in a global post-apocalyptic context.

The narrative breakthrough happens in that time frame we don’t see right after the initial prologue.

So we are captured by the peaceful and quiet atmosphere of that isolated place, beautiful and charming despite the situation.

While we figure out what happened, other events still occur, revealing the mysteries of the past.

We are then in the little girl’s situation, also unaware of the conflict’s origin between the two friends.

Jeffrey Donovan and Matthew Fox are excellent leads who remarkably portray their characters.

Initially, we tend to side with the man who takes care of the girl, who seems the most responsible and intelligent.

But later, when the plot reveals its secrets, we better understand the self-destructive behavior of the other.

We’re not talking about an action movie or even too much horror, although it has its good moments of both genres.

It is primarily a real psychological thriller, inside daily survival and loneliness routine.

As far as I’m concerned, this mixture works very well, telling a monster story at a slower and more reasonable pace.

We follow the few but well-written characters whose relationships constantly change depending on the situation.

The poor girl’s trust and betrayal evaporate when she realizes the truth, despite their lies.

And eventually, redemption may come, if not the forgiveness that one of these two men has so long desired.

Few and calm is better than lots and messy

Indeed, the general atmosphere of abandonment and desolation further exacerbates the relationships between the protagonists.

Paradoxically, the small town they live in is called Harmony. A harmony is missing among these friends, together only because they have nowhere else to go.

Quinn McColgan plays the little girl who grows up amid this conflict, knowing no one else besides them in the world.

Jeffrey Donovan is the man raising her, thoughtful and obsessive about his girl not being adventurous outside alone.

Above all, he stays adamant about not speaking to their wacky neighbor, evading any questions about him.

The actor is much more composed and calm than usual compared to the Burn Notice TV series, a cheerful agent betrayed by the CIA.

Matthew Fox is also different from what he was in Lost, which was a handsome doctor with a clean face.

In this case, he plays a man in disarray, with no one and nothing but his dog, suffering from alcoholism from which he doesn’t even try to get out.

When he sometimes seeks human contact, his friend brutally rejects and reminds him of the sin he is guilty of.

It is a terrible episode that has marked their friendship forever and that we will only discover in the final part of the story.

In short, 2015’s Extinction is a post-apocalyptic movie very far from the furious pace of Mad Max, I warn you.

Still, if you also like to enjoy an excellent plot and well-written characters besides the action, then it’s something you should try.