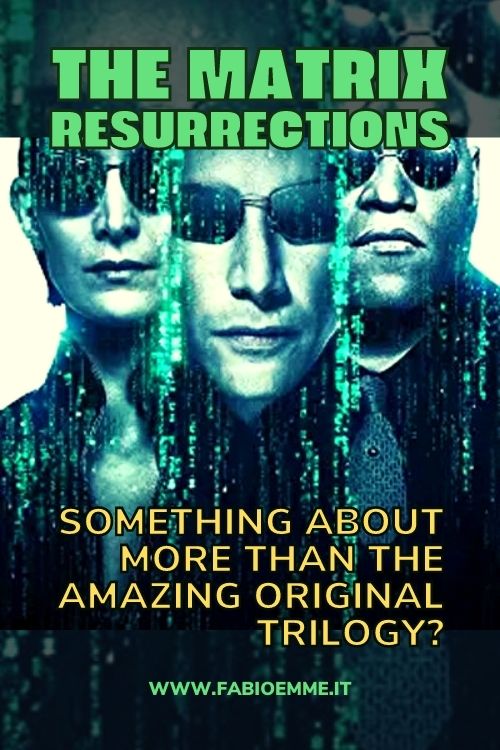 After almost 20 years since the conclusion of the Matrix trilogy, no one imagined what this new chapter titled Resurrections could be about.

The trilogy began just short of the new millennium before the Internet (the real Matrix) finally invaded our lives.

It was 1999 when the first Matrix conquered all sci-fi lovers’ hearts and broke the box office worldwide.

The question I read and hear most about Matrix Resurrections is always the same: was it indispensable to continue the story?

Going back in time, critics and audiences did not all welcome the second or third film as well.

Indeed, while everyone without exception liked the first film, there were highly conflicting reviews for the other two.

Some found the Architect’s endless and complicated ramblings exaggerated, for example.

But he was the embodiment of the most advanced and complex computer on the planet, did you expect anything else?

Others, however, found some of the plot twists and script choices unclear and immediate to understand.

Like the relationship between Neo and Agent Smith, both sides of the same bug/glitch ultimately lead to Matrix rebooting.

Anyway, back to the question I asked before, did this story need a sequel so much, or could it be enough where we left off?

Before answering, let’s take a look together at where we left off and exactly where we’re picking up with Matrix Resurrections.

To quickly summarize, here’s what the Matrix trilogy and the new sequel, Resurrections, are all about.

The protagonist discovers the world he lives in is artificial, a computer simulation under the control of an army of machines.

Why are these machines holding people captive, giving them the illusion that they live in the real world?

Quite simply, they need their bioelectric energy after the human race has darkened the skies, depriving them of precious and unlimited sunlight.

However, some people manage to corrupt this simulation and free themselves, founding an underground city to survive.

This stalemate couldn’t last forever, and then, inevitably, quoting the protagonist’s evil nemesis, it leads to an all-out war.

Yet the nemesis infects the entire simulation, and it is necessary to reboot the system, which happens through the sacrifice of our hero.

At that point, humans and machines establish a new truce, which is where the original Matrix trilogy ended.

Matrix Resurrections begins many years later, with the protagonist alive again without any idea about what life in the previous films consisted of.

However, the feeling of being in the wrong place comes back to haunt him.

All the while, he recovers his love for Trinity, who fought bravely by his side until the end.

She, too, has no memory of who he was before, though she is attracted to him every time she meets him.

Nevertheless, some rebels organize an attack and free the protagonist again, who finally discovers the truth.

A new program is in charge of the Matrix after the previous disaster, exploiting their love to bring the human energy batteries to their maximum efficiency.

Freeing Trinity then becomes the primary goal of the resistance, although not all survivors agree to go to war against the machines again.

All that remains of the original trilogy cast are Keanu Reeves and Carrie-Anne Moss.

Still playing the number one fugitives in the Matrix, in Resurrections, their relationship is even closer about the previous movies.

While the woman before was an unstoppable warrior, now her power matches if not surpasses her companion’s.

When I was at the theater, I heard many people complaining about this twist, especially in the final part of the story.

I honestly don’t understand why. Given the total reprogramming of the matrix, the subversion of the basic rules of the game is obvious.

In addition to the two protagonists, we also have other welcome returns among the various characters.

Their duets are a tasty mix of philosophical dialogue and martial arts with devastating superpowers.

Yahya Abdul-Mateen II embodies the Morpheus digital version, initially a Matrix agent who will help the rebels in the fight.

His fiancée Niobe, a.k.a. Jada Pinkett Smith, is another member of the original cast that we see again, albeit aged sixty years for the occasion.

This time leading to human resistance, the woman will be the least happy to see the main characters again.

In fact, she fears ruining the fragile balance between humans and some machines that have left the matrix.

Refusing to continue the war, these artificial beings wish to live together in a new sanctuary city.

But the new young resistance warriors side entirely with the hero, and no one can stop them from trying to save Trinity.

Twenty years later, do we still get that same feeling about cyberpunk elegance from watching Matrix Resurrections?

Right away, the first impact is slightly different, especially given the high expectations with which we approach this film.

However, that unique atmosphere of mystery and science fiction is still there where we left it.

Everything has changed in this world, we still don’t know how, yet the dark charm of the matrix remains the same.

Trying to be unbiased and not too complacent, I have to admit that the action scenes are the weakest side of the film.

Let’s be clear, the various fights, chases, and shootouts aren’t bad at all and remain top-notch throughout.

But honestly, they are nowhere near the level of the Matrix trilogy from twenty years ago, which was a game-changer.

More, the filmmakers set a new standard and style for all other action movies to follow.

For example, did they introduce the Bullet Time effect, later copied in multiple other movies and video games.

Instead, I heard a lot of complaints about the first part of the plot.

According to someone, they were too stupid and superficial, almost just a filler.

I thought it was brilliant, turning the old Matrix trilogy story into a video game of which our protagonist is the programmer.

And he actually is the one who asks, “But is a sequel really necessary?” to his great enemy Smith during a business meeting.

“Warner Bros. will do it with or without us,” he replies at that point, earning a smile from the entire movie theater.

I think this dialogue says all you need to know about the genesis of Matrix Resurrections.

For the producers, it was simply a brand that they could still squeeze some money out of.

The director didn’t necessarily want to make a sequel, but since it was (again, quote Smith) inevitable, then why not?

Lana Wachowski preferred to take over rather than leave it at the mercy of someone else’s highly questionable choices.

Leaving it exclusively in the hands of the Studios and their terrible marketing experts; who knows what would have happened.

Thankfully, we didn’t have to find out.

I really loved and enjoyed all the choices about Matrix Resurrections for those still wondering.

I admit that I also went to the cinema extremely afraid the sequel would spoil into a ridiculous buffoonery.

On the other hand, I was also confident about Lana Wachowski‘s skill, who never loses a beat with her sister Lilly.

The story works as far as I’m concerned, never being stupid, trite, or boring.

Picking up where we left off, we return to the epic of our heroes again in that same magical atmosphere.

Characters keep having the same charisma, whether they are human or sentient matrix programs.

I believe that even the fiercest critics cannot question the staging and costumes.

As in the simulation, colors are vibrant and exciting, even in the real world where life is starting over again.

As I’ve tried to explain, many of the complaints I’ve read about the plot seem to be absolutely silly.

We’re talking about science fiction, I think, so a detachment from realism is absolutely (again, quoting Smith) inevitable and necessary.

Indeed, unlike the mystery about the original trilogy, Matrix Resurrections seems much more straightforward and understandable.

So let’s all put aside the good goggles going in search of flaws and try always to enjoy the science fiction of the Wachowski sisters.

Whatever you think, the movie is a tremendous and exciting spectacle of action, philosophy, and it feels exactly as it once was.

In a hundred years, this saga, rest assured, will continue to have its fans. While the insults and sneers will end up in nothingness from where they come from.

Tully – An American Life On...