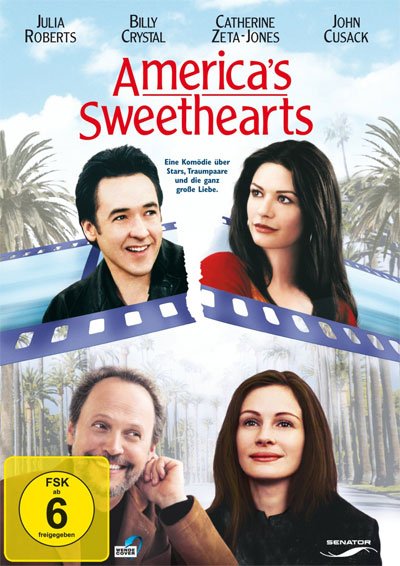 America’s Sweethearts is a hilarious 2001 movie about the hypocrisy and fake shine of the Hollywood golden world.

The story begins on the eve of an expensive blockbuster starring America’s most famous sweethearts, Eddie and Gwen.

Everything seems to be perfect, in theory, with a famous director directing these two beloved actors on a multi-million dollar budget.

However, when the producer asks him to preview the film, he incredibly refuses.

Claiming he intends to experience the premiere with the press, he doesn’t even send a minute to watch to them.

At that point, the entire studio panics, calling upon their top publicist to work something out and solve the problem.

To divert the attention of the press, who expect them to talk about a film they have not even seen, the man has a brilliant idea.

He decides to focus everyone on Eddie and Gwen, who have now separated for months after a stormy woman’s betrayal.

The actor reacted very badly when he discovered her with another man, trying to run them over with his motorcycle.

After that, he locked himself up for a long retreat in a monastery under the spiritual guidance of a wise guru.

Everything seems to be totally contrary to a reconciliation between the two lovers that the public wants.

But the publicist, fortunately, is not alone and can count on the help of the actress’s sister.

The girl is indeed extremely clever at convincing the capricious star to do what she must.

When everyone goes to a desert hotel, they must stall the press while waiting for the director to arrive with the film.

But of course, everything that can go wrong will go wrong, and disaster seems imminent by the minute.

The Hollywood stars inside and outside the movie screen

Of course, we all realize that cinema is just fiction, but how much do we identify actors with the roles they play?

America’s Sweethearts asks us this question in the form of a hilarious, fast-paced comedy movie.

This story mocks America’s sleek and expensive star system and the stupid production choices which have little to do with art.

So we see these stars who are the center of their world, oblivious to others.

Just as they are charismatic in the movies, they are just as self-absorbed and stupid in real life.

Around them revolve dozens of slaves who aspire to success, ready to satisfy their every desire and whim without hesitation.

This doesn’t just apply to the actors, of course. Indeed, we also see producers and their subordinates going about their business like so many mindless ants.

In this world, everyone has a boss to answer to in one way or another.

Above it, indifferent and calm, is the director figure who is a phenomenal Christopher Walken.

In the end, it will be him to fool all the others, realizing his little masterpiece of total cinematic realism.

I would have liked to see a lot more of a character, but unfortunately is only present at the beginning and end of the film.

In between, we have lots of laughs, betrayals, and misunderstandings turning this premiere into a hilarious madness circus.

Not to mention, then, that pinch of additional romance that always does good to heart and soul at all times.

In short, if you want to laugh without too much Hollywood commitment, I wouldn’t recommend a better movie.

A top-notch cast in all roles

America’s Sweethearts really has an impressive cast of real stars as a movie about promoting movies.

We begin, of course, by introducing the two great faces of these sweethearts, around whom the whole story revolves.

John Cusack is a perfect wounded lover, lost and confused, though still deluded that he can win back his lady.

The actor plays an unfortunate man but with his dignity, although he is also arrogant and conceited in his way.

Simply magnificent is Catherine Zeta Jones, in a role stupid and obnoxious but no less sexy and charming.

The total self-centeredness she gives to her character is a love to watch, as much as she is insufferable to other characters like her sister.

Julia Roberts is this girl who is totally there for her sister. With her famous smile, she should keep her good, but she ends up being overwhelmed by feelings as well.

Finally, above them reigns the always irresistible Billy Crystal. He’s unquestionably the best comedian in the cast here, always dictating the pace to everyone else.

Again, the actor demonstrates his unbeatable irony and intelligence, excellent in the chorus as in his alone scenes.

I almost forgot, we also have a perfect Stanley Tucci who, with great self-mockery, plays the pedantic and idiotic film producer.

In conclusion, America’s Sweethearts is a movie in which an actor of the highest level every minute, ready to make you laugh.

Back in 2001, it sold well at the worldwide box office, yet not as other Rom-Coms as Pretty Woman or When Harry Met Sally.

So I would say that enough time has passed to dust it off, admire it and laugh with it one more time.