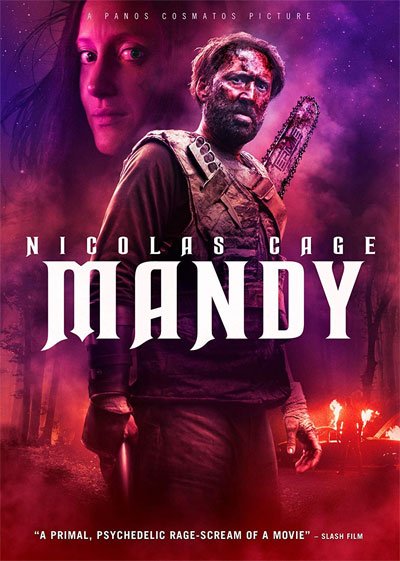 Some films don’t have a new and original plot, like 2018’s Mandy, yet somehow succeed in being fresh and original.

The story begins with a humble lumberjack returning home after a hard day’s work.

Waiting for him in his remote lodge is his lovely wife, an artist passionate about science and reading.

He would like to move to another city, where perhaps he could more easily find another job.

Yet she loves that place in the middle of nature, where she feels more comfortable than in a crowded city.

But in the middle of the night, a gang of strange individuals breaks in, attacking and immobilizing them.

Their leader is a religious guru whom they all follow faithfully, carrying out any of his orders.

The man had seen the woman while walking in the woods alone, immediately wishing to have her for himself.

However, the woman humiliates and taunts him, hurting his pride, so he brutally kills her in front of her husband.

Miraculously surviving this horrible night, the man then decides he wants revenge at any cost.

However, a friend of his is familiar with these lunatics and warns him that they are a former drug mule gang.

Even their supplier became tired of their brutality, supplying them with a poorly produced batch of acid that made them permanently insane.

The widower, however, has nothing to live for anymore except the revenge of his lady loves, whom they took away from him.

So he forges a weapon to kill this gang, going on a journey he is sure he cannot return from.

Style and imagination sometimes matter more than the story

As said from the beginning, 2018’s Mandy is a film without a story or characters we haven’t already seen elsewhere.

For example, we could say that it basically has the same plot as The Crow with the late Brandon Lee.

He would also return to life and avenge his sweetheart one year after a bunch of thugs savagely took her away from him.

Look at the magical colors with which he describes the two lovers in the woods at the beginning, almost as if it were a sweet fairy tale.

These same colors become the endless hell of a delirious nightmare amidst psychopathic and bloodthirsty latex-clad bikers.

In this context, the ordinary working husband becomes a bizarre avenger who eventually becomes as insane as the men he seeks.

The man forges from himself a kind of spear that will accompany him on his journey, almost as if he were a mythical hero of the Odyssey.

However, the violence he is about to face will leave indelible scars on his mind, turning him into a grotesque mask of hatred and resentment.

There is no hope of redemption or forgiveness for any of these characters, just as revenge brings peace and satisfaction to no one.

These souls all get lost in the woods, again like a fairy tale, only this time of the scary kind.

2018’s Mandy is not the usual cinematic revenge from other films, becoming truly different and fascinating every minute.

Can we still appreciate good cinema?

Honestly, talking about Nicolas Cage confuses me and makes me a little indecisive every time.

That’s because there are movies where I appreciate him and others much less so, especially in recent years.

It probably doesn’t even depend on his acting skills, which we have already seen in numerous movies.

Masterpieces like Wild at Heart and Raising Arizona, to name two, have already established that he is a great actor.

He’s been participating in too many productions lately, perhaps because of money needs, and therefore they can’t all be good.

Here his neurotic insanity is perfect for this role, just as he is equally a loving husband at first.

Even better is Andrea Riseborough as his wife, who has natural beauty without being a supermodel with a perfect physique.

Nonetheless, she makes our hearts flutter, playing an intelligent, romantic woman who lives for her art and her husband.

She seems flirty with us in a few scenes, swimming in a lake and staring through a bonfire’s flames.

Also perfect is Linus Roache, a psychopath with religious tendencies who falls in love with her at first sight.

His delirious sermons are both funny and terrifying at the same time, just as his character is both scary and pathetic.

Finally, I want to mention the cameo by Bill Duke, the green beret Arnold Schwarzenegger eats for breakfast in Commando.

To sum up, director Panos Cosmatos makes a work of art to be admired and understood before judging it.

That’s why it saddens me that they tried to belittle and ridicule a film this 2018’s Mandy on the web.

And in conclusion, if you ever get a chance to see it, I can only hope that you will not be as prejudiced as they are.

3 Famous Movies made by Female...