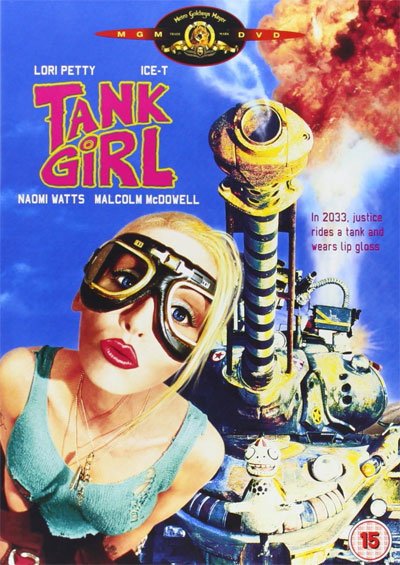 This story takes place in the distant future when the catastrophic comet crash reduces the Earth to an immense desert.

An evil and ruthless businessman leads this corporation, which owns most of the last potable water reserves.

In this world, a sexy and cool female warrior and her fellow renegades make petty thefts to survive.

However, the D&P soldiers find and kill them almost all, imprisoning and locking her in their headquarters.

The boss attempts to snap her will by cruelly torturing her, yet she resists making him even more furious.

Pretending to help them track down a mysterious group of rebels, she breaks free and steals a tank.

She saves a mechanic’s life who can fix it, happy to leave that place of stupid, oppressive males.

Our heroine thus finally becomes Tank Girl, while her trusty friend will instead be Jet Girl.

Together they venture back into the desert, searching for the mysterious rebels to fight the final battle against the D&P.

However, the evil corporation hasn’t given up on hunting them down and kidnaps a young friend of theirs to expose them.

Therefore, the rescue mission comes before the war, while the rebels they find will be even stranger than they imagined.

The two girls will then be at the center of a small revolution to free what’s left of the human race from oppression.

Tank Girl is a movie deriving from a little-known 1995 Comic, as Lori Petty and Naomi Watts weren’t famous back then.

What it does best is finally making a post-apocalyptic fun story that wasn’t easy or ordinary.

This world and characters are colorful and absurd, becoming an ironic metaphor for a dying society behind stupid corporate concepts.

In the absence of water, corporations distill it directly from people, taking the concept of human resources to another level.

Therefore, when it comes to capitalism, everything is constantly changing without ever really changing.

In this post-apocalyptic world, advancing careers seem to matter while accumulating power and money on top of the weakest.

Tank Girl is the living negation of this way of thinking, a girl who makes the joy of sharing her way of life.

While she may seem crude and vulgar at first glance, she and her Jet Girl are the peaks of femininity.

Together they combine passion and madness with a maternal desire to protect that ends up encompassing the whole world.

Their unique tank then looks like it’s straight out of an Andy Warhol nightmare on hard drugs.

Equally funny are the kangaroo guerrillas of the desert, which a scientist creates in a lab only to take pity on them and spare their lives.

Initially, they appear to be monsters with no feelings, only to reveal they’re almost puppies looking for affection when their master disappears.

In conclusion, this cartoon is a democratic celebration against the cold greed of those living only for their interests.

Smart and entertaining feminism from other times

Lori Petty and Naomi Watts work great, although unfortunately, we won’t see them together in any movie after this 1995 Tank Girl.

While Naomi Watts had yet to become famous, we admired Lori Petty a few years earlier in Point Break.

Indeed, she was the sexy ocean lover who taught FBI agent Keanu Reeves the magic of surfing.

However, I think this character is even better, conveying more directly the versatile madness of this underrated actress.

Even the male cast is excellent, with, of course, the superb Malcolm McDowell above them all.

The excellent star of A Clockwork Orange is always polished and elegant, crafting a hilarious and terrible villain.

Ice-T is also perfect as one of the kangaroo soldiers, tireless warriors, and shy and awkward with the two beautiful girls.

Finally, we also remember Iggy Pop‘s cameo as the nasty Rat Face, who runs a brothel where the villain imprisons the girls.

The director is Rachel Talalay, who unfortunately has not made many movies but worked extensively in TV series such as Supernatural or Doctor Who.

However, she recently returned to theaters with A Babysitter’s Guide to Monster Hunting, which I, unfortunately, have not seen.

The director finds a way to push a feminist ideology intelligently, without being pedantic or oppressive.

In the ruins of a broken world, it was straightforward to slip into social drama and despair.

Instead, the beauty and sympathy of the characters always leave the viewer breathing room to enjoy the show.

If you have not yet seen this movie fix it immediately, you may rediscover a buried gem of the 90s.