In Time – When money and power make us slaves 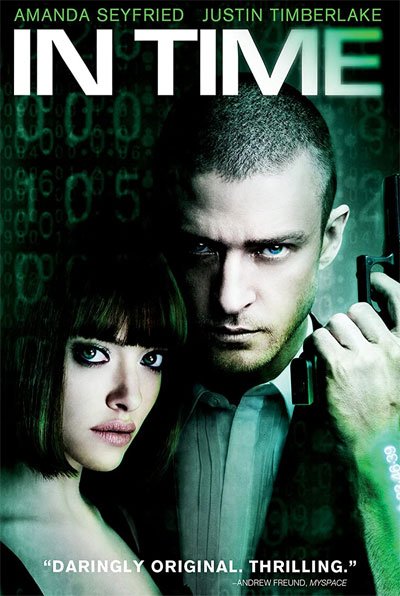 In Time is a cruel metaphor on the power of money by Andrew Niccol, inside this magnificent dystopian sci-fi movie from 2011.

This near-future premise seems almost positive since science discovers how to prevent all diseases and aging.

At the same time, however, banks and world governments determine financial transactions will no longer be done with money but in time.

Therefore, currencies worldwide, such as the dollar, the pound, or the euro, will disappear forever.

They are replaced with minutes, days, and years of people’s lives, expendable for any purchase.

Each person is born and grows up to twenty years, after which he stops aging but must increase his credit every day not to die.

In this world, a young worker sees his mother die when she can’t earn enough time on her daily paycheck.

Distraught and alone, he begins to wander the slums, no longer knowing what to do with his life.

When he meets a man rich enough to have over a century on his account, though, everything changes forever.

Tired of his life and comfortable meaningless, this man suicide and passes all his time to him before dying.

Finally rich after a life of hardship, the boy decides to make his way among society’s privileged elite.

But the police arrested him almost immediately, believing that he had killed the man who had given him all that time.

Then, the boy kidnaps a powerful politician’s daughter, so rich that he has millions of years to live.

At first, she doesn’t understand it, but slowly she realizes that the real monster is people like her father.

Together they will begin a series of heists, trying to destroy that world of social separation between classes.

When time is money every minute matters

Although In Time scored good money at the box office in 2011, critics received it discordantly.

Some welcomed the brilliance and writing ideas, especially when many movies are increasingly moving towards simple entertainment.

Others, however, protested against the fierce Marxist critique underlying the story, branding it as mere political propaganda.

The story is a realistic mirror of today’s world, sadly devoted almost exclusively to personal gain and success.

It is no coincidence that one of the first rules of capitalism is TIME IS MONEY, which in this movie is more valid than ever.

The characters are relatively relatable to stereotypes, but that doesn’t mean they’re stupid or trite.

In contrast, despite the deliberately youthful look of the entire cast, the story is very mature and violent.

So the protagonist becomes the rebellion leader, just like his father many years before, always running from the law.

In a world where lives are so long, the same cop who caught the father will also hunt down the son.

This destiny repeats itself like a sad ballet, like an endless circle where protagonists always finish in the same place.

Finally, it is intriguing how the rich and poor realities are as close and yet on opposite sides of the social power wall.

These realities are incompatible, like two planets millions of light-years apart, from which nobody ever should enter or leave.

So when the two boys fall in love, they violate a line they were never supposed to cross.

Both will then have to climb the insurmountable steps of social differences to finally be together.

Few like him can handle the pace of action and romance so well, building a world so intriguing and scary at the same time.

If we have the drama in the first part of the story, then the hero’s revenge who fights the established order comes.

Here In Time becomes almost like 2011’s Bonnie and Clyde, a movie of robbery and love set in an oppressive society in the background.

Justin Timberlake is in his best film role yet, a rebel with nothing to lose determined to fight the world or die trying.

He may not be the best actor in film history, but he does his job decently without seeming over the top or ridiculous.

We have the sexy and talented actress Amanda Seyfried by his side, definitely better.

Daughter of a rich and almost immortal businessman, she rebels when he doesn’t pay any ransom to free her.

Then, she begins seeing things through poor people’s eyes, understanding injustice permeating everything in the world.

Finally, the consistently excellent Cillian Murphy is a cop who wants to catch the fugitive at any cost.

As mentioned, he had fought the boy’s father years before, and now he makes his capture a personal matter.

In conclusion, I struggle to find anything to complain about in a movie like 2011’s In Time.

The pacing never bores and leaves time to savor the story and characters, which the director writes and directs perfectly.

What more could you want from a dystopian science fiction movie?

I hope you agree with what I have written and that it will also enthuse you.

Otherwise, please go ahead and explain why you didn’t like it in the comments. I could be wrong.