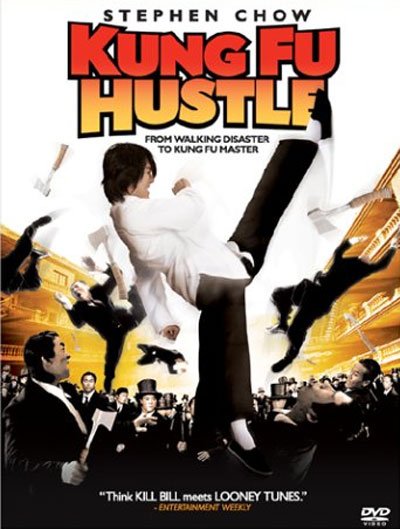 Kung Fu Hustle is an Oriental cinema masterpiece of 2004, the best movie by that little genius of director Stephen Chow.

It is unmissable for all manga lovers because nothing has ever been closer to eastern cartoons than this movie.

In old 1930s China, the story unfolds where gangsters battle for power by bathing the streets in blood.

Ancient martial arts masters, once sacred protectors of the weak, are on the verge of disappearing for good.

Exterminated by the fearsome Axe Gang, the few survivors take shelter in poorer neighborhoods where there’s nothing to steal.

The worst is Pigsty Alley, where two vagrants accidentally unleash the murderous fury of the Axe’s violent henchmen.

To protect the defenseless inhabitants of the crumbling tenements, some masters return to battle, easily defeating their numerous opponents.

Unfortunately, their reappearance does not go unnoticed and will lead to a new escalation of violence and revenge.

Those two drifters and slackers who caused this mayhem will regretfully be in the center of this war.

To make up for the trouble they’ve caused, the Axe Gang forces them to free the world’s deadliest assassin.

The man is a super-fast Kung Fu fighter, yet he’s been behind the doors of a criminal asylum for years.

His morbid obsession with martial arts will go far beyond his desires to conquer criminals.

Ultimately, his goal is proving his strength by fighting the best masters left, picking up where he once left off.

However, an ancient prophecy hangs over them with a supreme warrior bringing an end to all these conflicts.

Ready to fight and laugh out loud

When I saw Kung Fu Hustle in 2004, it was as if Stephen Chow somehow turned my beloved childhood cartoons into a live-action movie with real actors.

Every scene is over-the-top and unrealistic, yet without missing a few dramatic and romantic moments as well.

The fights are some of the most beautiful, fast-paced, and hallucinatory battles I’ve ever seen in my entire life.

It reminds me of the duels between Neo and Agent Smith in The Matrix trilogy to give you an idea.

Not surprisingly, as in the Wachowski sisters‘ films, Woo Ping-Yuen is behind this magnificent choreography.

Exaggerating every punch and kick with omnipresent humor, I think the result is perhaps even better.

Anyone who ever saw a Dragon Ball episode will understand what I’m talking about, which you rarely see in theaters.

Characters fly like bullets off the screen, smashing through walls and entire buildings with their bare hands.

Like the best Street Fighter-style video games, they display an exhilarating sampling of moves and special abilities.

Despite the ironic atmosphere of the whole story, the staging and costumes are strictly perfect, and the style of the direction.

The construction of Pigsty Alley is as magnificent as Sergio Leone‘s classic western villages.

Not by chance, again, he was another author who was a genius and extraordinarily ironic and irreverent.

I do not make a comparison lightly, but I am extremely serious about recognizing the director’s incredible talent.

So the dirt, blood, and poverty become elegant, and every fight becomes the perfect choreography of a harmonious ballet.

Although it’s a straightforward 2004 entertainment movie, Stephen Chow crafts Kung Fu Hustle even for the finest of cinephile palates.

So many different faces to punch!

Besides directing, Stephen Chow also plays the role of an ignorant thug who has an appointment with destiny.

Therefore, we can also admire his great comic nature and his great skill and physical preparation in the fights he performs.

His inseparable friend Lam Chi-chung is a fat, slow, and stupid but equally lovely and faithful companion of raids.

The other characters are no less as madness and originality, but I would like to dwell on the ones I enjoyed the most.

The first is the hilarious and lethal Landlady, the absolute mistress of Pigsty Alley, with the fierce and irresistible face of Yuen Qiu.

This poor man’s queen is unforgettable, as well as being a natural hard hitter when forced to fight.

Also funny is Yuen Wah, the husband who constantly struggles to contain the lady’s temper, putting up with her deadly screams every day.

This Kung Fu titan who had locked himself up in an asylum by himself, bored of not finding an enemy worthy of his time.

But now that the old masters have come out of the woodwork again, he can’t wait to get back into battle, heedless of who will win the final confrontation.

Over the years, this Eastern gem became a cult phenomenon of which many fans demanded a sequel.

Sadly, a request since 2004 remains without response, even though Stephen Chow has repeatedly said a movie would follow Kung Fu Hustle.

For now, therefore, let’s admire this memorable and inimitable example of martial arts film mixed with a gangster comedy of yesteryear.