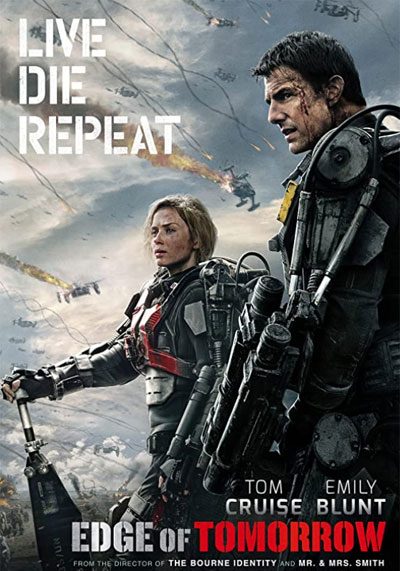 Edge of Tomorrow is an intriguing 2014 sci-fi action film starring the pair of stars, Emily Blunt and Tom Cruise.

The film begins with humanity at war against the aliens, who threaten the entire world after invading Europe.

After years of stalemate numerous losses among soldiers and civilians, the human army is exhausted and discouraged.

On the other hand, the extraterrestrial enemy seems to become stronger by improving and learning human tactics after every single battle.

Amid this unpredictable political climate, a young officer tries to bribe and blackmail his commander into avoiding fighting.

In response, the commander has him arrested for treason and sent directly to the front as punishment.

On the eve of a major assault by Allied forces, the inexperienced young man must go to the battle line.

Having never fought in his life and without any help from his fellow soldiers, the man ends up immediately killed.

However, just before he dies, a different alien from the others is shot nearby and covers him with its blood.

Inexplicably, the soldier wakes up alive again, going back in time to the morning just before the big attack.

When the incident recurs several times, he uses his knowledge to investigate what is happening to him.

He then visits a famous female soldier whose courage and skill had turned the tide of a great battle.

He discovers that she went through the same experience, continuing to die and reliving the same day each time from the beginning.

Trying to prevent the great war from ending in a massacre of the human army, the two soldiers try a desperate plan together.

The only way will be to seek out and kill the leader of the aliens, an invincible being who manipulates time by predicting the enemy’s every move.

Edge of Tomorrow is a sci-fi reinterpretation of the famous Groundhog Day with Bill Murray, replaced by Emily Blunt and Tom Cruise.

Instead of a comedy, we have a war story with an alien invasion background, but the concept is still the same.

The protagonist’s advantage is indeed the experience coming from reliving the same events repeatedly.

Not only does his skill improve with repetition, but he also becomes a better person than the egotist he was at the beginning.

The relationships between the various characters develop in an entertaining, although after a while ‘inevitably repetitive.

Plus, in the end, all these soldiers are almost a backdrop and company for the two protagonists, much better described.

The choreography of the action scenes is quite adequate, making the battlefield dirty, violent, and cruel as it should be.

Also fascinating are the mechanical exoskeletons to upgrade human soldiers, which reminded me of those in.

This mechanical enhancement increases their strength and arms them to fight at the level of the aliens.

Given the near-future setting, perhaps it would have been nicer to see other such technologies and more sci-fi weapons.

However, the entertainment is assured, and the story’s pace proceeds at great speed without unnecessary or dull moments.

If we are going to criticize something, I would have liked to know a little more about the backstory of the aliens.

Instead, unfortunately, they are simply the usual stereotypical conquering villains with never a moment dedicated to them.

But that doesn’t ruin the show, which was impressive within the theaters, and now we can revisit it in our homes’ comfort.

The Bourne Identity director rightly stays in his comfort zone of the genre he knows best, adventure.

Utilizing his skills behind the camera, he undoubtedly makes the fight sequences the best part of the movie.

Therefore, the film becomes a pleasant military world and buddy movie between male and female soldiers.

It is a world where aliens are the common enemy that, for once, unites humanity under a single purpose.

Tom Cruise plays a character who is initially despicable, weak, cowardly, and indifferent to human destiny.

But when he has no choice and must go into battle, he soon learns what’s going on in the world and finally tries to do his part.

On the other hand, Emily Blunt plays a warrior of great charisma and is also very sexy.

The troops fear her and mythologize her at the same time, making her like an idol to take inspiration from.

Initially, the woman had the same power and believed she could finally find the master alien mind and destroy it.

After losing her time loop, though, she loses courage and has no further hope of winning against the aliens.

The arrival of the young soldier restores her confidence, fighting the epic final battle without hesitation.

Edge of Tomorrow grossed a whopping nearly $400 million worldwide and was one of the biggest hits for Emily Blunt and Tom Cruise.

In my opinion, it’s a well-deserved win for a film that, although it rehashes a plot we’ve seen before.

Yet it does so in an original and spectacular way, making everything fresh and attractive again.

To sum it up, it’s great entertainment for everyone and absolutely a must-watch for fans of time loops and alien invasion.