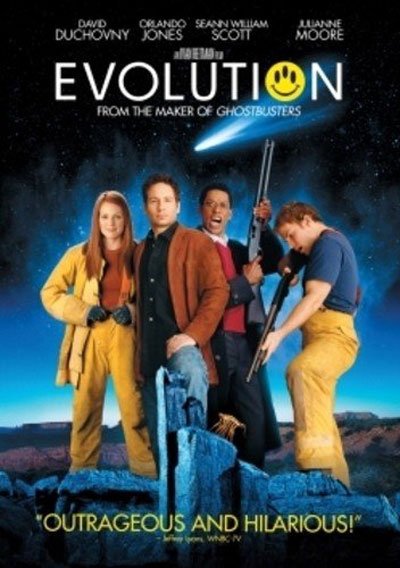 In 2001, in the wake of his highly successful movies like Ghostbusters, Ivan Reitman brought another of his great comedies, Evolution, to the cinema.

Once again, the brilliant Canadian director combined sci-fi with laughter in his unique and inimitable recipe.

The story begins in the Arizona desert, close to a small town, where a meteorite crashes down during the night.

Enthusiastic about the event, two professors from the local high school go to the site to investigate.

The meteorite went through the ground, sticking in the depths of a small natural cave.

When the two friends descend to the inside, they discover the spatial rock has a slimy alien substance covering it.

Taking it to the school’s labs for analysis, they astonishedly learn that the substance is teeming with microscopic life forms.

At the same time, all over the city, strange creatures begin to attack people.

The beasts arrive directly from the meteorite cave, moving under the city through underground galleries.

When the teachers return to the accident scene, they find a nasty surprise, though.

During their absence, the military arrived in a hurry, guarding the entire area and preventing anyone from getting through.

Then begins a fight for the authorship of this scientific discovery, from which our heroes come out losing, unfortunately.

While the military plans a total napalm bombardment, the scientists realize they must intervene before total disaster strikes.

Who ya gonna call?

Ivan Reitman is one of those auteurs who marked my adolescence with some of the best comedies in film history.

The most famous is Ghostbusters, which is currently in theaters the latest chapter of his son Jason Reitman.

Then again, I might remember the fantastic 1988 Twins, which was perhaps even better in terms of plot and characters.

Also, the film was the first to feature Arnold Schwarzenegger in a comedic role, supporting the fantastic Danny DeVito.

Even in that case, there was a good sci-fi premise underlying the story, with a genetic experiment gone awry.

That’s the common element that ties these movies together, including this wild and compelling 2001 Evolution.

This story perfectly combines excellent humor with the appeal of sci-fi genre mysteries.

The plot progresses intriguingly and cleverly, but always with many memorable moments of hilarity one after another.

Indeed, it is impossible not to admire the brilliant creativity of all the creatures in the ecosystem of this movie.

You can not help but laugh at the fantastic ideas of this director, an inexhaustible source of comic inspiration.

The situations and misunderstandings are exaggerated and funny without becoming sleazy and vulgar.

Like me, I think you will find yourself, several days later, to recite by heart some of the gags in the clashes with these aliens.

Even watching it repeatedly, you will still laugh even if you know them by heart, like all great classic comedies.

In short, the DVD of this movie is a must in any collection and is suitable for every occasion.

Of course, for the comedy genre, it’s essential to have a cast that’s up to par and a director who can handle the pace.

Needless to dwell further on the skill of Ivan Reitman, whose career defends itself and is before everyone’s eyes.

So let’s start from the pair of two friends protagonists, a more severe scientist along with a hilarious gym teacher.

The first is David Duchovny, already comfortable with aliens after countless episodes of the famous X-Files.

We have then admired this actor’s comic skill, in films like this or as a sexual animal in the series Californication.

His friend Orlando Jones is then a guarantee in comedies, with his irrepressible behavior and a smile inspire sympathy at first sight.

In addition, the brave but idiotic, aspiring fireman played by Seann William Scott helps the two teachers against the invasion.

The lovable actor was already one of the best protagonists in the saga of American Pie, but here every scene with him is literally to remember.

Performance of which, for example, I saved on my desktop his little clip in which he hilariously sings to flush out a flying creature.

Finally, we can not forget the consistently excellent Julianne Moore, a world-class actress who is sympathetically playing the game by making fun of herself.

Moreover, even though her role is that of the shy and clumsy scientist, she still can be incredibly sexy and attractive.

Summing up, as you can see, Evolution has what it takes to satisfy every comic taste, remaining one of the funniest movies of 2001.

If by chance you haven’t had the opportunity to see it yet, run immediately to get a copy, I’m sure you’ll love it at first sight like me.