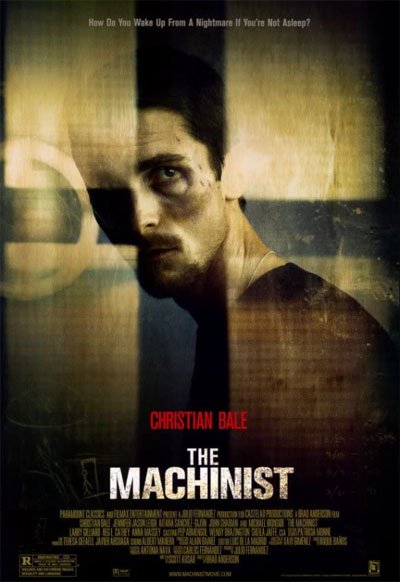 Just before Christian Bale became definitively famous with the Batman saga reboot, in 2004 he starred in a small movie called The Machinist.

This story may not have been as spectacular as Gotham City Knight, but it was much more unique and exquisite.

In short, we follow the life of this ordinary factory worker, who lives alone in his apartment.

His physical condition seems severely weak since he is extremely underweight and can not get any sleep.

Watching him at work with his friends and colleagues, we understand his situation has been deteriorating over the past year.

Every night, he walks around and cleans his house or gets into his car to get a coffee at the airport bar.

There is a waitress there with whom he likes to chat and with whom we understand he has fallen in love.

This woman is one of his few human contacts, aside from a prostitute with whom he has casual relationships.

Everything changes, however, the day when an accident occurs in the factory, for which all his colleagues consider him responsible.

Indeed, one of his friends remains stuck in the machinery and gets seriously injured right before his eyes.

At the same time, he meets another mysterious worker whom no one seems to know anything.

On the contrary, this disturbing and obscure character seems to know a lot about him and begins to torment him relentlessly.

Increasingly helpless due to his physical and mental condition, he comes close to a total breakdown in his life.

His only chance lies in the relationship with the airport maid, who also seems to be hiding secrets he wants to discover.

The truth behind everything will be hard to bear yet inevitable if he wishes to find peace of mind and conscience.

The thousand faces and bodies of Christian Bale

The Machinist is a movie where Christian Bale reaches the ultimate artistic maturity.

Indeed in almost half of the scenes, the actor is entirely alone, carrying out an extraordinary solo performance.

A terrible secret is hidden in his every gesture and fatigue in his suffering eyes, distant and lost.

According to a method of complete identification, it was a rigorous process to interpret this hallucinatory character best.

Just as crazy will be his training to become Batman, putting on muscle in record time for the production schedule.

As much as fans love him, I still prefer this other interpretation, especially for this superhero.

The character of this blue-collar guy is much more complex and requires a much more rigorous commitment and acting ability.

Without having a pre-established world like DC Comics, it also meant that the script was much freer to experiment with.

In a movie like The Machinist, every sequence hides clues to understand the true story of Christian Bale’s character.

This makes it beautiful to watch over and over again, discovering each time a small detail that we had previously missed.

It’s not easy to tell a story with the proper narrative depth these days.

Too many people are used to the pace of action movies, where everything progresses with great speed.

So it only takes one dialogue or silent scene too long to lose the audience’s attention.

Don’t take that personally if you feel the same way, but it takes some open-mindedness to deal with specific stories.

I enjoy DC or Marvel franchises, and I would like these independent gems to have the same attention and consideration.

A humble machinist for an unforgettable little masterpiece

Brad Anderson is a director who caught my attention way back in 2001 when I saw his scary Session 9.

It was a psychological horror that bored the hell out of many internet talkers yet became an instant cult hit for others like me.

For example, I would have a hard time seeing a character like Christian Bale from The Machinist in any Batman movie.

The pace of those films leaves no way to build psychology so full of detail and nuance.

I don’t mean to say that this type of entertainment is wrong or stupid, don’t get me wrong.

I believe the action genre often devours the other story elements, focusing too much on the challenge of entertainment.

In this case, each character gets the time they deserve, thankfully.

The director handles their lives well, building a puzzle that ultimately has a beautiful, unique solution.

In addition to Bale, I want to mention the two leading ladies, Jennifer Jason Leigh and Aitana Sánchez-Gijón.

The first is a prostitute, a bit stupid and naive, while the second is a mother who seems both sad and happy at the same time.

Both hold the master key to the story’s ultimate secret if you look at the detail behind their scenes closely.

But I don’t want to spoil the plot too much, which would be unfair to you.

The Machinist is a movie I wish everyone would discover, admiring a Christian Bale as you might have seen before.

It will surely be a relaxing break between the blockbusters with superheroes needing to save the world and the universe.

Movies with mountains – When emotions happen at high altitude