Movies with mountains – When emotions happen at high altitude 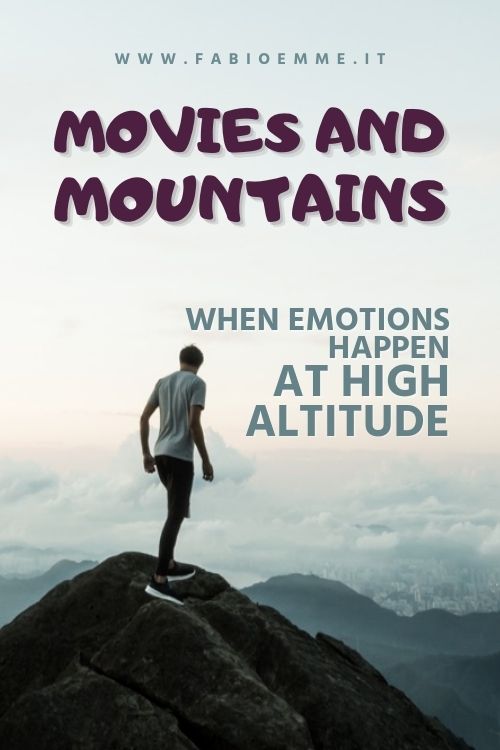 Maybe we can’t all spend a lovely vacation in the mountains due to lack of time and money, but why not watch a good movie about it?

These pebbles across our planet always remind us how small we are in the grand scheme of things.

Think about it; they’ve been there motionless for thousands and thousands of years, watching generations of us pass, live, and die.

Over the geological eras, they have seen entire species take over the earth and then become extinct.

They don’t care that we are tiny humans, giant dinosaurs, or even microscopic insects.

For example, outside my window, I can see in the distance the Alps, born over a hundred million years ago.

What do you want my forty years of age to be to them?

More or less what they are to us, the equivalent of a handful of seconds in our day.

That’s what we are in the long epic of nature, nothing more than a bit of blink of an eye.

However, we sometimes manage to leave a mark in these few moments that we spend on earth.

And since we may not be able to go in person, let’s watch some good movies that tell us about a mountain adventure.

Today I have prepared three very different itineraries trying as always to please all of you.

Let’s start with an excellent romantic movie to warm up against the cold winds at high altitudes.

Then we continue with a lovely American action movie, even if they shot it in the magnificent Italian Dolomites.

Finally, we move to Siberia, where a mysterious horror film in the form of a fake documentary awaits us.

Now that you already know everything, lace up your climbing boots and keep up; there’s always the risk of getting lost.

Today’s first mountain film confronts us adventurously and romantically with the inevitable randomness of fate.

Though they don’t know each other, a man and a woman end up being on the same private plane en route to Denver.

Shortly after takeoff, however, their pilot has a severe illness and dies, leaving the plane unmanned.

Then the plane plummets at high altitude, crashing on top of a mountain.

The man escapes with a few scratches, while the woman suffers a severe leg injury.

They decide to wait for help, as she is unable to walk.

After several days without seeing anyone coming to look for them, they realize that no one knows where they are.

He then builds a makeshift stretcher and decides to drag the woman to safety before they both become too weak to move.

At that point, however, the woman realizes she has reached the limit and can no longer continue.

So he has to decide whether to stay with her and somehow try to resist; it is not known for how long.

Or, he could abandon her and try to cross the mountain, going farther for help.

The difficult decision became more complex as he fell in love with her during their long time together.

Let’s say straight up that the direction and screenplay of this mountain movie are hardly its greatest strengths.

I don’t mean to say that Hany Abu-Assad can’t do his job or that the story and characters are that bad.

These simply don’t make a significant difference, at least in terms of what impressed me the most.

Direction is good without exciting virtuosity or knowing how to make the most of the magnificent natural locations.

The characters and plot are decent, but nothing more, only having an exciting pulpit in the finale.

You’re wondering, I bet, but then why do you recommend this movie instead of a good walk in the mountains at this point?

Well, what elevates everything is the excellent performance of its two leads, practically alone on the scene for 99% of the story.

We all know Kate Winslet well, but the actress has gone far beyond just being known for being the love-struck beauty in Titanic.

After Eternal Sunshine of the Spotless Mind, Carnage, and Steve Jobs, she has now proven always to want to challenge herself and try different roles.

Here her role seems at first to be merely the damsel in distress saved by the knight on duty.

However, as the minutes go by, her character elevates and becomes the sad mirror of her male co-star.

Idris Elba further confirms his rising star, coming into his own in the entertaining The Suicide Squad, already recommended on this site.

The actor does well as a man of few words while giving depth and character to his choices.

The chemistry between the two stars is undeniable, with love growing believably and never overly dramatic or tear-jerking.

In summary, The Mountain Between Us is almost two hours of romance and survival in the mountains, for a movie I enjoyed much more than I expected.

From the distant mountains of Utah, we now move to a film shot in the magnificent Italian Dolomites.

However, the story ideally takes place in the Rocky Mountains, arduous formations straddling the USA and Canada.

The prologue is the classic American-style concentration of action and guilt, already seen but consistently effective.

An experienced climber, during what was supposed to be an easy climb, sees a young recruit die before his eyes.

Years later, the long-suffering hero returns to his friends, finally ready to start over.

Unfortunately, it seems to be bad luck that a federal plane loaded with money is passing over their heads at that very moment.

Some criminals try to rob the flight, almost succeeding.

However, they trigger an accident that crashes the plane and scatters the loot inside some suitcases on the mountain.

At that point, the criminals fake a distress call, but only to then kidnap the hero and one of his friends.

Indeed, their idea is to use their experience as climbers to recover the money and then unceremoniously get rid of them.

But they haven’t reckoned with the steel muscles of these mountain men and their ability to fight and survive.

The hero breaks free and manages to escape, while unfortunately, his friend remains a prisoner of these unscrupulous thugs.

Thus begins a struggle in the relentless climate of those mountains while the movie heads for an inevitable and spectacular final duel at high altitude.

This movie in the mountains underscores just that point, spectacular and fun while having many physically improbable scenes.

Sylvester Stallone, as usual, plays more with muscles than with anything else, not that this role requires the skill of Marlon Brando.

However, the actor shows off an enviable physique and the usual ability in action scenes of escape, fight, and climbing.

Much better, his friend Michael Rooker, a colleague who blames him for the girl’s death at the beginning, with whom he was engaged.

A familiar face that cinephiles have known since the days of Henry: Portrait of a Serial Killer, an incredible metropolitan cult thriller.

Finally, above all reigns the divine John Lithgow, the psychopathic villain of the highest caliber in command of the fierce robbers.

As usual, the actor manages to be funny and scary simultaneously, piercing with his lucid madness anyone who dares to oppose him.

Fantastic the final duel where he is driving a helicopter, facing Stallone with his bare hands, tastefully ridiculous and spectacular at the same time.

At the direction, we have a veteran like Renny Harlin, already the author of the second Die Hard, the only one that I saved along with those of John McTiernan.

Unfortunately, the best remains in those years, after which they lost in insulting productions and films of little value.

Anyway, Cliffhanger is a movie that stands proudly as the rugged mountains where its protagonists climb.

We move to the mountains of faraway Siberia for the last film, but we remain with Renny Harlin directing.

The story starts from an actual unfortunate event, the death of nine hikers in the distant 1950s at Djatlov Pass.

Still unexplained, the legends about it are among the most varied, from aliens to secret experiments of the army.

However, a group of young American students decides to go there and investigate personally.

Wanting to present her research at school, the girl in charge of the project also hires a small crew to document everything.

The beginning is not the best, as the Russian authorities are not eager to help them.

Moreover, some hospital members do not allow them to interview the only protagonists of the investigation of the facts.

However, by a stroke of luck, they meet an old lady who was part of the rescue team at the time.

He explains what he saw, raising suspicions that the government was silent about much of what happened that night.

Once they reach the pass, the group finds a sealed bunker entirely hidden by snow.

At that point, a group of soldiers reach them and start shooting wildly, forcing them to take refuge inside.

What they find in that mysterious research center will go far beyond what they were looking for.

Indeed, in trying to survive, they’ll find something that will twist their idea of the nature of space and time.

As said, Renny Harlin, after a convincing beginning of his career, has definitely gone worse over time.

I’d rather forget having seen some of his trash like Mindhunters or his terrible (not in the right way) prequel to The Exorcist.

But when someone does something well, you also have to give them credit, and this mountain horror movie does its job decently.

Even better is the ending, which I don’t want to spoil, but in conclusion, leaves you satisfied.

Let’s say in the last 40 minutes, the story veers towards pure sci-fi, amazingly without being ridiculous at all.

Maybe there’s a duller middle half-hour, with some not-so-catchy protagonists who recite dialogue that’s a bit drab and bland.

However, even at this stage, the director keeps the helm straight, keeping the right pace and our interest high.

The actors and actresses do not help him much; indeed, I struggle to find one I am interested in talking about further.

Their characters aren’t fascinating, but they can go for being horror fodder in the end.

In short, what stands out in this movie is the immense yet claustrophobic space of the mountain.

It’s a white nothingness made of snow and silence, where the military fiercely protects a secret without even understanding it.

I, therefore, promote this fake documentary that really managed to entertain and amuse me.

Always remaining hopeful that Renny Harlin will return to entertain his audience as he once knew how to do.