The Paper – An incredible office comedy straight from the 90s 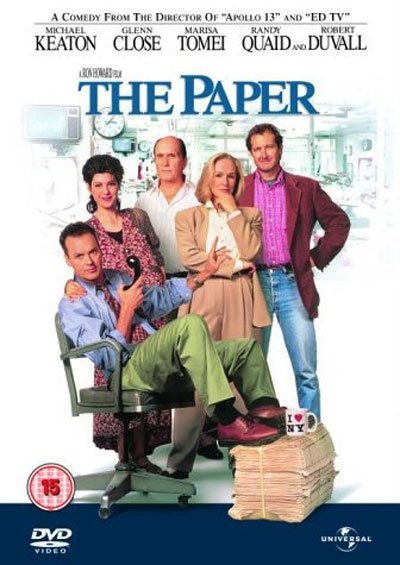 The paper is an entertaining 1994 movie on a long day inside a newspaper office when paper still mattered.

We see various characters’ vicissitudes, but mainly focusing on a journalist who is about to go to work elsewhere.

He hasn’t told any of his colleagues yet, but he will have a job interview in another newsroom in the afternoon.

It would be a significant change for his family, as he would get a bigger salary by working fewer hours each day.

In addition, his wife is pregnant and impatient to stay home, now very close to the day of the baby’s birth.

But the day will be even more challenging than he initially thought, beginning with the brutal murder of two businessmen.

Police find their bodies in a neighborhood known for juvenile delinquency, immediately thinking of a robbery.

However, investigating further, the journalist discovers that the victims were in business with a well-known mob family member.

At that point, an internal struggle arises in the editorial staff to write the article for the next day’s edition.

Indeed, two young black boys were charged with the crime, risking triggering a race riot in the neighborhood.

All of the city’s editorial offices seem convinced of their guilt and come out with strongly accusatory headlines.

But some of his colleagues convinced him that the arrest could only be a move by the police to save appearances.

So begins a race against time to find out the truth about what happened and absolve the kids blamed for the crime.

While fighting for justice, the journalist starts wondering if he wants to give up what he enjoys doing in life.

When paper and movies were important in 1994

Ron Howard is a director I love intermittently, some on and some off, yet whose career I’ve always followed.

While his cinematic craft is never in question, I have sometimes found some of his movies somewhat dull and unnecessary.

Maybe it’s just my problem since they were great successes like Apollo 13, in my opinion, too rhetorical and banal.

Or even the saga of Dan Brown‘s novels, from The Da Vinci Code to the latest 2016 Inferno.

Thrillers with great pacing and full of twists and turns, but honestly I found them rather silly and improbable.

But just as I liked little or nothing of the above, I literally adored his other works such as Frost/Nixon or Rush.

The Paper is another excellent 1994 movie that I would add to the positive list, personally my most favorite of this director.

The incredible pace and world full of fantastic characters remind me of many of Robert Altman‘s best stories.

All the dialogue is brilliant and humorously aggressive, turning this newsroom into a battlefield where words are the weapons.

The protagonists argue about everything from important issues like murder to silly things like air conditioning or an ergonomic chair.

Beyond work issues, each has a believable and intriguing personal and family background behind them.

We see their lives through their affections and not just their careers, understanding that both don’t always work.

Unfortunately, by the end of the day, it’s hard for work-life not to have a radical impact on their private sphere.

Maybe that’s why it’s my favorite film by this director, even though it may not be technically the best ever.

I simply love it because it manages to be over-the-top funny while still staying in a human context that we can all relate to.

The main protagonist is Michael Keaton, one of his generation’s most talented and complete actors.

Proficient in drama and comedy, many of you will surely remember him as Batman in Tim Burton‘s 1989 masterpiece.

In this case, the actor plays a man who is seemingly confident and won’t let anyone tell him what to do.

But faced with a significant crossroads in his life, doubts actually (and his wife) plague him restlessly.

However, this doesn’t stop him from fighting like a tiger for what he believes in, especially against his colleague Glenn Close.

Still a jewel in the crown of cinema’s finest, she is at ease in a role both cynical and ironic.

The actress plays the right-hand man of the newspaper boss, busy making ends meet and always looking for a raise.

But we also eventually see her humanity and the woman behind the steel armor she wears at work.

Always perfect Robert Duvall, star of great class in unforgettable films such as The Godfather and Apocalypse Now.

The actor is the newsroom’s wise father, despite not hesitate to speak up to make it clear who’s in charge.

In contrast, he is a complete mess in life with several failing marriages and a daughter who won’t see him.

Finally, we also mention Marisa Tomei, a pregnant wife unable to sit at home and do nothing.

The actress is always beautiful, joyful, and natural, looking almost as if she is not acting but actually real.

I defy anyone to complain about these actors, the best possible in 1994 making The Paper a great comedy movie.

I recommend it to anyone who likes stories with lots of dialogue and characters and laughs at smart, exciting comedy.