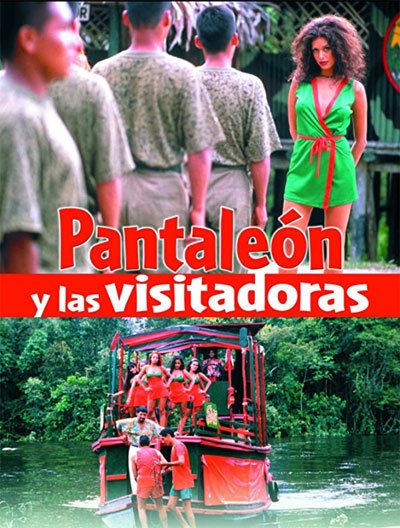 Captain Pantoja and the Special Services mock the military world, with the beautiful Angie Cepeda leading a platoon of prostitutes.

The story begins with an impeccable Peruvian officer whose commanders call back to base for an extraordinary mission.

The upper echelons of the army are worried about the bad mood of the soldiers, especially in the farthest barracks in the jungle.

Therefore, to revive the troops’ spirits, the captain must organize a group of prostitutes that will be rehearsal for a larger nationwide service.

Initially stunned by requests, he nevertheless sets to work efficiently and meticulously by researching and studying the problem.

He recruits an elderly and experienced matron who runs a small brothel in town as his first choice.

The woman introduces him to her girls, from whom he chooses those who will participate in the service.

Among them stands out a mysterious Colombian girl with an almost magical and irresistible charm.

All the men desire, but the other girls fear her, as she has a reputation for bringing bad luck.

After a brief training and transport organization, they begin a boat ride down the river to the most remote military outposts.

In these isolated places, the soldiers haven’t seen a woman in months and are excited about their new visitors.

But the enthusiasm and compliments of superiors disappear when some corrupt and petty men begin to denigrate the service.

In addition, the charm of the beautiful Colombian makes its way into the heart and soul of the incorruptible captain.

They become closer and closer from initial distrust, inevitably ending up in a dangerous secret relationship.

In addition to his career and reputation, the officer will ultimately jeopardize the fate of his marriage as well.

Beauty, love and sex in a camouflage uniform

Many comedies in cinema history take place in the military environment, like Ivan Reitman‘s hilarious 1981 Stripes.

The film had introduced us to a great comedian like Bill Murray, who would later become the Ghostbusters leader with the same director.

Or again, citing one of my favorite directors, I have to mention Robert Altman‘s magnificent MASH.

A ruthless and irresistible comedy about the war in Korea would later become a successful TV series.

In this case, the irony about the stupid and obtuse military bureaucracy combines with romance and a hint of drama.

This comedy brilliantly approaches a complex subject like prostitution, shamelessly describing it as just another profession.

It is not always easy to talk about sex without descending into vulgarity, becoming stupid immature kids.

Personally, before seeing Captain Pantoja and the Special Services, I must admit that I didn’t know Angie Cepeda at all.

The Colombian actress was best known for her roles in telenovelas and a few appearances in a few films.

But she conquers the scene from her first appearance until the end, despite being almost a secondary character.

It’s not just about her beauty, also because there is a lot of competition among the gorgeous girls in this story.

What impressed me the most was her deep sadness, cleverly hidden behind a mask of fierce and bold sensuality.

It’s a hard lesson for us men, at least for those of us who are willing to look in the mirror honestly.

A smile is sometimes the best shield for a woman in a world of malice and envy for their beauty.

The actor is phenomenal in the role of a pimp for the military, always maintaining the serious composure of a mathematical analyst.

Meticulously, the officer analyzes the performance and duration of every sexual intercourse of his girls, trying to optimize their efficiency.

Simply fabulous the scandalized faces of his superiors, when he seriously faces the necessity of having thousands of prostitutes at his service.

However, his impeccable logic must clash with the formal hypocrisy of the army, commanded by old bigots and ignorant male chauvinists.

These men blush with shame, although the captain, in the end, is only following their orders.

His extreme efficiency only makes things worse by highlighting their stupidity.

The army’s rigid mentality and regulations contradict the girls’ sunny beauty and the incredible Peruvian landscapes.

The story’s pace is always right, alternating between comedy and romance with small moments of personal drama.

However, dramas that are never heavy or intrusive, but that the protagonists face with the same lightness and sympathy of their lives.

Captain Pantoja and the Special Services is a movie I always enjoy watching for a carefree laugh.

And yes, I admit, I also watch it to admire the numerous voluptuous and sexy actresses in it, like Angie Cepeda.

However, this sexuality is not coarse or vulgar, and instead, the omnipresent humor makes it feel like an adult fairy tale.

If you haven’t had a chance to see it yet, I highly recommend you rectify that.

You’ll be dealing with one of the best comedies of the late 2000s, little-publicized but not to be forgotten.

The Paper – An incredible office comedy straight from the 90s

The Lodge – A Strange Terror...