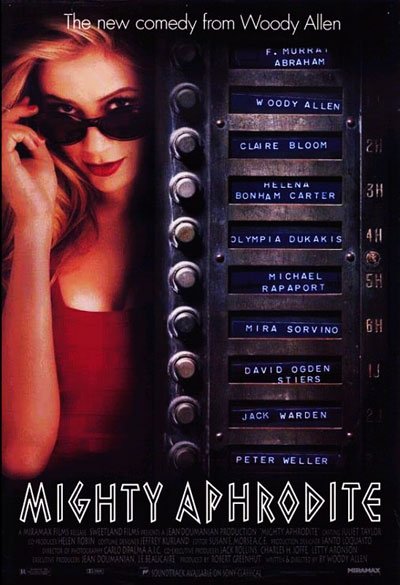 Mighty Aphrodite is one of the funniest films of Woody Allen‘s long career, featuring an outstanding performance by sexy bombshell as Mira Sorvino.

The story is about a married couple in health and happiness, but they feel something is missing in their life.

Indeed, the woman wishes to have a baby but is afraid of losing her job due to an extended pregnancy period.

On the other hand, the husband is not entirely sure that a child would positively change their life.

So she secretly begins the adoption of an unknown girl’s newborn baby without telling her husband.

He initially reacts with irritation when he discovers the deception but immediately falls in love as soon as he sees the adorable baby.

Years later, their son grows up to be a friendly, energetic, and intelligent boy whom all their friends love and envy.

The father is curious to know the biological mother, even though social services can’t legally provide him with her name.

However, he is a journalist, and with his connections and cleverness manages to figure it out anyway.

Without saying anything to his wife, the man arranges a date pretending to be one of her sexual clients.

Despite her questionable profession, he discovers that she is a somewhat unfortunate and naive girl.

Eager to help the birth mother of his child, he decides to do whatever it takes to help her change her life.

He starts by getting her out of her profession and then tries to find her a great guy to build a family.

But fate has very different plans for them, while without him having any idea, even his marriage could be in jeopardy.

Mighty Aphrodite is a hilarious comedy about love, fate, and lies with a simply irresistible Mira Sorvino.

The actress plays a girl who is a bit silly, ignorant and vulgar, but very kind, friendly and affectionate.

This character’s verbal aggression and delicacy create a kind of short-circuit comedy that works spectacularly.

With Woody Allen, the usual lovable little man full of neuroses and fears, the game of misunderstandings becomes immediately irresistible.

An amusing Greek chorus that repeatedly interrupts the story, dramatically analyzing what is happening, is even more hilarious.

These moments are the pinnacle of burlesque, combining modern urban slang with the theatrical language of classic tragedies.

It s a terrific idea that positively breaks the movie’s rhythm, exasperating the comic absurdity of what we’re watching.

As in the old dramas, destiny upset the plans of every character planning for each of them an unimaginable outcome.

What could possibly be more human and wonderful than this?

I love the poetry which permeates this excellent comedy for this very reason.

The irony of life lies in the imponderable mystery that every day and every conversation can hold for us.

You can prepare all you want. Yet you’ll never know what’s around every corner and what will happen to us from one minute to the next.

Just as it can happen to any of us, who assiduously search for love everywhere.

And one day, when happen it stand in front of us when we least expect it, we must recognize it.

Laugh out loud but with thought and feeling

Woody Allen once again returns to New York working on his house specialty: a romantic comedy full of twists and surprises.

The actor and director direct and perform his most outspoken and foul-mouthed movie yet never coming overly vulgar or exaggerated.

This carousel of jokes and double entendres never gets boring and sadly reflects true human nature in uncertainty and hardship.

Despite being full of problems, the characters always react with energy and humor without giving in to discouragement.

Mira Sorvino is the absolute star of Mighty Aphrodite, a sexpot constantly firing hilarious vulgarities like a machine gun.

But as we get to know her closer and better, we also understand her lonely, unfortunate, and hard-luck life.

The actress is exceptionally touching when she talks about her repentance for abandoning her newborn child.

We can obviously associate a desire for motherhood with the protagonist’s wife, the equally strange and funny Helena Bonham Carter.

Besides adopting a child the dissatisfied woman will seek an affair with her boss, the crazy artist Peter Weller.

However, when events turn around for all the main characters, she will find herself in the same spot where she started.

In summary, Mighty Aphrodite is a carousel of characters deceiving each other without ever finding out or suspecting it.

It’s a story I like to see in my hard times to brighten my day.

And although like these characters I can’t see the future, I assure you too will have a satisfied smile before the end.