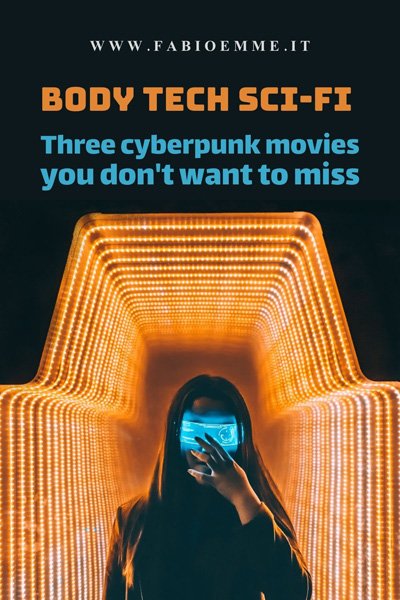 What I love most about cyberpunk movies is how the fragility of the human body mingles with next-generation tech wonders.

Men and robots, microchips and blood, human and artificial intelligence come together and fight each other without peace.

Today, technologies that seem only mirages could soon be part of our daily lives, becoming almost banal.

Let’s look at how the internet has expanded globally, unthinkable even towards the end of the last century.

Unfortunately, what innovation gives us on the one hand inevitably takes away from us on the other.

Still talking about the internet, it has brought the advantage of connecting billions of people worldwide.

But it has also exponentially increased social isolation, causing too many people to live and hide behind social networks.

So, in short, it’s up to us to decide what to do with our technological future.

It will shape our bodies and minds in one way or another, but to what extent?

Not to mention improvements in human capabilities and the creation of real lives and artificial intelligence.

We are still far from being afraid of Skynet as in Terminator, but the progress in this field is undeniable.

Who would like to have someone who decides every detail of our lives for us?

Even if it changes for the better, we all deserve to make mistakes for ourselves, with nobody choosing for us.

We’ll cover all of these topics and more in the next three cyberpunk movies, each in its way.

So decide now whether you want the red pill or the blue pill, and then continue reading at your own risk.

We begin with a cyberpunk gem coming straight from Philip Dick, the brilliant author behind movies like Blade Runner.

We are on a planet that the big corporations have devastated with a long war to possess its precious natural resources.

A group of soldiers still holds out in an outpost, years after the armies of both sides have flown off into space.

One day, however, they receive a peace proposal from the rival faction, also convinced of the futility of that war.

Intent on accepting the deal, they prepare for the long journey when a spaceship crashes near their shelter.

Onboard were selected soldiers from their corporation, only one of whom survived the crash.

The boy convinces them that the wars have moved to other distant systems, and everyone has forgotten about them.

So the soldiers decide to go to the bunker of their old enemies to find a way to leave that cursed planet together finally.

Yet, the journey will be arduous since deadly robots roam the factories and cities in disrepair for decades.

They were the ones who had put them into circulation long ago to battle through the open terrain.

However, these machines, which they had named Screamers, had evolved far beyond their imagination in their underground laboratories.

Now that they are fully autonomous, they indeed kill anyone, regardless of the color of their uniform.

An endless war with no winners

Screamers is a small, low-budget production that creates an exciting cyberpunk war and science fiction movie.

As already mentioned, the basic story comes from a novel by Philip Dick, which is titled Second Variety.

This author was a master at combining the mysterious human body and mind with the cyberpunk sci-fi tech wonders.

Even the leading actor, Peter Weller, is not new to this story and the atmosphere of a decadent future.

Many of you, like me, will remember him as the famous 1987 Robocop, an unforgettable sci-fi action masterpiece.

It was another story about extreme science technology, crafting a cyborg from the meager remains of a dead cop.

However, he plays an old war hero, disillusioned after so many years of war.

Like him, his comrades are tired of fighting for a cause that no one believes in anymore.

Not surprisingly, the best parts are when this soldier tells the young recruit what happened on the planet.

The rest of the cast is not at his level, but they do their part decently in their supporting roles.

Above all, I would blame the cynical and evil Roy Dupuis, a ruthless killer with ambiguous and unpredictable behavior.

Finally, we mention the beautiful but equally tough Jennifer Rubin, in an ambiguous and multi-faceted character.

An ordinary girl who used to be a trader, now only eager to leave that dead planet and start elsewhere.

We have Christian Duguay, a humble film worker who knows his craft well at the helm.

Author of enjoyable movies like Live Wire and the recent teen drama A Bag of Marbles, Screamers remains his top.

The director maximizes the plot, the actors, and the budget at his disposal, making a small cult sci-fi that you will not easily forget.

From a distant planet with few survivors, we move to a research center in a remote forest in Western Europe.

Running this self-contained and well-defended laboratory complex is just one young scientist.

His wife died in a car accident a few years earlier, after which he entirely devoted his time to work.

Indeed, he had been successful after creating a revolutionary artificial intelligence system.

To complete the job, he has to build a robot that can accommodate him in the best possible way.

His AI works by evolutionary steps, starting with an infantile model and then growing to the equivalent of an adolescent intelligence.

The final leap is to get this system to think like an adult inside a cybernetic body capable of replicating the five human senses.

However, because it’s taking longer than expected, the funding company is losing patience.

But what his backers don’t know is that he has a whole other plan for his creation.

Shortly before his wife died, thanks to Archive, he had saved a backup of her personality and memories in a database.

Once he makes a suitable robot, he intends to upload it into his creation to resurrect his wife as an android.

This Archive doesn’t have an unlimited duration, so he has to hurry, especially since the AI he created seems to disagree with being overwritten by another personality.

Will our souls become mere software?

Archive reintroduces some of the classic body tech themes of cyberpunk sci-fi movies romantically and mysteriously.

Through the scientist’s failed experiments, we see the different mental stages of his AI inside two different prototypes.

The first one is a clumsy machine with a child’s mind, while the second one is a more efficient model that behaves like a wayward teenager.

When the new android arrives, the others are jealous because she’s beautiful as a human girl and can feel emotions as touch and taste.

Not to mention then the wife’s mind inside the database, unaware of her situation who believes she is still alive.

As he works on his research, he keeps talking to this digital ghost, trying to reassure her as she realizes something is wrong.

Theo James works well as the main character, despite being nearly alone with two robots in the story’s first half.

Later comes the beautiful and talented Stacy Martin, a perfect android who is sexy and sensitive as a young girl and just as naive.

The great Toby Jones rounds out the supporting cast as the obnoxious and cynical Archive bureaucrat.

A character we don’t initially understand well, only really appreciating him in the beautiful ending.

Rhona Mitra always deserves mention here as the character of a ruthless businesswoman.

Sadly, she would have deserved more space and depth to her role, but she still makes an impeccable impression.

To conclude, applause to the director Gavin Rothery, who convinces his first movie by writing and directing this cyberpunk gem.

Let’s hope he will continue on this path, tackling the mysteries of body and tech in the sci-fi universe in equally original ways.

As the latest cyberpunk movie, we always stay in a perverse body tech love theme.

Elizabeth Harvest is a young girl who marries and moves in with a man much older than her.

For her, it’s a dream come true, as her dreamy voice tells us from the very first moments of the story.

However, in our experience as film lovers, we know how little it takes for a dream to become a dead-end nightmare.

At first, she is captivated by the magnificence of her new home and her husband’s gentle, refined ways.

Everything suddenly changes when he forbids her to enter his underground laboratory, which jealously keeps his secrets.

But of course, the curiosity is too intense, and she ends up giving in to temptation by violating that prohibition.

Inside the lab, she discovers tanks where other Elizabeths lie in a state of cryostasis, waiting to awaken.

At that point, she realizes that she is not the first one who has played the role of the newlywed.

Her husband doesn’t take her betrayal too well and brutally kills her, waking up another clone as his new wife.

In an endless cycle of love and death, one of many Elizabeths will have to figure out what’s going on.

But maybe the truth she’ll find won’t be the one she’s been looking for, paying a heavy price for her freedom.

I love you as much just to murder you

Elizabeth Harvest is a film that I initially naively believed to be one of the many romantic dramas, but it pleasantly surprised me.

The starting point is the old Bluebeard fairy tale, where the husband forbids his wife to go into a particular room in the castle.

When she inevitably enters, she discovers the corpses of the man’s previous wives, all victims of the same irresistible curiosity.

This moral comes in a cyberpunk style, with his wife’s body continually resurrecting through bio tech experiments.

However, this remains just the first quarter-hour of the film for those afraid of spoilers.

The rest is a good evolution of characters and change of roles between the various characters, among which it is not always easy to understand who is the prisoner and the jailer.

Above all, we emphasize the outstanding performance of Ciarán Hinds, an actor usually secondary that here finally has a leading role.

He plays a complex man to understand, intelligent and sensitive but just as ruthless and unstoppable in achieving his goals.

The young and beautiful Abbey Lee is by his side, the very face of hopeful innocence that violence brutally silences.

Finally, halfway between the two protagonists is the eternally handsome and talented Carla Gugino, assistant and lover of the mad and brilliant scientist.

Her character will be the balancing point between wife and husband, besides introducing us to the dramatic background of the whole story within her diary.

Sebastian Gutierrez writes and directs this atypical romance with cyberpunk influences, tension, and well-distributed twists and turns in the story.

A terrible modern fable that tells us a psychopathic body tech love story with thriller tones, holding the suspense until the last minute with superb craftsmanship.