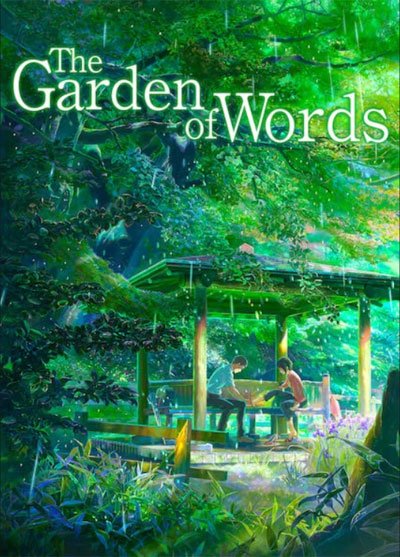 It was 2013 when Makoto Shinkai adapted another of his manga into a movie, bringing The Garden of Words to theaters.

This is another story where the Japanese director spoke of his most cherished themes, such as love and youthful incomprehension.

The protagonist is a young man still at the beginning of his life, going through a difficult family moment.

His parents have separated, and he lives with his brother, who would like to move in with his girlfriend.

One day a violent downpour comes and surprises him as he takes the train for his usual school trip.

He finds shelter from the rain in a lovely garden with a gazebo in a large city park.

There he finds a girl older than him, comically intent on drinking beer and eating chocolate.

After a silent moment of embarrassment, they make friends and begin to meet often in that place, but only on rainy days.

The boy confesses to her his dreams and hopes, such as becoming a skilled shoe designer.

She does not reveal much about herself but listens with interest and amiably converses in an increasingly intimate way.

Once the summer is over, school starts again, and it is only then that the boy will discover the true identity of his new friend.

And when he hears her sad story, he’ll also realize that there’s more than just friendship between them.

At that point, he must have the courage and declare despite their age difference, accepting whatever her response will be.

The little wickednesses of ordinary people

Like the main characters in this story, we are all surrounded by familiar faces that we know well every day.

Often life flows quietly and peacefully, without conflict or having problems with anyone.

However, a small mistake or misunderstanding is enough to trigger a chain reaction from which there is no turning back.

If we are lucky in those difficult moments, our friends and relatives remain close to us, facing with us the waves of that stormy sea.

In these circumstances also comes the nature of some people hiding an unexpected evil behind a mask of false kindness.

This is what happens to the girl we meet in this garden with the protagonist.

A simple misunderstanding turns her private and professional life upside down forever, isolating her from everything and everyone.

In this case, the malignant nature of despicable girls comes to light, spreading horrible lies about her.

Once they trigger the gossip bomb out of spite, there arises a great contempt for this shy and lonely girl.

But as can happen in real life, a simple friendship can be just what we need to save us at the edge of the abyss.

If eventually, this friendship evolves into love, besides salvation, maybe we can also find our way to happiness.

The Garden of Words is a small masterpiece, just like the manga that inspires it.

It is a gem of romantic animation narrating with great delicacy, irony, and romanticism a personal yet universal drama.

A luminous journey through modern romance

Makoto Shinkai is an auteur who has been building an excellent filmography of animation movies for kids and adults over the past 15 years.

Developing his style and pursuing his themes, he has also gained great appreciation from the audience.

These stories have the gentle touch of old-fashioned fairy tales, yet within our modern internet and social networks reality.

I had spoken enthusiastically about him before, for example, recommending the wonderful Your Name from 2016.

Other authors don’t handle the romance genre so well, pushing too hard on the intense moments to push us to tears at any cost.

On the other hand, Shinkai wisely alternates between the love parts and the comedy, inserting the drama spontaneously and realistically.

The Japanese director and designer have perfected his recipe, continuously mixing each ingredient properly.

Even the film’s style is distinctive, indistinguishably blending hand drawings with computer animation in the most complex scenes.

This world is similar to ours, but a distinct aura of color and light gives it an almost fantasy-like atmosphere.

Finally, I want to make a small mention of Kashiwa Daisuke’s beautiful music, which accompanies us without ever being annoying or intrusive.

As a small addition, in the video above, I have included the lovely Rain sung by Motohiro Hata, a cover that concludes this story beautifully.

In a word, The Garden of Words is a simply adorable and unforgettable manga movie.

A unique love story that, I assure you, you will often see again in your dreams after seeing it on your screens.