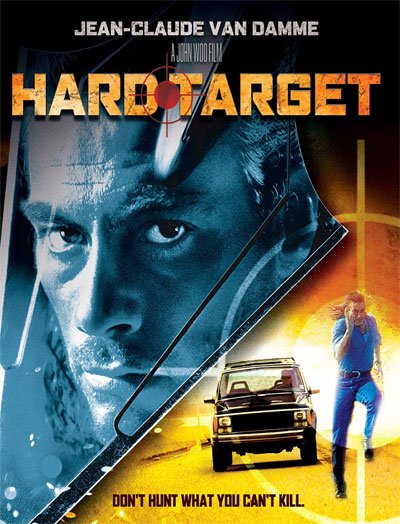 Hard Target is a crazy 1993 action movie, through which Jean Claude Van Damme succeeds in bringing the mighty John Woo to Hollywood.

The story is as simple as effective: bored rich people enjoy hunting and killing homeless people.

A group of ruthless mercenaries organizes these manhunts, looking for targets that might provide an exciting challenge.

The authorities do not seem interested in pursuing this series of deaths, with no leads to follow.

Besides, they were all poor men with no ties to the world, which no one ever reports missing.

In addition, a police strike has been going on in the city for some time, remaining few officers on duty.

The poorest neighborhoods slip into total anarchy, becoming the ideal hunting ground for this game.

However, the daughter of one of the game victims asks too many questions, raising some suspicions.

In addition, she hires a jobless sailor to assist her in the investigation for protection against these criminals.

Discovering the trail of that macabre game, they soon come up against the mercenaries and their wealthy clients.

In order to shut them up for good, they decide to organize one last hunt, removing any inconvenient witnesses.

But the hound she has hired will prove extremely resourceful, fighting on equal footing with the hunters.

They arrive at an old factory outside of town, fleeing for their lives with bullets whizzing by their ears.

They will come face to face in a war with no rules for the final confrontation in that remote place.

And alone in the middle of nowhere, even the rich will discover maybe hunting someone for sport isn’t fun.

If you happen to live on the moon and have never seen anything by John Woo, this is a perfect way to start.

His directing style is impeccable, leaving no detail even in the most absurd action scenes.

When I say absurd, I don’t mean it by accident because upon entering this world, and you need to know what you’re in for.

In Woo’s cinema, the rules of physics bend to the spectacle we admire, and we don’t care.

Because for us, it’s impossible to watch and not love these incredible stunts, fights, and two-handed gunfights.

And of course, don’t forget the iconic doves flying in slow motion that are the director’s trademark.

The social codes come down to the plot and character exigencies, becoming just about a modern western in a lawless land.

However, please don’t think this is a stupid movie for a minute because every dialogue and scene is dense with meaning.

The social metaphor of the rich killing the poor for fun is self-evident; I don’t think it needs explanation.

Just as evident is the helplessness of the workers at the docks, whom employers hire and fire on the same day as spare parts.

Fascinating are the characters of the mercenaries, who at first may seem like classic one-dimensional psychopaths.

In reality, as mentioned, listening to the dialogues and seeing how they talk to their clients, something else emerges.

Despite earning a lot of money, they hate wealthy hunters almost as much as the bums they hunt.

I mean, you have to see this film more than once to understand it, initially blown away by its explosive action.

For the first American production of the brilliant Chinese director, Jean-Claude Van Damme gets the lead role.

In a movie like Hard Target, the martial artist famous for his splits and flying kicks don’t disappoint his fans.

Better yet, this movie features some of the best outstanding fight choreography he has ever put himself through.

I will say more, in this movie, there are the funniest action scenes I have ever seen with the famous Belgian actor.

Of course, you need a villain to match for every hero, and Lance Henriksen delivers another one of his fantastic performances.

His wickedly wise face as the hunters’ leader embodies all the evilness of humanity mercilessly in his fantastic icy eyes.

Equally good is Arnold Vosloo as his most loyal soldier and an expert hunter who will soon hate Van Damme.

Finally, Yancy Butler is the beautiful damsel in distress looking for her father, triggering all this big mess.

Her character is perhaps the weakest of the bunch and not very interesting, but then you can’t always have it all.

Later, he will direct other excellent action films such as Mission: Impossible II or Face/Off before returning to China.

Indeed, disappointed by the choices of the big film majors, the director returned to his motherland, picking up where he left off.

Hard Target is one of the funniest entertainment movies of the 1990s and one of the best in Van Damme’s career.

This film reminds us to keep our eyes open and never underestimate the work of Eastern filmmakers.

Because even though international distribution often misleads them, much of the inventiveness of modern Western cinema comes from them.