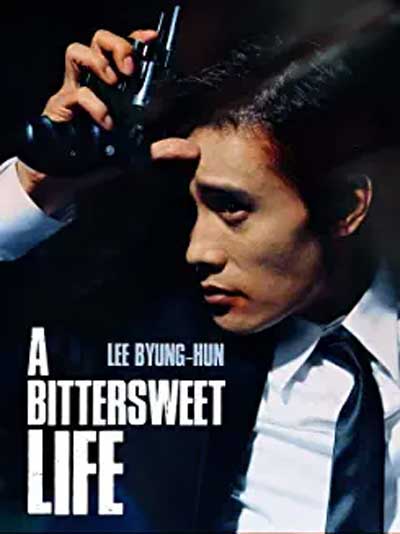 A Bittersweet Life is a 2005 action drama from faraway Korea, where excellent, unknown movies keep coming out every year.

The main character is a violent and cold thug, the right-hand man of a powerful crime boss.

As elegant as he is ruthless, the man carries out any order of his leader without any hesitation.

Officially the manager of a luxurious hotel, he is actually a soldier protecting the business of his gang.

They have numerous rivals who try to steal their trafficking in gambling and prostitution in the city.

One day the boss has to leave for a few days and asks him to watch his young lover.

He only knows about his secret relationship with this girl, a young and beautiful musician.

Initially befriending her, he soon discovers that she is cheating on the boss with another guy.

His orders are extremely clear about a betrayal: he should immediately kill both of them without mercy.

However, he feels pity for the girl and decides to spare her life at the last moment.

Then the boss decides to take revenge on him, ordering his own gang to beat and kill him savagely.

Miraculously he makes it out of the ambush alive and frees himself from his captors, escaping to hide in the city.

Let down by his lifelong employer, he starts a war that he knows he can never win.

The bittersweet love of criminals

A Bittersweet Life reminds us again of the unique way of making movies in the East, a world that the West snubs as it did with this movie in 2005.

The story offers an incredible blend of different sensations, perfectly mixing in this little piece of art.

Plot and characters have the unique old noir mood, where the evil was as elegant as the beautiful suits of these criminals.

This mood updates to modern times by bringing the protagonists to the shiny and colorful high-rise buildings of the great Seoul.

The moments of introspection of these characters are touching and alternate between sudden bursts of violence with phenomenal action scenes.

After all calms down, returning to the loneliness of the protagonist in his complete isolation from the rest of humanity.

This cold and lonely man comes alive only to obey his boss and the brief moment of humanity he has towards this girl.

Otherwise, his demeanor and eyes are always ice cold, fighting breathlessly to the death against every enemy.

Finally, when everything he has dedicated his life to suddenly collapses, the man begins furious and suicidal revenge.

It’s a kind of story we never see in Western cinema, which tends to divide the good guys and the bad guys too quickly.

In this film, however, good guys and bad guys do not exist, leaving room instead for a multitude of ambiguous characters.

An author of versatile and exquisite talent

Lee Byung-Hun is an outstanding leader, despite having almost only one facial expression throughout the film.

This ruthless enforcer only comes alive later when he discovers that his total dedication to the boss has been for naught.

The actor is equally good in the many action scenes, where his skill makes the fights look like an elegant ballet.

Yeong-cheol Kim is equally remarkable in the role of the gang leader.

A man who never allows anyone to contradict him, claiming to be right even though he knows he is wrong.

As he personally admits, he could forgive the protagonist but doesn’t want to because he is the boss and decides whatever it takes.

Above everything stands the immense talent of a director who has become a warranty of quality and entertainment.

Jee-woon Kim continues to elevate his style, having made two transcendent horrors like I Saw the Devil and Two Sisters.

Most famously, he also directed Arnold Schwarzenegger‘s comeback after his political career with the hilariously funny The Last Stand.

Although he directed numerous movies after 2005, A Bittersweet Life is my absolute favorite by this auteur.

This film has engaging pathos, wonderfully unbalanced and aesthetically impeccable, full of action, surprises, and feelings.

Despite its success in South Korea, the rest of the world’s distribution has almost completely ignored it.

Personally, I think it’s one of the finest noir/action films I’ve seen in the last 20 years, if not the best ever.

Knowing full well that I’m making a powerful statement and I assure you that’s not an exaggeration.

I recommend it to anyone wanting to approach oriental cinema for the first time with a plot of undefined genres.

For you, this could be the beginning of a beautiful journey into an unfamiliar world of stories you’ve never experienced.