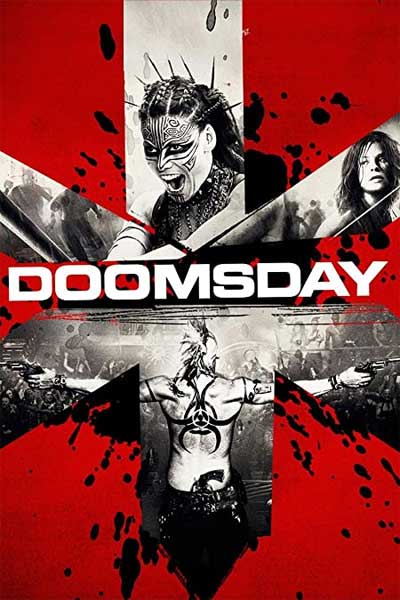 Doomsday is an excellent 2008 action movie about a dystopian future where a health apocalypse sweeps across the planet.

It all begins with a highly infectious virus sweeping Scotland and threatening to spread throughout Britain.

When doctors can no longer contain the plague, the entire region is shut down and put under indefinite quarantine.

When the government orders people to remain hopelessly in their homes, the population reacts violently against the soldiers.

Before finally closing the border wall, the fleeing army mercilessly exterminates the rioters who try to cross.

Years after this scandalous bureaucratic abuse, however, the infections started again.

The political authorities decide to isolate London, where the disease is now killing thousands of people.

Finally, a small group of soldiers is sent on a secret mission to old Scotland to find a cure.

On the other side of the border, indeed, many people seem to be around again immune to the virus.

During all this time, the situation on the other side of the wall has escalated into a family feud.

The population lives in castles again, returning to an almost medieval situation.

In addition, a bloodthirsty madman commands an army of cannibalistic thugs, assaulting anyone they encounter around.

Leading this army team is a female soldier who had miraculously escaped from quarantine in her youth.

Their mission is to find an old scientist, who disappeared years ago, and now is their last hope for a cure.

But of course, nothing is as it seems, and once they cross the border wall, they will have to fight for their lives every minute.

How many things to see in the apocalypse England!

Doomsday is a wild action movie with a tragically prophetic story about the health pandemic back in 2008.

Indeed, we’ve all seen how people react violently when in a panic.

Likewise, we have seen the government react dully and stupidly by further dividing the population.

Among the many films about pandemics of all kinds, it stands out for its unabashed action-horror soul.

Despite being dark and pessimistic, the pace flows away like a river in flood, offering great spectacular entertainment.

The diversity of scenarios and situations it offers is another strong point, and it is perfectly blended together.

Starting with an almost documentary look at the army’s acts on the inhabitants during the riots, it quickly becomes something else.

From the Scottish wastelands, we come to modern London, where the police brutally oppress citizens there as well.

After that, we return to the classic post-apocalyptic Mad Max-style, finally arriving at almost an old movie of swords and medieval knights.

In short, Doomsday is a film that I immensely enjoyed in 2008, being multi-faceted and entertaining with intelligence and irony.

His skill always focuses on the characters and the story, overwhelming it with a cascade of action scenes.

However, the director entertains his audience using great cinematic craft without being silly or trite.

You can see the criticism of the greedy and ruthless world of politics and the policemen used as guard dogs against the population.

The protagonist Rhona Mitra emerges for her incredible beauty, combined with an outstanding physical performance in the many action scenes.

Her character is a soldier who no longer has ties with the world, sent on an impossible mission by a government she hates.

Indeed, even if she finds the cure, the politicians only intend to exploit her for maximum political advantage.

By his side, wise old Bob Hoskins is an ex-cop who would actually intend to help people.

But unfortunately, he can do very little, having first to juggle with his superiors’ daily infamy and lies.

Finally, the superb Malcolm McDowell always has the right face to play the villain of the day.

However, his hatred is not toward the people but against the nation that forsook everyone to die alone without hope.

Doomsday is a movie that didn’t earn much in theaters in 2008, though it largely recouped the production budget.

Numbers aside, it remains an essential piece and one of the most brilliant and original action movies in Marshall’s filmography.

I would therefore recommend seeing it to anyone looking for something new in the post-apocalyptic genre.

Maybe it will have characters and a story already seen, but it still manages to be innovative thanks to its ideas and impeccable direction.

Darkness – A haunted house in...