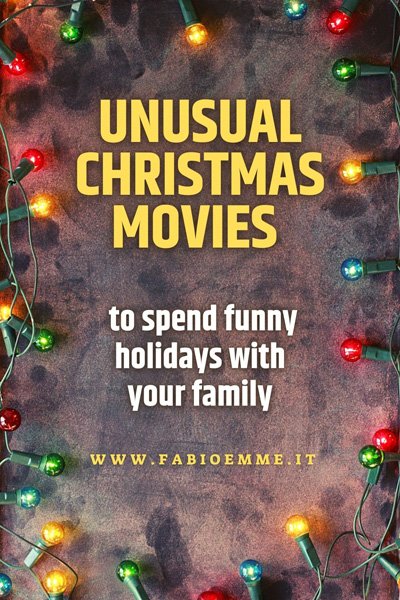 And here we are again close to Christmas, that unusual time of year where everything slows down, giving us time to watch some funny movies together with the family.

There is no shortage of opportunities, including dinners, vigils, and evenings with friends at every turn.

These are all complex tests to our eating endurance that will curve the horizon of our (ideally) perfect abs.

As usual, we’ll start our diet next year, even if we want to, there’s no more time. What a bummer.

Of course, let’s admit it when we are full belly, almost all of us sit on the couch doing some zapping on television.

Kind of like our grandparents once did, telling stories around the fireplace instead of watching them on a 4k screen.

While we’re at it, why don’t we put on a slightly unusual movie to spend a funny Christmas with the whole family?

Of course, making everyone happy is not easy, but this is where your humble friend tries to come to your aid.

It wasn’t easy to find the right blend and combination of ingredients, but that’s my job after all.

So, let’s try not to think about the calories we rack up with our dinners.

Instead, we try to enjoy the company of our loved ones, always the most important meal at the table.

Our cinematic buffet opens with a story that incidentally is not set on Christmas at all.

The beginning of this movie is also ruthless, with some families living in the middle of a construction site.

Some punks are constantly nagging them, trying to convince them to sell so they can finally build a high-rise complex.

Their property is the only obstacle to completing the project, headed by a tyrannical businessman.

All left in the building now is an elderly couple running a diner, a silent ex-boxer, a pregnant girl, and an unsuccessful painter.

The group is now on the verge of giving up, as even the police have no intention of helping them.

It seems like the end when they all suffer another attack by vandals who tear apart all their belongings.

The following day, however, they miraculously find all their precious possessions repaired and in better condition than before.

Some objects are missing from their apartments, leaving a trail leading up to the terrace.

There they all discover they have new, unexpected neighbors, two small flying saucers that seem to be living and thinking.

These aliens are great at restoring anything damaged, rebuilding it perfectly.

But at the same time, they steal some of their belongings and electricity, building a kind of safe nest.

Indeed, the alien lady is expecting, churning out three cheerful tiny robots that also start fluttering all over the place.

But the contractor and his henchmen haven’t given up at all, worried that time is running out for their construction site.

So to permanently evict these people, they even plan to set fire to the entire building.

While not strictly a Christmas movie, this is a funny family comedy that will entertain you in an unusual fashion.

The romantic atmosphere of cheerfulness and lightness is typical of Disney movies with little science fiction.

It’s no coincidence that the wise Steven Spielberg is in charge of the production, and he knows very well which buttons to push to trigger the right emotions.

Among the protagonists, we have two actors of the caliber of Hume Cronyn and Jessica Tandy.

These two old-timers give all the rest of the characters, otherwise the usual stereotypes and racially heterogeneous variants of outsiders.

Especially the actress gives an excellent performance of this lovely grandmother, forgetful and irritating but also moving and emotional.

Like any Spielberg production, the special effects are always top-notch and extremely impressive to this day.

The tiny aliens will delight your children, still animated using the dear old stop-motion of that era.

An art now decayed except for a few rare films by exceptional authors searching for specific artistic emotions.

Among all my favorite stop-motion is the excellent Nightmare Before Christmas by Tim Burton, another fantastic movie for the holidays.

Batteries Not Included is suitable for almost everyone, romantic and hilarious with some dramatic tips well thought out.

In a word, the classic Christmas movie entertains the whole family with a story of extraterrestrials traditional but unusual at the same time.

We now turn to a decidedly more adult story, but comical enough to be enjoyable even for children.

A robber is burglarizing a wealthy cottage in the affluent American suburbs on Christmas night.

Unfortunately, he sets off the alarms, and a guard dog attacks him, biting him in the leg.

The police arrive on the scene immediately, while his partner in the car abandons him and flees.

Injured and with no idea where to go, the thief climbs into the first car he finds, taking a married couple hostage.

The two were returning from an unsatisfactory marriage psychotherapy session and are still highly irritated with each other.

However, they temporarily establish a truce, albeit at gunpoint,

They then take the stranger to their home, where they expect the entire family to arrive for Christmas dinner within a few hours.

A strange friendship develops between them and the thief, while the police search everywhere, knocking door to door to find him.

Their only son comes home just in time to join the party to complete the family picture.

Initially fearful of the armed thug, husband and wife confess to things never said before.

Indeed, without even meaning to, this rogue will turn out to be the best therapist they could find.

Taking all escape from them, he’ll finally confront them with the problems they’ve ignored for so long.

When the rest of the family arrives for dinner, the situation escalates explosively and irreversibly.

At Christmas everyone is better, especially with a gun on them

Now don’t let the criminal atmosphere of this story scare you away; we’re still talking about a comedy.

Indeed I would venture to say that it is a brilliant and in its way romantic comedy, with an incredible pace from start to finish.

The arguments between husband and wife are some of the hilarious dialogue I’ve ever seen.

Ironically and wickedly, they throw in the little family lies we all tell at one time or another.

It’s no coincidence that we have two exceptional leads with machine-gun-like speech and scalpel-sharp humor.

Kevin Spacey is as cynical and ironic as ever and the equally fierce wife who is anything but helpless Judy Davis.

The equally entertaining Denis Leary is between the two to keep them in check.

He’s initially a kidnapper but quickly ends up acting as an impartial judge over their marriage.

In short, a unique and extraordinary comedy, directed by the then-rising star of cinema Ted Demme.

Grandson of the famous Jonathan Demme, author of masterpieces such as Philadelphia and The Silence of the Lambs, also seemed to become a great director.

Sadly, the director died while still young of a heart attack after directing international hits such as the famous Blow with Johnny Depp.

So let’s enjoy what’s left of him, this beautiful Christmas movie that is unusual, funny, intelligent, and perfect for the whole family.

As a final Christmas tip, let’s talk about an unusual masterpiece of family funny movies for me.

The story begins with a brother and sister arguing in front of the television, foolishly doing damage.

At that point, they call for assistance, who sends a very particular electrician to their home.

Thanks to a magic remote control, this older man sends the two kids to a small town in the distant 1950s.

Moreover, the place where they end up is not even real, but instead, it is the famous Pleasantville, the location of the television sitcom of the same name.

The brother is thrilled with the novelty, seeing every episode and knowing every place and person in that fiction.

On the other hand, the girl finds their new black and white reality strange and disturbing.

They both soon discover that only men and women conformed to the system of life in that seemingly happy community.

No longer able to live by those rules, they begin to disrupt the city with their free-thinking.

At that point, art and sex invade everyone’s life, upsetting the common and hypocritical sense of decency.

For the first time, the boys and girls of that place discover what passion really is and later, unfortunately, also hatred and fear.

However, in the end, even risking it, it will be worth it to face the dangerous repression of bigots.

It is always right to face oppression with joy, finally bringing color into that world of false smiles and feelings.

Is it better to look or be truly happy?

Pleasantville is one of the best fantasy comedies I’ve ever seen, delicately handling several complex topics.

Let’s say right off the bat that we’ve already seen the parable of the world of fiction and the actual world meeting.

We can cite Woody Allen‘s The Purple Rose of Cairo‘s protagonist, arriving in the real world from a movie screen.

Or even more absurd was Last Action Hero, where Arnold Schwarzenegger ironized on his role of the eternal superhero by entering the life of an ordinary kid.

In this case, however, director Gary Ross explores the transition from adolescence to adulthood, dealing with the harsh conformity of an intolerant society.

The fictional characters in this town only gain awareness when they meet two real people like the two main characters.

Along with emotions come colors; as a shy bartender, Jeff Daniels gets into art and painting.

But with change comes racism, always around the corner waiting to punish people of color.

Color that this time is understood in the true broadest sense of the word and not limited to African Americans, although the parallel is obvious.

Terrific protagonists, including Tobey Maguire, would soon become the first (and still the best) Spiderman film.

I thought she was just one of the many blondes in Hollywood, but then she made me change my mind with masterful performances as in Walk the Line.

In short, Pleasantville is a funny Christmas movie to understand, talking about society, family, and change in an unusual and original way.

The Hunt – Better be strong...