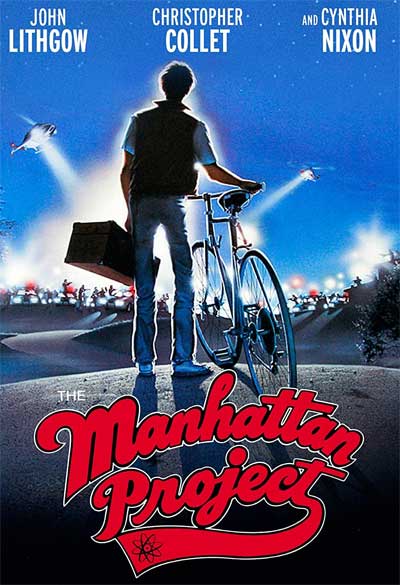 The Manhattan Project is a 1986 movie that ironically features a teenage adventure about making the Atom Bomb.

The story begins with a scientist moving to a small American town, where his company has just opened a laboratory.

Indeed, with his research, they can now make a much more effective and productive liquid plutonium.

His invention would be helpful in future nuclear power plants, but obviously, the military is also very interested.

As soon as he arrives in town, he contacts an agency to find a new home.

Fascinated by the woman who works there, he flirts with her by asking her out.

This woman’s son is a bright young man passionate about science and building things.

So to befriend him, he invites him to visit the lab showing him his advanced equipment.

However, the boy quickly realizes what they are really doing there.

So, together with a friend of his, they decide to write a newspaper article about this secret research.

One night, they very cleverly sneak into the facility and steal a sample of this liquid plutonium.

They then decide to make a real Atom Bomb and present it as a provocation at a youth science competition.

Unfortunately, it doesn’t take long before the lab notices the theft, putting the police and military on their trail.

When the authorities report him as a terrorist, the boy has no choice but to threaten to use the bomb.

Only the scientist realizes that he is actually a good guy in a desperate situation.

So he tries to mediate with his superiors, hoping to save his life before it’s too late.

Never annoy whoever keeps finger on the big red button

This 1986 movie is quite distant from the actual 40’s Manhattan Project that led to the first Atom Bombs.

However, our concern remains unchanged, especially after witnessing the tremendous devastation of which these weapons are capable.

We fear and admire these scientists, whose genius is unquestionable.

But the work, undeniably, has brought so much terror and suffering to the world.

The young protagonist in this story faces the same ethical dilemma.

He condemns this project near his home but is intrigued by the challenge of creating a nuclear weapon.

When you think about this, it’s kind of sad that this kind of technology always has to come about for a warlike purpose.

Perhaps if we used them in the right way, they could be good for society in so many different ways.

Of course, it is difficult to reason with radiation contamination since even the slightest mistake has devastating consequences.

However, this movie is not dark and pessimistic, indeed in large part, it is an adventurous comedy for teenagers.

There is always a light and funny atmosphere, typical of children’s films of that era.

However, it turns into a thriller when, at the end, the atomic bomb seems to explode at any moment.

The dialogues are always ironic about the nuclear standoff with other nations, such as the famous Cold War with Russia.

Each nation continues such projects because they are afraid of their rivals, in a growing tension that we hope will never result in a real war.

Yet looking at some idiots that sometimes rise to leadership, we wonder what would happen with the wrong person in front of the big red button.

An entertaining and underrated 80’s adventure

Marshall Brickman has not directed many films in his career; instead, we may remember him more as a writer and producer.

Indeed, he worked on the great Woody Allen‘s beginnings for Annie Hall, Sleeper, and Manhattan in prior years.

However, his directorial work is commendable, especially in the editing that gives the story a rhythm that never gives way until the finale.

The Manhattan Project is a low-budget 1986 production, but it’s still a movie boasting a respectable cast.

On top of all, we have, of course, John Lithgow, here as the good and reasonable face of science.

This actor is a favorite of mine, starring in some of Brian De Palma’s masterpieces and fun generational cult movies like Footloose.

I also like to remember him as one of the most fearsome enemies in Dexter’s famous TV series, where he played the psychopathic Trinity killer.

Christopher Collet instead plays the young genius boy who makes the bomb, an 80’s student with a friendly and kind face.

Despite showing good potential, the actor will not go much further in his film career, only in television series.

A fate that will follow the other leading actress, Cynthia Nixon, a young and beautiful girl determined to reveal to everyone the dirty secrets of the military.

In fact, after a short time, she will become the famous Miranda of Sex and the City, a tough lawyer who has an ambiguous and conflicting relationship with men.

In conclusion, I recommend to everyone this 80’s movie where the focus was more on an exciting plot than on action or special effects.

The Manhattan Project takes a lot from the spirit of the years, close to the atom bomb arguments of the beautiful WarGames by John Badham.