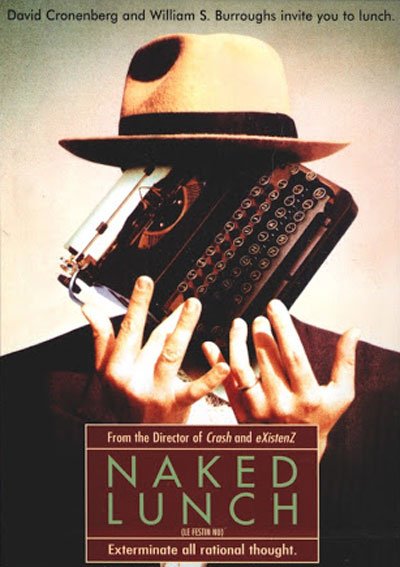 Many people didn’t believe it was possible to turn the most famous book by William Burroughs, Naked Lunch, into a movie.

Yet in 1991, David Cronenberg accepted the challenge, bringing the strange sci-fi and drug epic of the crazy American writer to the cinema.

The protagonist is a writer who, in order to earn some money, humbly works as an insect exterminator.

However, his habit of using a wide variety of drugs becomes intolerable, especially when he begins to take the powder he uses in his job.

Very soon, his wife becomes an addict as well, dying when he shoots her during a stupid game.

The man manages to escape from the police, meeting a monstrous being who offers him to help the government as a spy in the area of the big drug producers.

Therefore, he leaves the city where everyone looks for him and blames him for this murder, knowing his madness.

So he goes far away, to this lawless area where the most dangerous criminals and madmen find refuge.

Every day, he compiles reports about the people he meets and their various activities, using a living typewriter resembling a giant cockroach.

Thus, he discovers some mysterious drug dealers have started selling a new black powder, which quickly conquers the market.

Therefore, his superiors ask him to investigate how and where this unknown organization produces this powerful drug.

The poor writer, increasingly the victim of his hallucinations, begins to distinguish reality from fantasy no longer.

In his delirium, he begins suspecting he is a pawn in someone else’s game to a purpose he doesn’t understand.

An unconventional story between madness and fiction

Naked Lunch is a movie that succeeds in a simple way to bring order into William Burroughs‘ psychedelic narrative incoherence.

The story constantly moves between the plane of reality and the imagination where the protagonist takes refuge.

This man is the autobiographical mirror of the writer, far from trying to elicit pity or compassion for his condition.

Burroughs, indeed, had also worked as an insect exterminator, although his wealthy family never denied their financial support.

Despite the schizophrenia of the various scenes, the plot unfolds straightforwardly without any difficulty or dull moment.

On the contrary, the movie has a magnificent old noir atmosphere, almost as if it were a crazy version of Casablanca.

At least that’s how I want to see this city and the Interzone it tells about in this story.

A place where everything comes and goes quickly, full of characters both lovable and hateful at the same time.

Like many other crime stories, there’s betrayal, double-crosses, inextricable conspiracies, and twists around every corner.

The main character has no intention of ever quitting drugs, living his addiction as a continuous inspiration to write.

A lifestyle that still reminds us of Burroughs, who, despite the immoderate use of drugs of all kinds, still lived beyond 80 years.

Fortunately, he did not die prematurely like other young artists whose lives were stormy and unpredictable.

On the contrary, he bequeathed us his unique vision of the world and humankind with his long and prolific career.

An inimitable director serving a masterpiece out of the box

We can say what we want about David Cronenberg, except he’s a predictable and trite auteur.

The great Canadian director tries with each of his movies a different style and genre of filmmaking.

However, we recognize his hand whatever story he narrates, from the shocking 80’s Videodrome to the recent amazing Cosmopolis.

His central protagonist is the extraordinary Peter Weller, famous as the first Robocop in cinema history.

The actor fits perfectly into the role of the writer blessed by talent and cursed by addiction.

His performance is ironic and suffering, moving like a stoned Humphrey Bogart in a sci-fi noir world of crazy hallucinations.

The adult and sensual Judy Davis is always behind him, playing a woman with as many problems as the protagonist.

Basically, she’s the shadow of the love he killed and still runs away to find, as another writer’s wife, in the trafficking zone.

The cast of these traffickers includes several remarkable actors, such as Ian Holm, Julian Sands, and Roy Scheider.

All of them deceive and exploit the writer without his knowledge, though respecting and admiring his talent.

Naked Lunch is a unique and unsettling work, a movie that will leave you stunned, just like William Burroughs.

Precisely like the novels of this writer, it works perfectly even 30 years after its release.

The significance will remain forever, even for those who will admire these works again in another 50 years.

Because true art masterpieces don’t need to be trendy, rather they crystallize over time and become immortal.

The Gentlemen – War And Conspiracy...