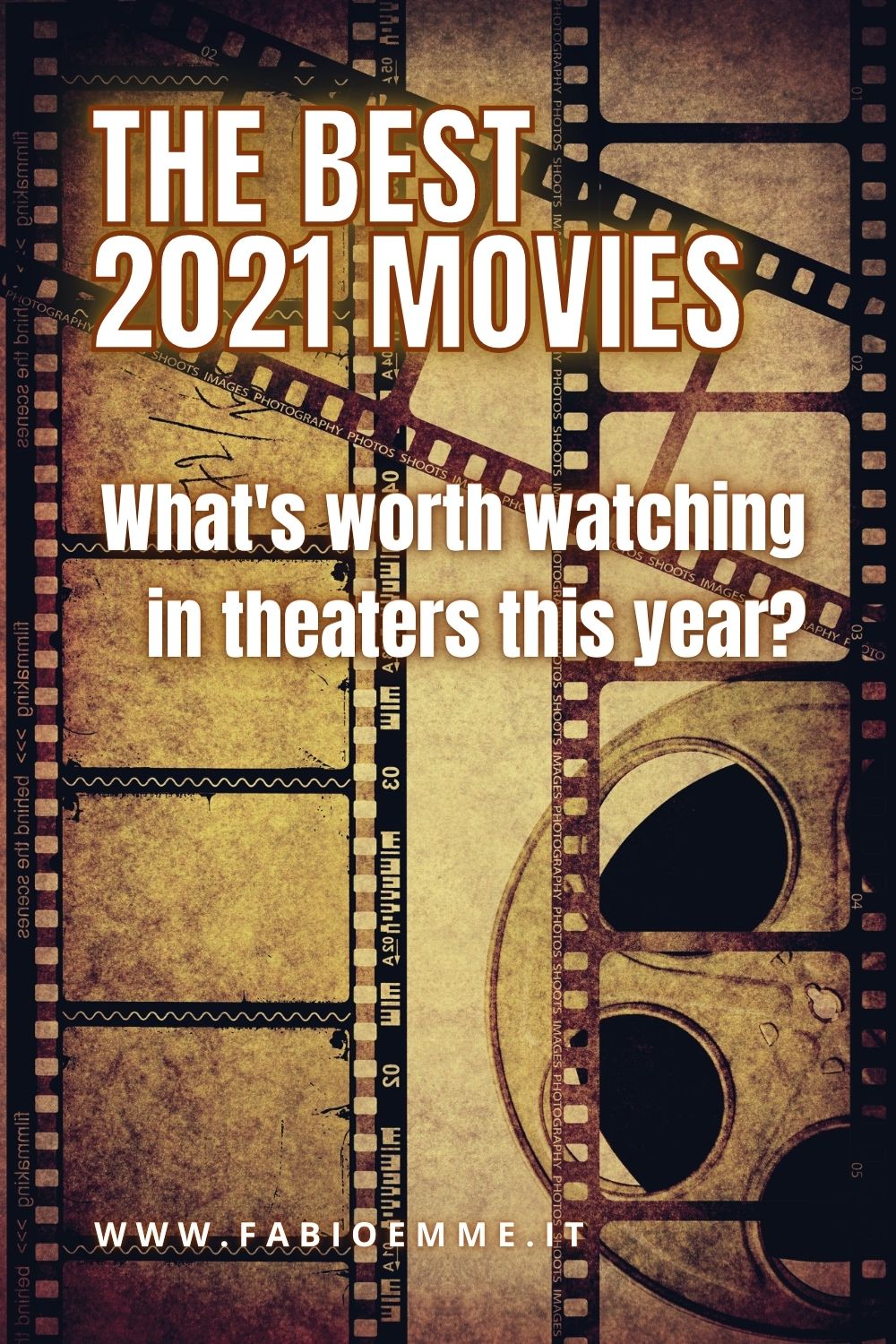 After a year that wasn’t one of the best to remember due to COVID, we were finally able to get back into theaters in 2021 to enjoy some movies.

Indeed it was a meager consolation after the lengthy lockdown we had to endure.

Not to mention that, due to recent increases in contagions, we’ll still have to wait a long time to get back to normal.

Amidst problems and restrictions, we try to take advantage of what there is to rejoice in these dark times.

On any excellent cinephile, of course, the ultimate passion was finally sitting in the theater again after so long.

In 2021 we are back to see our beloved movies at their best standards, after a year of the home cinema of streaming, DVD, or blu-ray.

So I want to try to please everyone a little by offering three different stories to suit your tastes.

I propose a supernatural musical thriller, followed by an old-school horror film and a blockbuster smash hit.

But personally, I prefer quality over quantity, focusing on a few titles and delving a little deeper into them as they deserve.

So let’s start exploring my podium for this year without comparing or rating any of my recommendations.

At most, you can give me a vote if you wish, leaving a comment to thank me if you have appreciated my advice.

A young English girl leaves her grandmother’s home and village to live in big, noisy London.

In fact, after a long time, the time has finally come for her to pursue her dream and become a fashion designer.

Initially excited; however, she can’t seem to bond with the other college girls, especially her snooty and annoying roommate.

She, therefore, prefers to rent a room from an old lady, working in a pub to pay the bills.

Her landlady is a bit quirky and very rule-abiding, but the place is quiet and allows her to study and rest in peace.

But on the very first night, she has a vision that transports her back in time as a young blonde from the sixties.

The girl would like to break through as a singer, attracting the attention of the director of a club.

At first, it seems to be a small paradise, quickly becoming a passionate relationship.

Unfortunately, her dream immediately crumbles as she learns the hard way that she cannot trust managers who quickly promise success.

After a few insignificant performances as a dancer, the aspiring singer ends up prostituting herself to pay for her living.

These visions become more oppressive and uncontrollable every day, distancing her even more from everything and everyone.

To get out of this supernatural trap, the girl investigates the end of the mysterious blonde of her visions.

English-style comedy, musical and fantasy/thriller shaken and not stirred

Edgar Wright continues his original and entertaining career, churning out one of the best movies of 2021.

This time the English director makes a darker and more adult story in comparison to the previous Baby Driver, Scott Pilgrim, or the famous Cornetto Trilogy.

However, there is room for love and passion even in this world of evil men and hopeless girls.

The film starts fast and heavy, swirling like a delicate youthful musical full of colors and characters.

Very soon, however, the story takes an entirely different turn.

The young protagonist Thomasin McKenzie‘s transformation is exciting and believable, albeit in a fantasy background.

After an essential but minor role in Taika Waititi‘s sweet Jojo Rabbit, the spotlight is all on her this time.

Slowly, her character becomes more and more like the girl of visions, the globally acclaimed star Anya Taylor-Joy.

The actress achieved success at a very young age with Robert Eggers‘ magnificent The Witch, a cult horror film that set the standard.

In this case, her performance is sublime, full of an angry class and elegance.

We remember her dreamy, frightening face as a young woman with a broken heart and torn dreams.

In summary, I recommend this film to anyone, especially lovers of old musicals who will love the pace.

But I also recommend it, emotionally, to those who struggle relentlessly to realize their passions despite everything and everyone.

After seeing one of my generation’s best directors, let’s move to another one I thought was lost until I saw his latest 2021 movie.

This story is also about a young girl, the partner, and the victim of an abusive, slacker boyfriend this time.

At the height of a stupid fight, one night, he violently slams her head against the wall.

An invisible presence begins to haunt her from that moment on, starting with brutally killing her boyfriend.

Besides being cruel and bloody, this monster also seems to have immense strength.

In addition, its passage affects any electronic device and manipulates TV screens and cell phones.

One by one, he tracks down and tears apart a bunch of doctors, inevitably leading the police to be suspicious of her.

During the interview, she states that she saw these murders in a dream-like trance state.

Further investigation uncovers that all victims were dealing with an unspecified illness when she was just a child.

At that point she realizes she has an unbreakable bond with this monster, and it won’t be easy to get rid of him.

It not only carries an unquenchable grudge against her but also against all the people she cares about.

In order to save herself and her loved ones, she will have to inquire into her past and discover the real root of this horrible evil.

I want to be honest; this is a great horror movie, but maybe not necessarily one of the best movies of 2021.

But it’s undoubtedly the one that made me the happiest, finally seeing James Wan back to his best form and true genre.

After a fantastic debut with the various Saw and The Conjuring, the director stuck with Hollywood blockbusters.

Malignant rekindles this author’s gore and dark soul, who, however, does not forget his last superhero movies.

This monster has an original and intriguing premise, and as the minutes go by, it becomes a superb comic book villain.

He owns his costume and his unique weapon, a kind of sword he forges with his hands at the beginning.

A weapon with which, for example, he slaughters dozens of cops in a phenomenal action-horror scene.

The actors and actresses in this film aren’t exactly spectacular, but they perform decently in service of Wan’s virtuously direction.

Annabelle Wallis is pretty enough to be the lead without needing to be much of an actress.

On the other hand, George Young, who is also good, looks too young to seem believable as a cop.

However, it doesn’t matter; the real star of the story is the villain who has a devastating design and brutality in every scene.

So let’s enjoy this excellent horror movie while we can, even more than just once.

Because unfortunately, at the moment, James Wan seems to have more time to waste with the pointless Aquaman sequel.

In a way, this movie made me even happier, especially for being one of the top global box office draws of 2021.

The Suicide Squad proves that what matters most in a movie is only the direction, unlike what many people think.

Unlike 2016’s painful Suicide Squad, whose director I don’t even remember, James Gunn does a phenomenal job here.

The plot is the classic foreign-land coup, with the Americans ready around the corner to stop the new dictator in place.

This is a mission that is more difficult than it sounds to accomplish in absolute secrecy and silence.

The country has a mysterious and potentially catastrophic alien weapon that it could unleash against the entire world.

So the government decides to send a team of superpowered prisoners to attack, blackmailing by any means to recruit them.

Our heroes land on the island after another team acts as a decoy to divert attention, quickly ending up all dead.

But the sexy Harley Quinn survives and ends up a captive of the new dictator, who courts her proposing to marry him.

The super team will then have to take a slight detour to rescue her while making some friends among the fierce local rebels.

Once they get together and arrive at the secret lab, it transpires the Americans are behind the mysterious weapon.

They must then choose to obey orders and look the other way or battle to the death against everyone.

I hope this is the beginning of a collaboration with DC Comics, possibly handling their entire superhero universe.

So they could finally make better than the wicked comic movies before 2021, like Man of Steel and Batman vs. Superman.

James Gunn enhances the insanity of the story and characters with some insane, but not stupid, crazy action scenes.

Each of these men and women is ideally in tune with this absurdly fun scenario, fitting into it perfectly.

In addition, their superpowers are funny and devastating, while their personal stories are sad and painful.

The fictional political context of the story is not as ridiculous as it sounds but fiercely ironic against American imperialism.

It raises to another level these super losers’ anarchy, causing endless problems but being irresistible.

Idris Elba is simply superb as the leader, initially reluctant to even participate in the mission.

The actor shows a phenomenal sense of humor and great skill in action scenes, owing to his mighty physical form.

Even better then is the gorgeous Margot Robbie, the dream cosplay of all comic book fans.

She is not only a splendor to look at, but on top, even her character is the pinnacle of the funniest sequences of all.

So, I can only thunderously applaud this worthy international success.

I’m not shy about admitting I’ve seen it in the theater three times in a row, and I’m already craving a fourth.

Still hoping that the production doesn’t ruin everything with sequels; meanwhile, let’s hold on to all the James Gunn we can find.