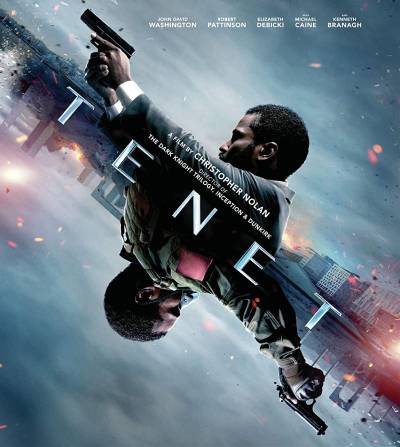 Like many of his works, it has divided public opinion between those who love it and those who can’t stand it.

I can probably understand it because of the plot complexity and certain scenes that are not easy to understand.

The attack is actually a camouflage to extract an undercover agent who owns an essential mysterious artifact.

Even while avoiding numerous casualties, the rescue ends tragically, and almost all but one of the agents end up dead.

The survivor then goes to a research lab, unaware of what awaits him and having only one mysterious watchword: Tenet.

He discovers that all governments are at war against forces of completely unknown technology and purpose.

These enemies send resources from the future to their allies, directing them on targets to bring down our society.

All of these artifacts carry a different entropy than our temporal flow and appear to move backward to our eyes.

Tracing their witnesses and clues, the agent reaches a powerful Russian trafficker who seems complicit with their future enemies.

This man responsible for the attacks is the only way to get the upper hand in this war.

Only then can humanity survive any further aggression from our increasingly ferocious and unstoppable descendants.

They are willing to eradicate us from time and steal our world, facing a future of devastation and death.

We can say what we want about Tenet, but it has a very intriguing premise like all Christopher Nolan movies.

Indeed, the idea of building the action scenes back and forth enhances the editing skills of the famous British director.

The only problem is that sometimes certain scenes or dialogues are perhaps a little too unnecessarily long.

Such an issue exacerbates a storyline requiring enough attention to follow to avoid missing the various details.

However, I think the originality of his writing and the solid direction style is still indisputable.

Perhaps the quality leap he made with the big productions, after Following and Memento, has somewhat overloaded his narrative ability.

His sci-fi is still an example of an artist with great ideas who always creates dazzling entertainment for the audience.

Finally, Tenet is a movie that I enjoyed when I saw it in theaters in 2020?

Maybe I’m not objective because I was craving cinema after the lengthy covid lockdown, but I really appreciated it.

Personally, I would have cut at least 30 minutes out of it to make it smoother and lighter.

But I can’t say it’s a lousy example of science fiction because it succeeds in enthralling and being intelligent.

Some scenes are just amazing, and the story is compelling, something that isn’t for sure all the time.

So it’s definitely a thumbs up for me, tolerating a few flaws that don’t ruin the overall experience.

Tenet in theaters is sensational when a movie has a $200 million budget and a pro like Christopher Nolan at the helm.

Again, you can say you didn’t like it, and maybe it goes on too long at specific points, but it’s still a joy to watch.

By the way, the special effects aren’t even that crucial in comparison to other blockbusters, where they’re almost ubiquitous.

What makes the difference is the director’s skill in editing, creating almost every action scene in two different time frames.

If we first see certain events without immediately understanding, everything has another meaning by reversing the time direction.

In addition, the director once again relies on an outstanding international cast to bring his characters and plot to life.

The main protagonist is John David Washington, who does well in the action scenes and plays a somewhat generic hero.

His character keeps enough attention on himself throughout, but I didn’t find him so attractive.

His handyman assistant is much better, an excellent Robert Pattinson, far more ambiguous and intriguing.

She is a suffering wife but always fascinating in her pain, sorrow for her son, and bursting with hatred for her husband.

Finally, above all reigns the great villain Kenneth Branagh, a mad despot but also human and passionate.

He makes the whole second half of the story fascinating, offering all the main characters a worthy challenge.

In conclusion, however, this film was an immense success at the box office around the world.

But objectively, Tenet and Christopher Nolan in 2020 didn’t have much competition from many other movies.