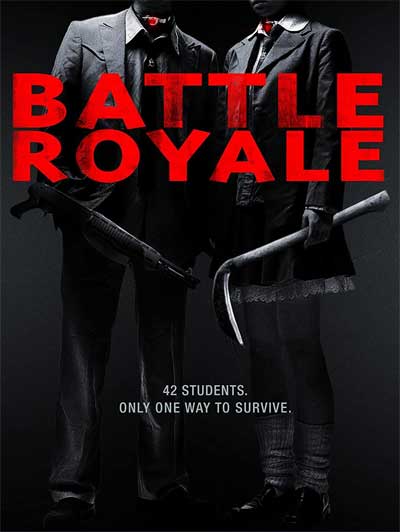 Battle Royale is the last movie of the great Japanese director Kinji Fukasaku, out in 2000 after many problems with censorship.

The basic idea of this story made a lot of noise, like the famous A Clockwork Orange by Stanley Kubrick.

Indeed, in this case, we talk about youth violence and the government’s brutal repression.

It all takes place in a fictional Asian nation with a new law to combat the growing delinquency.

This Batlle Royale Act establishes an annual random drawing of students and takes them to a lonely island.

Initially, these kids have no fear, as they believe it’s just an ordinary school trip like any other.

But when some soldiers brutally welcome them, an old professor of theirs explains to everyone what the game’s rules are.

The soldiers put a collar on each student, which will explode if they tamper with it or try to escape.

They also give each of them a backpack containing several days’ worth of food and a totally random weapon.

Only one will survive the game, which will only end when everyone else is dead, no matter what.

Without many compliments, the boys forget any friendship and begin to slaughter each other mercilessly.

Some among them gather in small groups, depending on their acquaintances and affinities.

However, even these groups quickly break up once the blood starts flowing.

Their only chance will be some surprise guests, who might give trouble to both the military and their ruthless professor.

As said, censorship hit Battle Royale very hard in 2000, significantly reducing the distribution of this movie.

In some countries, such as Germany, there were cuts and changes, and in the United States, it never reached theaters.

It also gave similar stories with a deadly competition between teenagers, such as the famous Hunger Games saga.

These films were a huge success, but I think they do not reach the value of this masterpiece of Japanese cinema.

Let’s be clear, they are good action entertainment with good direction and excellent actors, and I don’t want to belittle them.

However, Battle Royale has humor and mischief that they don’t, plus a distinctive and unique directing style.

Fukasaku perfectly combines the visual violence of his Yakuza movies with a grisly coming-of-age tale like Lord of the Flies.

After the brief introduction, the rhythm quickly picks up, then alternating comedy and romantic scenes with personal revenge shoot-outs and fights.

The absurdist irony brings a smile to your face in the most unexpected moments, like a cheerful smiling girl’s vicious opening video tutorial.

Exactly how, when we least expect it, the story veers into the personal dramas of the many contestants in this brutal game.

The glorification on good and evil in an Eastern fashion

Battle Royale represents the epitome that pushes everything I love about Eastern cinema to the max.

Although the students are obviously the victims in this story, it’s hard to categorize them as the good guys.

Indeed, the minute they have weapons in hand and the game begins, many of them become psychopaths in a manner they would never have believed.

This way of conceiving human nature is a far cry from Western films, where there is often simply the good guy who has to deal with the villain of the day.

Besides an immortal director like Kinji Fukasaku, the first protagonist of this story is the great Takeshi Kitano.

In the role of a professor named Kitano, the actor gives an extraordinarily chilling and unforgettable performance.

His viciousness towards the kids is pure and uncontrolled, killing some of them brutally only in the initial briefing.

Also, for Quentin Tarantino‘s Kill Bill fans, it will be easy to recognize the sweet terrifying assassin Chiaki Kuriyama.

Starting as a somewhat dark student who stands on the sidelines towards her friends, her violence fully explodes once on the island.

Even more dangerous is Takashi Tsukamoto, a contestant in the game by his own choice after surviving a previous edition.

In conclusion, Battle Royale is one of the most influential films in the Western cinema in the last 20 years.

Although many people don’t even know it, its merits are apparent and undeniable.

So I hope you’ll run out to see it if you missed it, hoping you’ll find it as wonderful as I did.

Desperado – Revenge Has An Exciting...

Halloween Movies – How to spend...