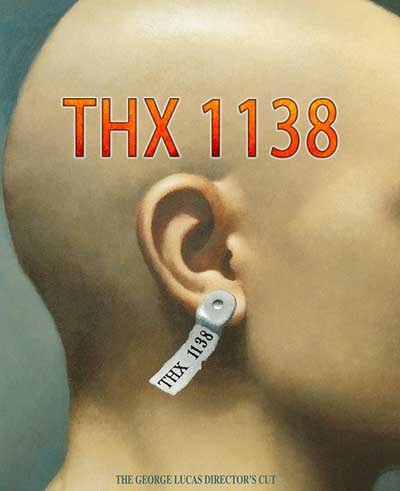 Many years before achieving success with Star Wars movies, George Lucas debuted as a director with THX 1138.

The story takes place in a distant dystopian future, where an ordinary laborer wakes up every day to go to work.

Like everyone else, he has never had a real name, but only an identification code, THX 1138.

Indeed, there are no politicians or rulers in this new world, and everything is under the computers’ supervision.

In order to keep humankind under control, everyone must take psychotropic drugs daily or face severe live TV punishments.

Nevertheless, a woman convinces him not to take the drugs, thus starting a secret relationship.

Even sex in this society is forbidden, with computers managing the raising of children inside artificial sacs.

But new awareness of his thoughts and emotions gets in the way of his productivity, and he risks a severe accident.

However, everyone ultimately discovers their relationship, inevitably, when she becomes pregnant.

The computerized authority locks him up in a detention center for rebels, from which he will try to escape in every way.

But the world he knew no longer exists, so he’ll have to find another way and another place to live.

With a movie like THX 1138, George Lucas creates a ruthless sci-fi parody of the human race.

In the world where this soulless bureaucracy dominates, production efficiency numbers are all that matter.

Every man has to give up having his own identity, dressing, and thinking all the same.

During their long working days, controllers monitor their physical and mental condition minute by minute.

Despite all this, fatal accidents are the order of the day and steadily increasing.

In an attempt to alleviate the evident psychological problems of this inhuman condition, computers resort to drugs and religion.

But in the end, they are only machines, and no matter how advanced they are, some men still manage to violate their systems.

For example, a friend named SEN 5241, hack the computers to get him assigned as his roommate.

Even from the infinite white space of the prison of outcasts, you can escape, knowing which direction to walk.

And when the robots hunt down fugitives, they too must stay within budget or else give up.

In conclusion, this is absurd but precisely because of that terrifying future, as it is also absolutely believable.

We can think and say what we want about the Star Wars saga, and everything has been said about it over the years.

Be that as it may, it is undeniable that they have forever changed our conception of how science fiction movies should be.

The long epic of the Jedi versus the Sith is a fantastic blend of fantasy, magic, struggle, friendship, and love.

A universe where you can create anything, becoming even video games, TV series, and cartoons over the years.

On the contrary, THX 1138 sadly wasn’t a box-office hit, and even the critics quickly forgot about it.

A pity also for Francis Ford Coppola, executive producer, who would conquer all the following year with The Godfather.

This movie also shares the main character of this dystopian future, Robert Duvall, in its cast.

The actor would later work with Coppola again in the crazy surf-loving sergeant in Apocalypse Now.

In this story, his acting is quieter and more controlled, as a man who is a helpless victim of the system.

Standing beside him is a great Donald Pleasence, the unforgettable Dr. Loomis from one of the greatest slashers ever, Halloween.

He plays the role of the protagonist’s friend with an obsession to be his friend and accomplice against the system.

Two enormously talented actors who alone are worth the ticket price, holding almost the entire show on their shoulders.

In short, THX 1138 is a film that we should all see at least once in our lives, especially in the current increasingly difficult world situation for everyone.