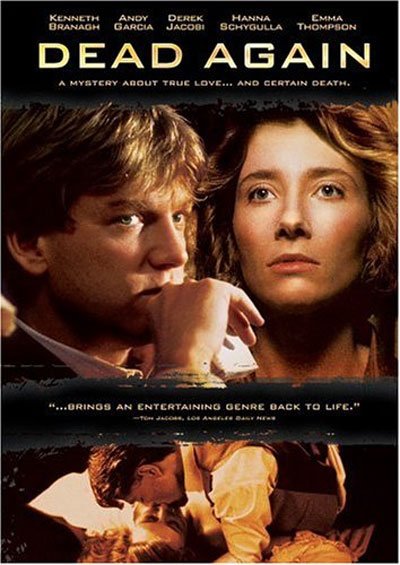 The Irish actor and director made an intriguing and supernatural story with Hitchcockian solid influences.

In short, a private detective must investigate a woman wandering around the city in a state of confusion.

From the doctors’ analysis, she appears to be uninjured, yet she can’t remember anything about her life.

With no clues to go on, he consults a hypnotist to regress the woman’s memories and discover her identity.

Initially skeptical, she ends up agreeing and undergoing the treatment, which works even exceedingly well.

Indeed, during hypnosis, the woman goes back so far in time to remember moments from another past life.

Reviewing some old newspaper articles, they discover she died during the ’50s, brutally murdered by her husband.

Meanwhile, a man shows up claiming to be the woman’s partner, running away when he turns out to be a fraud.

Then the detective realizes she is in danger due to some reason he cannot understand.

So they decide to investigate further into her previous life, finding increasing connections to her mysterious present.

Somehow the old unsolved murder haunts their lives, and both of them will have no peace until they discover the truth.

Karma punishment is not over with death

Although in the ’90s, I was still very young and not familiar with Alfred Hitchcock‘s movies, I liked Dead Again at first sight.

The story was so intriguing and original as to be irresistible, besides having few but beautifully crafted characters.

Perhaps logically, the various plot twists and clues to the crime don’t all make sense, just as some of Hitchcock’s masterpieces.

But after all, watching a movie is not like taking a detective course, where logic and truth come first.

Movies are entertainment, and as such, they should arouse emotions and keep us hooked on exciting characters and stories.

Having said that, the idea of discovering previous lives through hypnosis is suggestive and exciting.

Thanks to this premise, we are practically watching two stories happening at the same time, even if on two different temporal planes.

The part in the 1950s is a beautiful black and white film noir, a drama of love ending in blood and tragedy.

On the other hand, the story in the present has a style and rhythm of editing much closer to modern cinema.

The mystery remains for us to discover until the last minute without even a moment of boredom that spoils everything else.

However, in both, the method of engagement and unfolding of the mystery is purely Hitchcockian, creating magnificent and endless suspense.

So with all these elements, the result could only be a success, luckily even at the box office.

The inexorable fate justice and to end dead again

Kenneth Branagh makes excellent use of the plot by creating a story that reveals one piece after another.

Plot twists and turns happen at the right time and perfectly blend with amusing and sentimental scenes.

The director also plays one of the main characters, a delightfully clever and funny detective.

This is a familiar figure in the 1930s and 1940s noir, like the famous detective Humphrey Bogart in The Maltese Falcon.

Equally successful is the mystery woman character, another role reminiscent of the good old days.

Here the role is performed by the beautiful and skillful Emma Thompson, who at the time was also Branagh’s wife.

In her two roles, she acts perfectly, confused and lost in the present and love but fearful in the past 50s scenes.

There is a believable, passionate, and funny relationship between these two characters that alone makes half the film work.

Yet among the two lovers, there is the shadow of the cynical journalist Andy Garcia, a seductive and unstoppable man.

He will also be, at the beginning and at the end, the confessor of the alleged murderer of such a terrible crime.

Finally, we must also mention the small but funny role of Robin Williams, as always decisive on screen.

The actor plays a former psychiatrist who lost his job long ago during a minor scandal.

Today he’s the lowly supermarket clerk, but he advises the detective with his experience on the best line of action.

This role perfectly closes the Dead Again cast, making it more than just an entertaining movie.

The entire story possesses an aura of ancient magic and fascination that blends perfectly with the modern thriller.

Indeed, in my opinion, it is a true 90s cult that all enthusiasts should watch at least once in life.