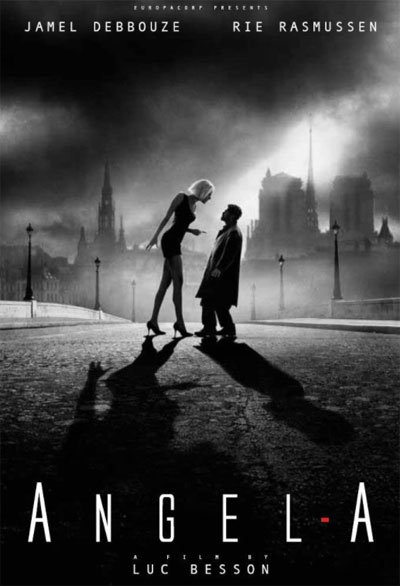 Angel-A is a great Black and White portrait of Paris, a romantic comedy and one of Luc Besson‘s lesser-known movies.

The story begins with an insignificant, petty criminal in debt to many of the city’s criminals.

He receives a request from his loan sharks and must come up with a massive sum of money by the end of the day.

Having no hope of arriving in time, he still seeks help from the few people he knows.

In the end, however, when they all refuse him, he decides to throw himself off a bridge and kill himself amid despair.

However, right at the fatal moment, he realizes that someone else next to him has the same idea.

The other aspiring suicide is a beautiful tall blonde woman who jumps into the river when she notices him.

The man follows her with a leap, barely swimming but pulling her out of the river just in time.

At that point, the two become inseparable, and the woman starts following him like a shadow everywhere.

Indeed, she feels she owes him a life debt and wants to repay it by helping him solve his problems.

They visit the creditors waiting for the money, one after the other, looking for a solution each time.

But that long day still holds many surprises, like the real reason for that miraculous, unexpected meeting.

I’ve never understood why so many people snub this film from Luc Besson‘s long career.

Aesthetically I think there is nothing to complain about, showcasing a magnificent and unforgettable black and white Paris.

Photography enhances the beauty of the iconic city of lovers, full of places that have made history in all kinds of art.

The two main characters are extraordinary, complementing each other perfectly.

I loved their every dialogue, hilarious and romantic at the same time despite their significant differences.

The cynical difference of the man constantly clashes with the proud confidence of the woman, in beautiful contrast.

How can you not love such a lovely little guy who falls in love with a tall blonde model?

True, the last part of the movie may push too much on the drama and lose some rhythm.

But I can say that this does not spoil the whole show, which closes leaving a broad smile on our faces.

In conclusion, the story works, and so do the characters; the location is terrific, the director is a guarantee.

Angel-A is a movie bursting with style and class, entertaining and romantic like few others, albeit with minor lapses.

So, for once, let’s be reasonable and have fun like we did when we were kids.

After all, we can gloss over the minor flaws, fewer than the significant joy of the 90 minutes running time.

The most American among the European directors

While making great action films, spectacular and entertaining, he does not forget the roots of European cinema.

Therefore, the psychology of the characters he creates is closer to European cinema, particularly the French nouvelle vague.

In this case, Angel-A works for most of the movie, enchanting with its delicate and innocent vulgar sympathy.

The situations vary with humor and intelligence, maybe exaggerating in the final with some naivety.

In addition to the excellent direction, what works excellent holding up the show are primarily the two main leads.

Jamel Debbouze is a good criminal, like the desperate characters in Frank Capra’s old comedies.

It is impossible for us not to like this little crook and swindler, although he is even a bit pathetic in certain situations.

When you add the beautiful Rie Rasmussen to the story, the mixture becomes quite explosive.

We walk with them through Paris’ strangest places, in an almost noir-like black and white of the 1930s.

I repeat it’s not a perfect movie, but I have to say I literally loved it.

If you’ve never had a chance to see it, give it a chance, and then let me know if I’m right or if I’m crazy.