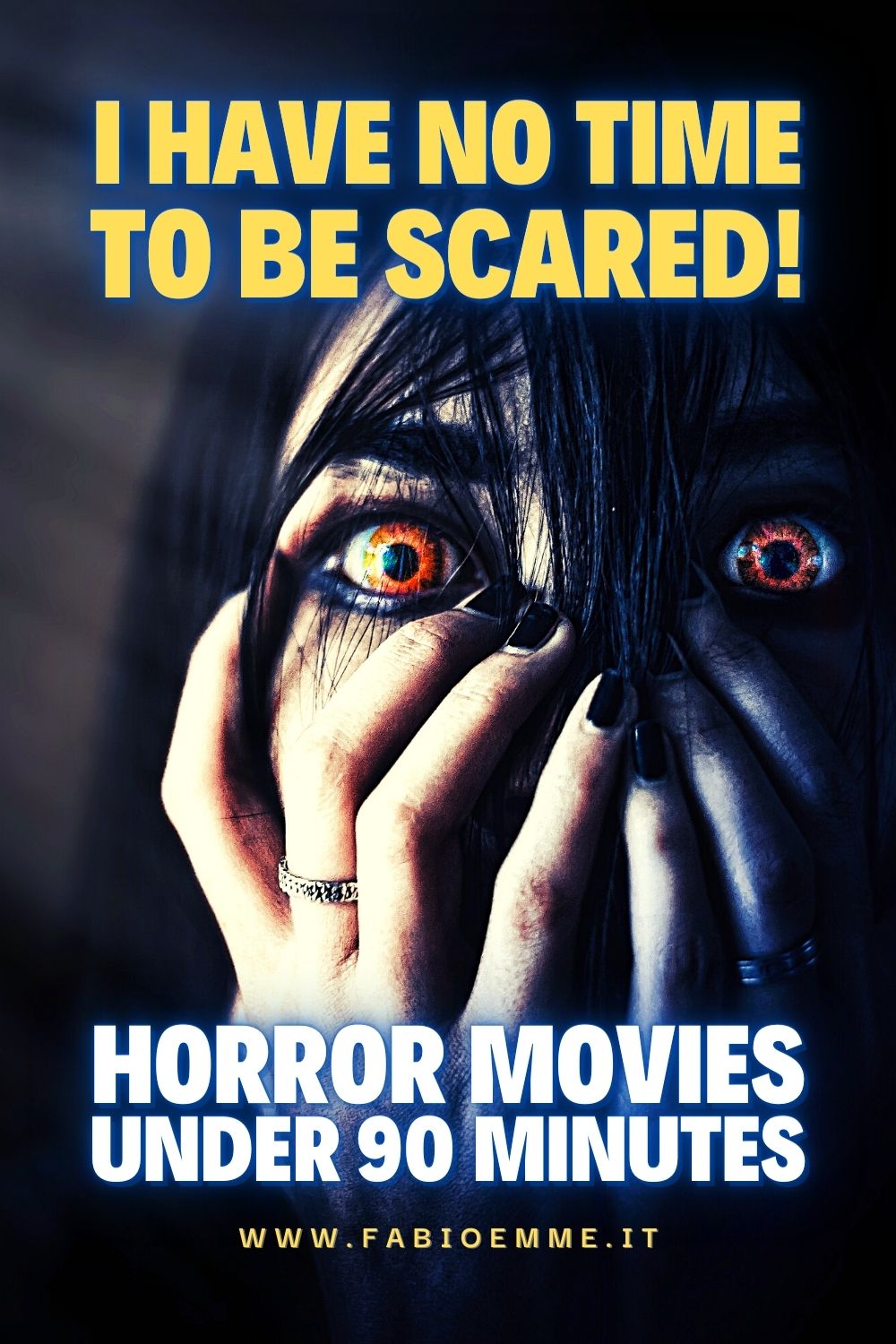 Staying under 90 minutes may seem short to horror movie fans, but sometimes we don’t seem to have enough time.

When we’re young, every precious minute of our days goes away between school and friends, and once we grow up, it certainly doesn’t get any better.

Work, home, and family absorb every moment of our lives, leaving very little to leisure and cultivate our passions.

As we all know, having a passion is fundamental, whatever it may be, to keep our hearts beating beyond our minor daily problems.

Furthermore, the horror and fear genre must get special attention to enjoy the tension and suspense of the story entirely.

Let me say straight away the best way to enjoy a movie, whether it’s a horror and lasts under 90 minutes or not, is still to go to the theater.

But conceding that we can’t go out every night, we still can always ingeniously do otherwise in our little home environment.

My favorite way is always to watch them late at night, in total silence and darkness, in a small room with as much isolation as possible.

If it’s impossible to keep a decent audio volume, you can sometimes use the convenient wireless headphones even better than a Dolby surround system.

Assuming you don’t watch many of the modern bad movies full of full-volume jumpscares, an easy trick of the mediocre directors.

Fortunately, this is not the case of the horror movies we’re going to talk about today, all of which last under 90 minutes, less than a classic soccer match.

So keep an eye on the clock and start with the list. I assure you that there are all kinds of emotions waiting for you in the dark.

A group of friends decides to spend an adventurous weekend exploring some caves in the Appalachian Mountains.

They love extreme sports and are have intense physical training, so they do not expect great difficulties.

Being too confident of their abilities, they descend into the darkest depths where explorers have never gone before.

Suddenly a rock section falls, blocking their way back. At that point, they have no choice but to keep forward, hoping to find another exit.

But one of them seriously injured her leg, and another has signs of psychological failure.

The woman was a young wife and mother, losing the whole family just one year before a car accident.

As if that were not enough, they discover with terror not being alone in the dark depths of that abyss.

In fact, in that area where humans have never entered, a human species has survived that evolved differently.

These humanoids are extraordinarily agile and, although completely blind, they can hear the slightest noise in the dark.

Without hope of receiving help from the outside, they will quickly begin to fight each other beyond the mysterious and aggressive enemies.

A cheerful weekend of darkness and claustrophobia

Neil Marshall is a director about we talk before, appreciating his excellent dystopian action Doomsday of 2008 with another female heroine.

His style is strong of an always different choice of genres and themes in his stories.

Very different movies join by the elegant effectiveness with which the director combines entertainment with the intelligence of the plot.

A talent that confirms even in this movie with few actresses and dark and narrow natural locations.

The women’s psychology is not trivial, instead of uses internal tension in the group for the madness of her story.

Above all, of course, the character of the grieving widow Shauna Macdonald stands out.

Trying to lift her from her pain, her friends unwittingly frame her in a nightmare with no way out.

A mistake that all of them will pay dearly with an ending without redemption or happiness for anyone.

The Descent was a significant achievement movie under 90 minutes, earning nearly $60 million worldwide against $3.5 million of its cost.

This success allowed the director to get to bigger international productions, like the last Hellboy remake in 2019.

Now let’s talk about one of my favorite movies of the past few years, a horror gem lasting precisely 90 minutes.

The story begins with an ordinary small-town cop going to the small local hospital after injuring a suspect during an arrest.

It doesn’t seem a severe case, and after entrusting him to doctors’ care, he stops to talk to his ex-wife.

The two still have a cordial relationship, despite no longer being a couple after the loss of their unborn daughter.

Suddenly, however, one of the nurses goes crazy, maiming a patient and attacking the cop.

Stunned, the man has no choice but to fight back and kill her.

This outburst of senseless violence will only be the beginning of a long night of terror and madness for all the hospital guests.

When they go outside to get help, a sect of hooded religious fanatics surrounds the entire building.

These strange individuals attack them with knives, forcing them to retreat inside and barricade the doors to defend themselves.

However, even in the hospital, they are not safe since some patients mutate into dangerous and monstrous creatures.

The entire building seems to shift, revealing hidden passages that may provide the key to unlocking that delusional nightmare.

At that point, all that remains is to hold out until dawn, looking for the mysterious cult leader hidden among them.

Indeed, someone has been organizing this magical ritual for decades to summon a demon from another dimension.

Tentacle monsters from the 70s and Lovecraftian impressions

Jeremy Gillespie and Steven Kostanski are relatively new directors with extensive experience in the horror movies’ art and makeup department.

As they conduct this little project, their talents slowly but surely emerge.

So how does their story apparent tranquility, escalating into a growing madness with a truly intriguing and exciting plot.

Indeed, what we might first categorize as yet another “monsters vs. humans imprisoned in one place” plot becomes something else.

The timeless and formless monsters insinuate their way into the souls of men, diabolically corrupting everything around them.

After crossing the chasm of grief, both are looking for redemption but will find something very different.

As the biblical Adam and Eve, but horror, these two lovers are pivotal around which all the other characters revolve.

Interestingly, the priest/demon hunter played by Daniel Fathers is initially violent and grumpy with everyone.

He is an atypical religious character, cruel in pursuing what he believes to be the greater good.

Also, religiously, he’s seemingly willing to do anything to accomplish his mission. But, as we quickly discover, he also doesn’t have a clue about what’s going on.

Finally, crazy doctor, Kenneth Welsh is phenomenal, almost appearing as a secondary character to be quickly forgotten at first.

Exactly like the rest of the plot, however, we could not be more wrong, quickly becoming a fundamental pillar of the story.

I hope, as usual, that I haven’t revealed too much, because this is a horror movie truly to see and discover.

The Head Hunter begins in the heart of the forest, and a warrior lives alone in his isolated and hidden shack.

Day after day, he hunts and kills monstrous and dangerous creatures that besiege his home.

In addition, when he finds a message delivered with an arrow, he must hunt the monsters threatening the nearby castle.

Its existence is an endless cycle of killing, forging weapons for hunting, and healing the wounds of its battles.

His body scars and the head collection of his shack’s wall are the only proof of his existence.

He sometimes goes to his daughter’s grave, mourning her disappearance years earlier during a cold winter.

Until one day, opening a message from the castle, he has a revelation been waiting for a long time.

Indeed, the cruel monster who killed his little girl has returned, more than ever thirsty for human blood.

For him, then the time of mourning ends, and the day of revenge arrives.

But the creature he faces will prove to be more devious and dangerous than he thought.

The director Jordan Downey creates a work of significant impact with a great epic and adventurous path.

Working with a budget of only $30,000, a crew of 5 people shot, he gets the most out of every resource at his disposal.

The warrior’s shack is a mystery to be discovered, full of references to events never narrated but only suggested.

The machines with which he builds his weapons and his medical formulas are equally fascinating.

By showing his total isolation and self-sufficiency, we can understand that man has had no contact with anyone for years now.

The thought of avenging his daughter torments him every day and fills him with anger that he then blows out by tearing apart his enemies.

Christopher Rygh plays with great conviction and commitment to this knight in a war in his endless crusade.

His size and physical posture are powerful and implacable, although we never see his battles against monsters.

And then, when the camera close-up his face, the actor expresses all of his physical and mental pain without saying a word.

Grief is his only companion, mourning his daughter’s loss every day he failed to protect when she needed him most.

In conclusion, The Head Hunter is an under 90 minutes horror pearl, making a tremendous uncommon movie from its misery.

A success that was not at all expected, indeed succeeding where many blockbuster productions often fail miserably.