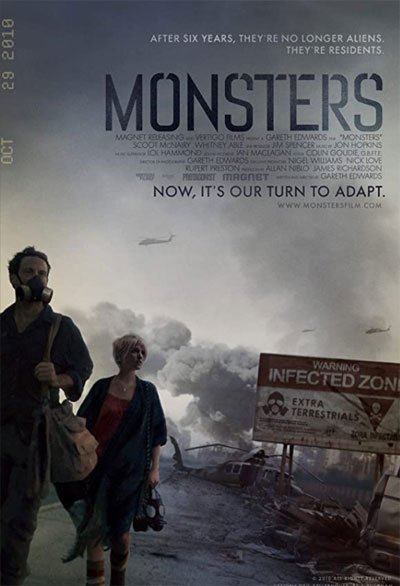 Monsters is a thrilling romantic journey inside a sci-fi movie, marking the 2010 directorial debut for Gareth Edwards.

The story begins with several alien creatures appearing on the border between Mexico and the United States.

Initially, the army attacks them repeatedly, without succeeding in any way to contain their spread.

Realizing their impotence, the U.S. government erects a wall at the border, declaring the entire area under quarantine.

Years later, after collecting enough material for his newspaper, a professional photographer is preparing to leave San José.

However, his boss contacts him asking for a favor, actually almost an order, to find and bring back his daughter to the United States.

Indeed, as the crisis worsens, the authorities will close any entry at the border within a week.

Therefore, it will be impossible for anyone to enter America due to the total embargo on planes and boats.

The journalist immediately finds the young girl, which should get married in a few days.

But after a drunken evening, he loses her documents, and they have no choice except to travel up the river with some smugglers.

They begin a long journey in the quarantine zone, initially not tolerating each other.

Then, in the growth of feelings and emotions, they discover they are not in such a hurry to reach their destination.

The great wall of incomprehension and intolerance

The incomprehension this story is about, however, is not between the American and Mexican populations.

Indeed, they are the two protagonists who initially do not understand each other, set apart by their age and social class.

He is the classic freelancer, cynical and insensitive, with already a failing marriage behind him.

On the other hand, she is the spoilt daddy’s girl, looking for fun before marrying her American boyfriend.

Those are only two facades for both of them, behind which they hide their dreams and disappointments.

The forest and the monster-infested Mexican rivers become, at that point, the beautiful background of these two touching personal stories.

What they do on their long road to the border mirrors the paths they take within themselves.

In the same way, the whole of humanity misunderstood these aliens’ purpose, not planning a great world invasion at all.

Maybe they, too, like the two protagonists, want to live in peace and enjoy the right to exist and be happy.

The force flows powerfully in this director

Gareth Edwards has only made three films so far, but his enormous talent is already clear to everyone.

We owe him to make Rogue One, one of the very few new Star Wars chapters worth anything.

Likewise, I thoroughly enjoyed 2014’s Godzilla, which finally represented the tremendous power of the infamous Japanese monster in the right way.

2010’s Monsters didn’t have the same budget as the other two movies, but that might be for the best.

This small independent production focused on the characters with little money, creating an extraordinary and unusual sci-fi drama.

In this sense, it is contributed significantly by the two lead actors being unknown and therefore believable as ordinary people.

Scoot McNairy, as the journalist, is the typical employee who must please the boss, assuming the girl’s responsibility.

The man is charming, intelligent, and pleasant, as well as stupid spending the night with a woman who robs him of everything.

After Whitney Able rejects and closes the door in his face, this theft is what forces them to make the long trip.

Even this girl is an exciting character, initially seeming only the American blonde stereotype.

However, as the story goes on, her delicacy and sensitivity emerge, fascinating and enchanting the cynical journalist.

To sum up, Monsters is a unique film, with freedom and love we can hardly find in a significant production.

Therefore, I recommend watching it to everyone who loves stories about aliens since you will rarely find others of this kind.