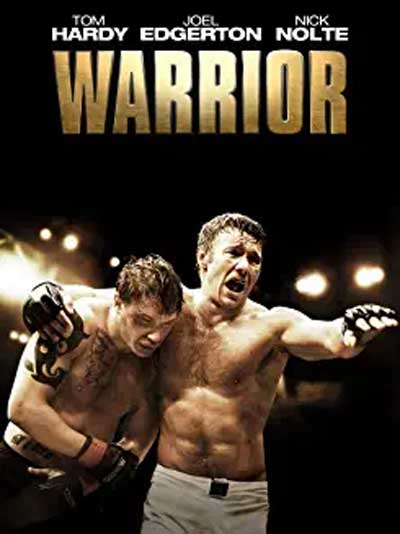 Warrior stands as one of my favorite martial arts movies, a 2011 production finally combining entertainment and emotion.

At the beginning of the story, we see the lives of two men apparently very distant and different from each other.

One is a reputable college professor, seemingly happy and with a beautiful family.

Unfortunately, he is facing a difficult financial situation and is in grave danger of losing his home.

The other is an Iraq War veteran returning to his father, left behind in youth because of his drinking problems.

Today, however, he needs his help, as he is also an excellent wrestling coach.

Both end up signing up, in different ways, for a rich martial arts tournament that will take place in Las Vegas.

For them, winning the millionaire’s prize is the only way out of their precarious situation.

That’s when they meet again, and we finally find out what they have in common: they are brothers.

The professor was the first to run away from his problematic family, together with his girlfriend, whom he later married.

On the other hand, the soldier abandoned his father only later with his mother, who got seriously ill.

Therefore, the great tournament becomes an opportunity to become champions and solve once and for all their long-standing problems.

Love, family and a lot of beatings

Warrior is a 2011 movie that successfully blends martial arts, family, and emotion like a few others.

Finally, in a story with lots of fighting, we also have an extremely worthwhile plot and characters.

The psychological aspect of these modern warriors reveals calmly and cleverly with a wisely slow and meandering pace.

Through the lives of these two brothers, the story is about a simple but engaging family conflict.

These two fighters are different not only in daily life, but also in fighting style.

We notice his total indifference to success, immediately leaving the ring after each victory without caring about the applause.

However, in his personal life, he is very unstable, a victim of his war demons and memories of a father he cannot forgive.

Instead, the professor is a calm and thoughtful man, but with a dark side that vents fighting clandestinely.

However, the style of his fighting with intelligence and patience is also characteristic.

Since he doesn’t have his brother’s muscles, he focuses on his grappling skills and projections, waiting to strike at the right moment.

In short, this is one of the few movies that brings together the psychological and sporting sides, succeeding in both.

Filmmaking and a cast which make all the difference

Warrior is undoubtedly the best piece in the filmography of Gavin O’Connor, an author I have always appreciated.

Probably we will never remember his movies as the best in history, and they will never win an Oscar.

Nevertheless, the director always succeeds in doing his job and entertaining his audience with intelligence.

In this case, since it is a tale of struggle and family, the fundamental choice for the cast is totally successful.

Tom Hardy confirms to be one of the best and most versatile actors of his generation, as we have seen in the recent Capone.

The physical dominance he has emerges violently so much more in this film than what we saw in The Dark Knight Rises.

Moreover, his acting style is perfect, wild and dramatic, and humble and private in a matchless combination.

Equally good is Joel Edgerton, who is not so physically explosive yet, just as he is believable in the various fights.

Besides, he has to cover much more footage with family affairs and his trainer Frank Grillo.

Last but not least, we have one of my all-time favorite acting supreme monsters in the father’s role, the mighty Nick Nolte.

The actor outshines the rest of the cast with a phenomenal performance, bringing together all the other characters’ stories.

As a father, he’s continually disheartened but determined to stay close to his son.

In summary, Warrior is a must-see 2011 movie for anyone, and not just martial arts fans.

I admit I snubbed it from the trailers expecting the usual tournament-to-win story, but I was totally wrong.

The actors and the direction got into my soul and will stay there forever, as I wish would happen to you.