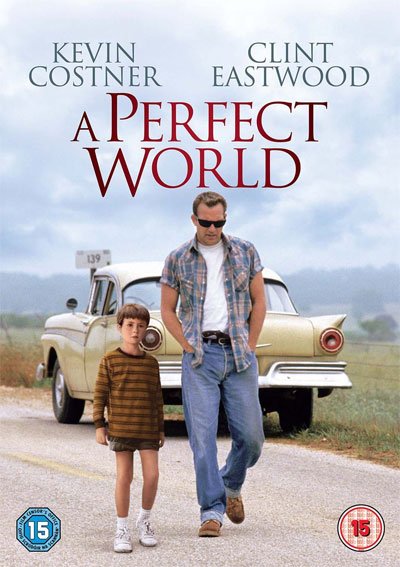 A Perfect World is a 1993 movie about a pair of escaped convicts who find refuge in a small suburban home.

After robbing the family, they threaten the mother by taking her child hostage and running away.

At first afraid, the child will later become friends with one of the criminals.

Once alone, they try to reach Alaska, dreaming of finally finding a perfect world of peace and freedom.

Meanwhile, a strict Texas Ranger sets out on their trail with the help of a young female criminologist.

The Ranger must untangle politics, blind stupidity, and a rugged fed who accompanies him as he tries to solve the case.

Through the eyes of his little hostage, the convict begins to see his lost youth again.

The child knows the small pleasures of life for the first time and discovers a world larger than his small family.

However, the lawmen are getting closer and closer, and their getaway has become an important news story.

The Ranger will attempt to control his men’s trigger-happy ways to prevent the story from ending in tragedy.

In the land of the free with cops at your heels

A Perfect World is a beautiful movie by Clint Eastwood, released in 1993 at the same time as In the Line of Fire.

Eastwood was actually playing the lead role in the latter as he began directing this one.

In Wolfgang Petersen‘s movie, he was one of JFK’s bodyguards, seeking redemption for his failure.

However, in this case, Kevin Costner‘s character wishes for forgiveness, trying to get back to his father in Alaska.

At first, he seems like a cold, psychopathic killer, especially how he treats his fellow fugitives.

But once the child comes into play, we begin to discover him in a different light.

In his way, he is also still a child who has never lived an everyday life as an adult.

Both of them then escape from a world that doesn’t understand them, seeking freedom and not violence.

Unfortunately, every action has a price to pay, including the Ranger, who has the prisoner’s first youthful arrest on his conscience.

The nameless old gunslinger transcends in directing one of his movies that I appreciate the most.

It’s really impossible for anyone, even the most finicky of critics, to find fault with it.

The pacing is correct, the jokes and dialogue fantastic, and every character works to perfection.

In one of the best roles of his long career, Kevin Costner plays a complex and deep character.

Although he’s a lovable man, we can’t always understand him or be on his side when he wants to be.

With his actions, he always displaces us, alternating moments of kindness and fun with others of great cruelty and brutality.

T.J. Lowther is very tender in the role of the child, fragile and lonely, who becomes friends with the man they all want to capture.

We also remember the excellent Laura Dern, an actress that I adore madly since David Lynch’s Wild at Heart.

Here we see her in the role of the criminologist, initially clumsy and confused, but then crucial to catch the man on the run.

In conclusion, A Perfect World is a splendid film that astonishes and entertains gorgeously, today as in 1993.

A work of cinematic art that unites all generations through the universal themes of love and friendship.