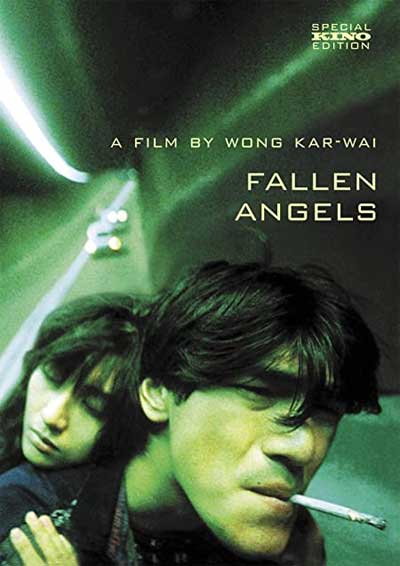 Fallen Angels is a 1995 film by Wong Kar Wai, one of the best Chinese directors of his generation, if not perhaps ever.

We follow the intertwining and distant events of three wildly unusual characters, a three-lane story set in Hong Kong.

The first is a professional killer, as lonely in his personal life as he is efficient and deadly in his work.

Secondly, a beautiful and mysterious girl maintains contact between the underworld and the killer, getting him new contracts.

Finally, the last is an entirely silent slacker who lives with his father in the same building as the woman above.

By looking closely at their lives, friendships, and loneliness, we realize why they are so different from the rest of the urban pack.

These three outsiders wander the city or stay hidden during their days.

Escaping an existence of family and work like everyone else, they seek something they don’t even know what it is.

Rejecting the standard rules of society, they intend never to change, continuing to live in their way.

We discover a Hong Kong that ordinary people do not know, full of secrets and people as crazy and lonely as they are.

Once we get to the end, strangely enough, we wonder if maybe we are not the crazy ones.

At least it happened to me, looking at their days and comparing them with my daily study and work.

So I have to admit to being a little envious of their freedom from the ordinary and supposedly normal people.

A thousand colors life and death in Hong Kong

Fallen Angels is one of Wong Kar Wai‘s best movies ever, alternating a successful mix of different genres for 1995.

Melancholy and solitude haunt every protagonist as they cross paths in the alienating world of everyday life.

Their absurd but brilliant narrative voice guides us every step of the way and every minute of the story.

Through their thoughts we discover their nature, emphasizing with every word their silent rebellion against the outside world.

I must furthermore mention that another protagonist of the film is unquestionably the city of Hong Kong itself.

A city that is always open and crowded, day and night, carrying on business without a break for anyone.

However, this unforgiving place is also beautiful and full of life in its own way.

However, this unforgiving place is also beautiful and full of life in its own way.

Our protagonists move bewildered along its streets, unable to find their place in a society that ignores their existence.

But perhaps their inability to adapt is their natural strength and what makes them truly free.

By living a life without making long-term plans, indeed, they alone may be able to enjoy the moment truly.

Shots are constantly up close to the characters as if we were all stalkers relentlessly pursuing them night and day.

This does not prevent him from creating scenes of great emotional effect, as well as a few but extraordinary action sequences.

The many clubs and the wet and dirty streets of the city are cold and emotionless, but being safe in their homes is different.

We must note indeed their lonelier moments are always sunk in the light or partially hidden in the shadows.

For such a film it was obviously essential to have a talented cast of actors to give life to the 3 characters in the story.

Leon Lai is an apparently emotionless killer, as cold and ruthless as the city where he lives.

But as we listen to his thoughts, we discover a human side and an amusing sense of humor that you wouldn’t expect.

Equally complex is the sensual Michele Reis as a businesswoman, secretly in love with the killer.

A love she’ll painfully have to give up, except to find (perhaps) another soulmate near the end.

Simply fantastic is the slacker Takeshi Kaneshiro, indifferent to everyone but probably the most sensitive of the three characters.

The moments with his father (Chan Man-lei) are compelling, depicting a small family of two amidst arguments and reconciliations.

Unfortunately, this film was not a great economic success in theaters, with low box office both at home and abroad.

Thanks to the director’s name, however, fans have created a cult status over the years, which I enthusiastically join.

Fallen Angels is mandatory for fans of Eastern cinema, among whom perhaps some did not see it back in 1995.