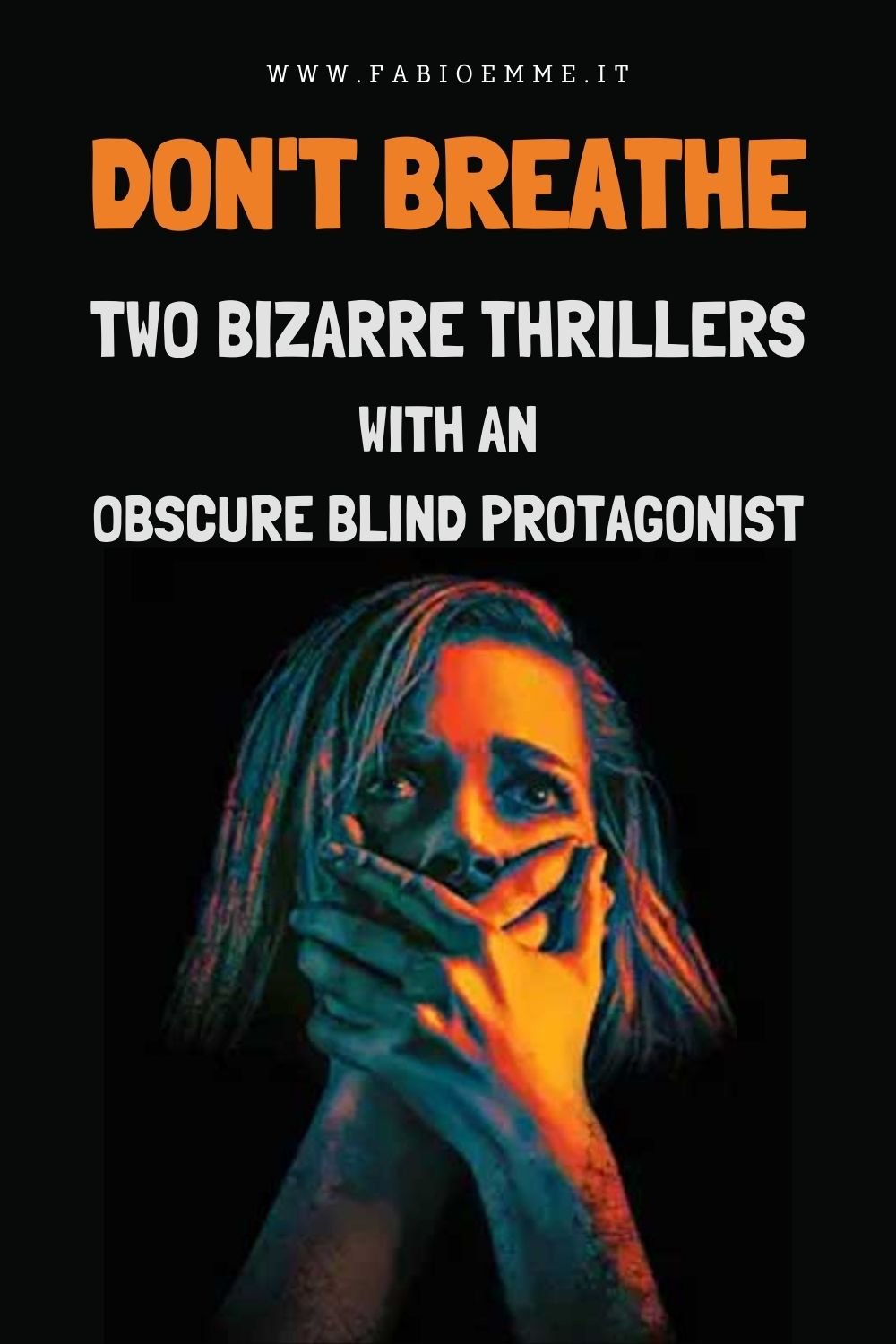 Those Don’t Breathe movies are 2 very unique pieces of a minute saga, sharing only one cast member between them, Stephen Lang.

He’s a very particular character that we struggle to categorize but who we certainly can’t consider to be good.

Especially in the first movie, he is relentless and ruthless in pursuing his agenda, having no mercy for anyone who gets in his way.

The fact that he is blind does not hinder him in his actions, adapting to survive and fight like one of the most lethal soldiers.

Besides this strange, ambiguous, and amoral character, the 2 Don’t breathe movies also cast a pessimistic perspective on our society.

In this world, sadly close to our reality, there are no rules and codes of honor of any kind between friends, lovers, sons, and fathers.

Everyone is capable of doing anything, as we discover scene after scene as these thrillers unfold.

Of course, this is just an advantage for us who watch them all, as we have two stories that always surprise us in some unexpected way.

It’s no coincidence that both earned very well at the box office, especially the first one released before the global COVID pandemic.

It is a remarkable good result for two films with modest budgets, whose earnings have amply repaid the producers.

All of this confirms that what really matters is someone who directs with clear ideas about what they are telling.

We will now take a closer look at these 2 movies and their cast, trying to discover why we shouldn’t breathe while watching them.

The story begins with a trio of friends dreaming of changing cities and their poor dead-end lives.

They have long known this strange old blind man who lives in total isolation, convinced that he is an easy target for a robbery.

Indeed, they discovered that the man had lost his daughter in a dramatic and fatal accident sometime before.

They decide to sneak in at night, believing that he is hiding a lot of money received as compensation somewhere in the house.

It will be a tragic mistake for them because, although blind, the older man is absolutely not helpless.

When he notices the intruders in his house, the soldier inside him emerges in all its lethal and unprecedented ferocity.

Dramatically, the roles suddenly reverse, and he becomes the one to hunt down the three unfortunate boys.

As if that wasn’t enough, they discover a terrible secret by delving into the darkest and most hidden rooms.

At that point, they realize that the man is not only a deadly warrior but that he is also completely insane.

In an escalation of madness and violence, everything degenerates into a battle within those walls with no secrets for the old soldier.

From a haunted house to a robbed one

Since this is a story set entirely inside a house, it doesn’t need too many characters.

Don’t Breathe only has a cast of four actors, along with another hidden that we’ll see towards the end.

The most interesting character, as mentioned, is Stephen Lang, here playing an exceptional villain.

An evil man who is nonetheless driven by human motivations, albeit carried out in the craziest ways.

His handicap does not prevent him from fighting to death, as the other characters will discover.

Jane Levy is the most important of these three thieves, helped by Dylan Minnette and Daniel Zovatto.

These three friends routinely rob homes in their neighborhood, but deep down, they aren’t bad either.

I mean, these young people are driven only by desperation, hoping for a better life in a different place.

All this by putting them in the context of thrillers and adventure. without being stupid or banal.

Director Fede Alvarez had to recover from his previous film, the flop remake of Sam Raimi‘s famous Evil Dead.

Another movie that I liked anyway, though nowhere near as good as the original.

However, in this case, the result is unquestionably cool, creating a tension that never goes down until the end.

The actual crime would be just to have never seen it.

Don’t breathe 2 picks up eight years after the events of the previous film.

Our blind soldier, still alive, still resides in the seclusion of a house in Detroit.

But this time, he is no longer alone, raising a little girl he trains to fight and survive.

The child obeys and follows his teachings but begins to grow impatient with that isolated condition.

A woman, also a war veteran, is the only person they hang out with, and she takes the girl out for walks now and then.

During one of these pleasant outings, they meet a man who looks quite interested in the girl.

That same evening, the man invades the blind man’s place with the help of some accomplices who want to kidnap her.

Then begins another long night of survival and battle inside the house, where, however, they are defeated.

The invaders manage to take the little girl away and set fire to the whole place, but the blind man survives anyway.

Alone and no longer with a reason to live, the Navy Seal nonetheless manages to pick himself up.

He then decides to carry out one last mission by hunting down the kidnappers and saving his beloved child.

A sequel following the original without copying it

Reprising the winning formula, Don’t Breathe 2 succeeds to be original by changing almost the entire cast.

Only Stephen Lang remains from the first film, in a character that this time seems initially positive.

However, as before, we must not be fooled by appearances, as the story will reserve more than a few surprises.

We certainly can’t say that he is a sweet and tender father towards the child, but he undoubtedly loves her.

Little Madelyn Grace is very good in a not easy role, in her way as combative as the older man.

But of course, being very young, she is easier to deceive, figuring out the truth on her own, piece by piece.

Therefore, her figure is the one we are close to, discovering with her the pieces of a story more complex than it seems.

Along with her, the Brendan Sexton III character is what gives the ultimate change from the first film.

Seemingly slimy and ruthless, the man then almost seems to act out of love, except to surprise us again near the end.

Fede Alvarez, this time only produces and writes, while directing is newcomer Rodo Sayagues.

There’s more action than the previous one, without distorting the thriller soul and the moral decadence of the various characters.

Summing up, it’s an excellent sequel that rightly closes the story without leaving unlikely open glimmers for a third sequel.

Let’s take a breath with some conclusions

Choosing between these 2 different Don’t breathe, I’d say I prefer the story and cast of the first film.

Mind you, even the other one is still a great sequel, perfectly entertaining and enjoyable.

That’s not a minor thing since many productions often ruin everything by continuing a saga.

The first film impressed me, especially for the director’s skill in creating more extended scenes of tension.

As mentioned, I had already appreciated his remake of Evil Dead, which had some remarkable and intriguing ideas.

Unfortunately, Sam Raimi‘s old cult comedy horror destroyed it, as it couldn’t hold a candle to it.

However, the idea was good and could have been a great movie without being a remake, with the girl struggling to distinguish her hallucinations.

But everyone was waiting for Ash with his chainsaw and not a drugged-up girl cleaning up in the haunted house.

While remaining in the psychological thriller, the second Don’t Breathe has a decidedly more action turn in many scenes.

But despite this, the soul and the basic idea remain effective in both cases.

Talking about the moral decay of the poor outcasts of society, it’s hard not to see a little piece of the world around us.

And it is precisely these elements that make the two films a small winning saga, concluded with dignity and intelligence.