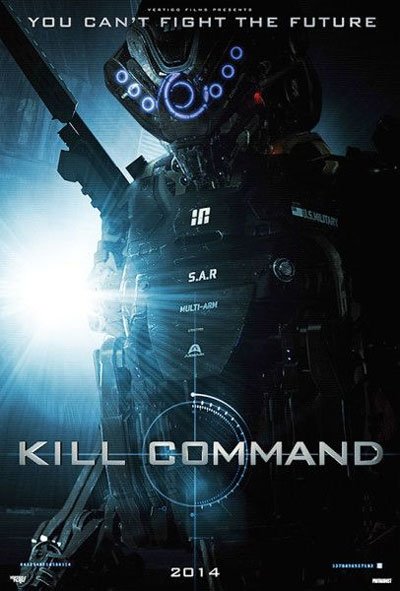 Kill Command is a 2016 sci-fi action film about a group of marines who travel to a desert island for training with robot drones.

A young girl joins them as an engineer evaluating their performance and the machine hardware they face.

The group doesn’t greet her well, as she has surgically functioning technological implants inside the brain.

Also, the soldiers are already exhausted, as they arrive without breaks from other robot training sessions.

Once they arrive at the site, they spot the first drones from afar and eliminate them without much difficulty.

However, the girl, trying to get online with her implants, discovers that communication with the outside world is impossible.

Moreover, one of the guards mysteriously disappears during the night, leaving some sinister traces of blood.

The next day the marines follow the trail back to the clearing where they exercised the afternoon before.

When the robots open fire, killing some soldiers, they quickly figure out how they’ve walked right into a death trap.

At that point, they all realize what really happened on that island during the communications blackout.

The robots continued to improve their efficiency by practicing on human targets, only this time using real ammunition.

Behind this new program is a ruthless artificial intelligence, which intends to escape from that place by any means.

At that point, they all must join in the fight to survive and prevent the killing machines from invading the rest of the world.

It’s essential to train, but sometimes it’s just too much

Wanting to compare, Kill Command is a successful 2016 action sci-fi combination of Predator and Terminator.

Sure, let’s make it clear, it doesn’t manage to reach the level of these two absolute cults in the slightest.

However, we don’t live only on masterpieces, so judging this movie for good and intelligent entertainment is correct.

As mentioned, the plot is an exciting variation of artificial intelligence going crazy in a violent and bloody way.

What’s new, this time, its purpose is not to conquer and enslave all of humanity, quite the opposite.

In its way, this AI wants to improve its training program, forcing the soldiers to become better with its robots.

Unfortunately, its program becomes a ruthless slaughterhouse where those who don’t pass the test die brutally.

In a way, we can say that the fault lies with us humans, who are the first to start this madness.

As we are always looking for new and original ways to exterminate our fellow humans, similar tragedies are inevitable.

We design these killer robots to replace flesh and blood soldiers, already thinking about future wars.

Obviously, humans aren’t psychopathic enough for our armies, so it’s better to create something heartless.

Like our children, therefore, the sins of these robots can only fall on our consciences.

Can you make entertaining sci-fi with not much money?

In his first directorship, Steven Gomez shows remarkable talent, making the most out of a moderate budget.

With just over a million dollars, this production manages to put on a remarkable and exciting show.

The natural locations are an excellent backdrop for the fights, with some fine industrial and technological buildings.

In addition, the director handles well at both crafting the action scenes and outlining the backstories for the few but essential characters.

Above all, the most exciting role goes to Vanessa Kirby, a programmer on a special mission to clean up her company’s mess.

Her computer-brained girl character is seemingly cold and callous, slowly becoming the leader of the group.

The soldiers apparently despise her for that, though they consider her kind the reason why they will lose their jobs soon.

Such behavior begins with the group’s commander, the clever and quick Thure Lindhardt, who is close to retirement anymore.

But even he has to change his mind when the girl becomes their only chance to get out of that cursed place alive.

In fact, with his brain graft, he can talk to the machines and find out their plans in advance, discovering their ultimate purpose.

The only exception in the group is David Ajala, the soldier who willingly accepts her presence, immediately understanding her importance.

In conclusion, to not spoil the plot too much for those who want to see it, I recommend Kill Command as one of the best 2016 sci-fi action.

We may never remember it as a masterpiece, I repeat, but it does its job in a thoroughly decent and respectable way.

The Feast – Last Dinner You...