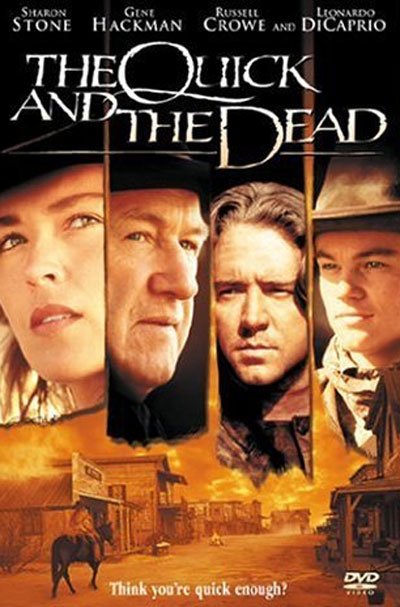 The Quick and the Dead is a movie set in an old western town, where an evil boss and his men rule over everything.

Every year they do a great tournament between the greatest gunslingers of the west, with a rich prize for the winner.

Besides earning a lot of money, the boss uses this great challenge to eliminate his most dangerous rivals.

At the dawn of a new bloody tournament, a mysterious and beautiful girl claims to participate against the other gunslingers.

She aims for revenge upon the man who killed her father, who was once the sheriff of that same town.

However, she’s not the only danger to the boss because other harmful competitors are participating in the tournament.

One of them happens to be his son, who dreams of gaining his respect even if it means challenging and killing him.

Next is a man who retired to become the pastor of a church and was once one of his most loyal and capable henchmen.

Unhappy with his choice of life, the boss kidnaps him in chains and drags him back to town, making him hold his gun again.

One after another, all the contenders will have to face each other in a deadly duel on the city’s main street.

But the big boss of the town likes to play dirty, fearing he will lose his power over the city.

So, cheating and scheming in the shadows, he does whatever it takes to make sure he’s the only winner in the game.

A lovely milkshake of western styles

The Quick and the Dead is one of the funniest action western movies I’ve ever seen.

A fast-paced film that flies by in a flash, full of quotes and references to the old genre.

It is one of the most underrated works of Sam Raimi, an author with a prodigious kinetic and acute sense of humor.

After concluding the fabulous Evil Dead trilogy with Army of Darkness, the director comes to this excellent production.

As already mentioned, Raimi gives his personal touch to numerous classic westerns in the delightful effects of the various sequences.

Each duel is an explosion of western joy with extreme zooms and exaggerated close-ups of the protagonists.

This movie stands out from other westerns in being more confining and entirely shot inside a small town.

Let’s forget about the dreamlike panoramas of the great plains and mountains in John Ford’s and Sergio Leone’s masterpieces.

We are prisoners in that cursed place, along with all the participants of this great game where it is impossible to win.

The relationships between the various characters are phenomenal, building a tasty little ecosystem of hate, resentment, and revenge.

The minor supporting roles are drawn to perfection, adding a believable side dish to competing colorful gunslingers.

One by one, let’s take a closer look at the main protagonists of this great duel.

The Quick and the Dead boasts a large, established cast, with some actors would become famous later with other movies.

The story’s central character is the beautiful Sharon Stone, in the atypical role of a strong but suffering gunfighter.

The actress is also a co-producer, imposing among her demands the wise choice of Sam Raimi to direct the film.

She plays a woman extremely skilled with her gun but unwilling to kill despite her past of hatred and pain.

His enemy number one is the supreme Gene Hackman, who had a similar role in The Unforgiven just a few years earlier.

Taking his character from Clint Eastwood‘s masterpiece to the limit, he becomes a pure being of evil and greed.

However, there is space for a few moments of humanity, especially when he has to face his son Leonardo DiCaprio.

A few years later, the actor would embark on the Titanic, which would definitively establish him as an international star.

Here he already gives us a small example of his talent, playing a blustery but likable gunslinger boy.

All the city women love him, in one way or another, including the silent and tough gunslinger protagonist.

Finally, we have another one who had yet to fully blossom, the actor unknown at the time Russell Crowe.

It would take another five years to lead Gladiator, becoming one of the highest-paid actors in the world.

I hope all these ingredients are enough to make you curious to taste this delicious western recipe.

Personally, I rewatch it every chance I get, enjoying every duel and gunfight in The Quick and the Dead.