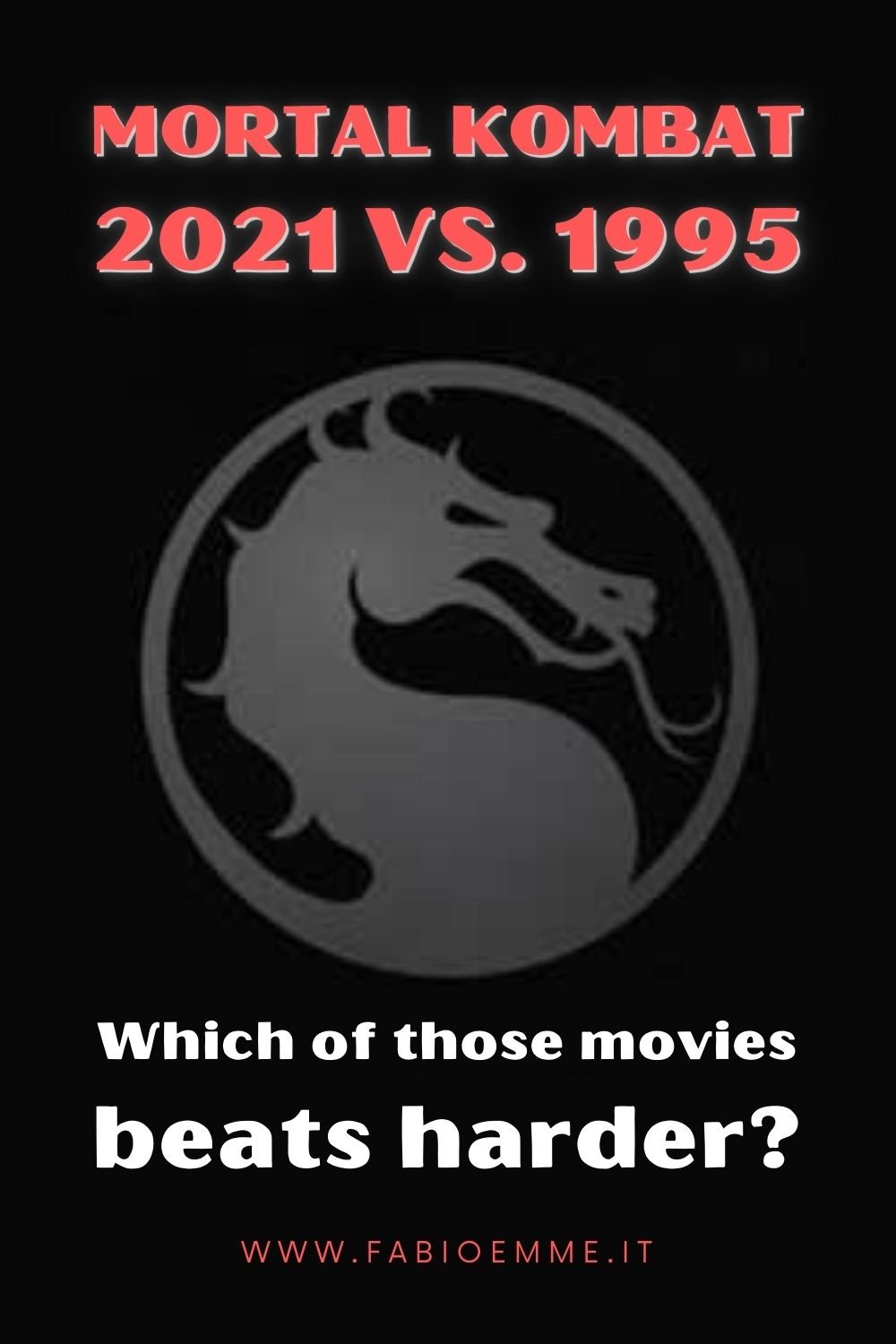 Mortal Kombat is one of the videogame sagas with a long tradition, becoming a movie in 1995 and arriving until today with the last chapter in 2021.

They were the distant 90’s when many other kids like me and I went like every day inside a bar or an arcade.

We enjoyed electronic entertainment primarily that way in those far-off days, though that was about to change.

Just around that period, the first Playstation hit the market, although it was still an expensive and mysterious object for most of us.

Indeed it was not the first-ever home game console since some of us had already tried a Commodore or an Amiga.

However, it was the beginning of mass gaming culture as we know it today, not just for a small group of geeky nerds.

Going back to Mortal Kombat, our teenage hearts missed a beat the moment we saw it on the old gaming cabinets for the first time.

We perversely gleamed at the violence of its famous fatalities, gutting our enemies with gleeful spurts of digital blood.

The game was simple, immediate, and damn fun, with plenty of special moves to learn for the most perfectionists.

But when a few years later Mortal Kombat came out as a movie in theaters in 1995, or even today in 2021 for that matter, were we as happy?

Let’s see them both close to find out if there is anything to save or another failure to translate a game into a movie.

Obviously it was impossible to fit the full roster of all fighters within the movie.

So in both cases, the production had to select which characters were most appealing to support a minimum of plot.

We can start with Lord Raiden, the God of Thunder. A mighty warrior who, good for us, keeps watching to defend the kingdom of Earth.

He’s a fearsome warrior who shoots lightning bolts from every orifice yet always stands too far apart.

However, in 1995’s Mortal Kombat, I liked the friendly and brilliant Christopher Lambert more than the more anonymous and generic Tadanobu Asano of 2021.

To participate in the tremendous intergalactic and dimensional tournament, who can we earthlings count on?

In the old movie, we have the soldier Sonya Blade, the cocky martial actor Johnny Cage and finally, the redemption and revenge-seeking warrior, Liu Kang.

This unlikely comic trio works intermittently, and their motivations are sometimes vague if not entirely incomprehensible.

Besides, let’s face it, in the end, it’s always Liu Kang who handles the most challenging fights.

This is probably because it’s the only one with an actor (Robin Shou) who has some athletic credibility.

In 2021 we have some worse actors, but at least they can actually move during fights without looking too ridiculous.

Blade and Kang are back again, side by side with the poor Jax, who becomes interesting later with his robot arms.

Absolutely incomprehensible is the choice as the protagonist of Cole Young, here with the face of the honest Lewis Tan.

One of the fighters who were not exactly among the most popular and beloved of the saga was much better to choose from.

The evil and monstrous opponents

In the villains’ team, we have the glacial Sub-Zero, really the cruelest bastard in history.

No comparison is possible between this figure from 2021 and his Mortal Kombat counterpart from 1995.

Back then, he was strong and spectacular in combat, but just as silent and without personality.

The character of Scorpion has instead totally changed, becoming one of the good guys.

Hiroyuki Sanada plays him well, albeit briefly, as the protagonist’s ancestor spirit.

In the old movie, he was instead Sub-Zero’s trusty sidekick.

Yet it’ another solid and deadly killer, but also flat and without any narrative background.

Much more interesting. In the new movie is the character of the cruel mercenary Kano.

A funny and straightforward character, undoubtedly not favorable, with the face of the charming actor Josh Lawson.

Before he was the classic brute and violent, he goes from one team to another in a series of funny antagonisms and betrayals.

One of my favorite fighters was Goro, a four-armed demonic prince with enormous physical power and a bad temper.

He deserved a few more minutes (and dialogue) instead of ending up blown off a little too quickly in both movies.

We then close with the great mastermind (sort of) behind the supervillains, the soul-sucking sorcerer Shang Tsung.

Here the comparison is easy, as 1995’s old Cary-Hiroyuki Tagawa had much more face and charisma as a protagonist.

The character ends up outclassed by Sub-Zero in the new movie, as mentioned above.

How do our heroes beat the crap out of each other in these two movies?

Here we finally get to a comparison where some fascinating differences emerge.

The Mortal Kombat of 2021 is ahead thanks to (I repeat) a better choreography cast and more advanced digital special effects.

Yet due to this CGI gap, non-existent in 1995, the old Mortal Kombat had better care for sets and costumes.

At that time, they wanted to make a movie targeting young audiences and families, with all the inherent censorship limitations.

The result was, unfortunately, we didn’t see a single drop of the gallons of blood spilled in the video game.

Conversely, in the new movie, we have some tasty splatter moments.

These moments are always dispensed with irony, never in horror or scary way.

In addition, in 2021, we have a significant amount of fighting; indeed, we could say almost non-stop from beginning to end.

The old movie is still closer to the 90’s action slower rhythms, even if paradoxically, this amplifies the flaws.

Despite everything, I still prefer this style, far from the frenetic editing and seizure-like pace of too many modern movies.

However, referring specifically to Mortal Kombat, I admit without hesitation that I had much more fun with the fights of 2021.

It is useless talking about substance in a game where it only matters to bash your opponent to death.

Nevertheless, in both movies, some characters manage to be interesting, especially in Mortal Kombat 2021.

Sub-Zero and Kano create a modicum of interest in what they say and do.

Sure, you don’t expect Woody Allen-esque dialogue, but at least it’s better than the rest of the characters.

Overall, the movie remains as confusing in 2021 as in 1995, but at least then we saw this Mortal Kombat tournament.

The new movie hangs in the balance with no real ending or extensive explanations.

Simply, the villain stays alive, and we have the promise of seeing Johnny Cage in an eventual sequel.

A bit of a difficult choice, considering that even then, it was certainly not the best production of that period.

Paul W.S. Anderson has always been a decent director, but still with an interesting filmography.

For example, he made the first Resident Evil movie, one of the few cases of video games that also work as movies.

Simon McQuoid instead is at his debut, showing a good talent for action but too much storytelling poorness.

The two productions are very different, focusing on a movie with elaborate sets and colorful and flashy costumes in 1995.

The environments in 2021 are generally poorer and more spartan, while the story constantly moves around sets with continuous fighting.

So in this aspect, the Mortal Kombat of 1995 wins, having more care and attention to detail about what it tells.

And now we come to the long-awaited moment, where we try to determine which of the two contenders is the winner.

Let’s start by saying that they are two modest movies, at best, maybe just a little more for the video game fans.

The story of the nine Mortal Kombat tournaments to save planet Earth is, to say the least, demented.

I mean, it works great in the game because we cared little or nothing in the end, but the movies do not work like that.

This is what most producers insist on not wanting to understand, making a series of failures before they arrive in theaters.

We could talk about the various Assassin’s Creed, Tomb Raider, Max Payne, and many others, quickly forgotten one after another.

Video game logic and film logic are different, though they have always intersected and influenced each other.

In this case, my judgment favors Mortal Kombat 2021, but only because the 1995 movie was much worse.

Thankfully, the new movie flows away with more enthusiastic fights without dwelling too much on the plot and characters.

We’ll see in time if earned enough to deserve a sequel, in which I’d always place very modest expectations anyway.

In conclusion, these Mortal Kombat movies are two cinematic defeats, among which the most recent is only the least bad.