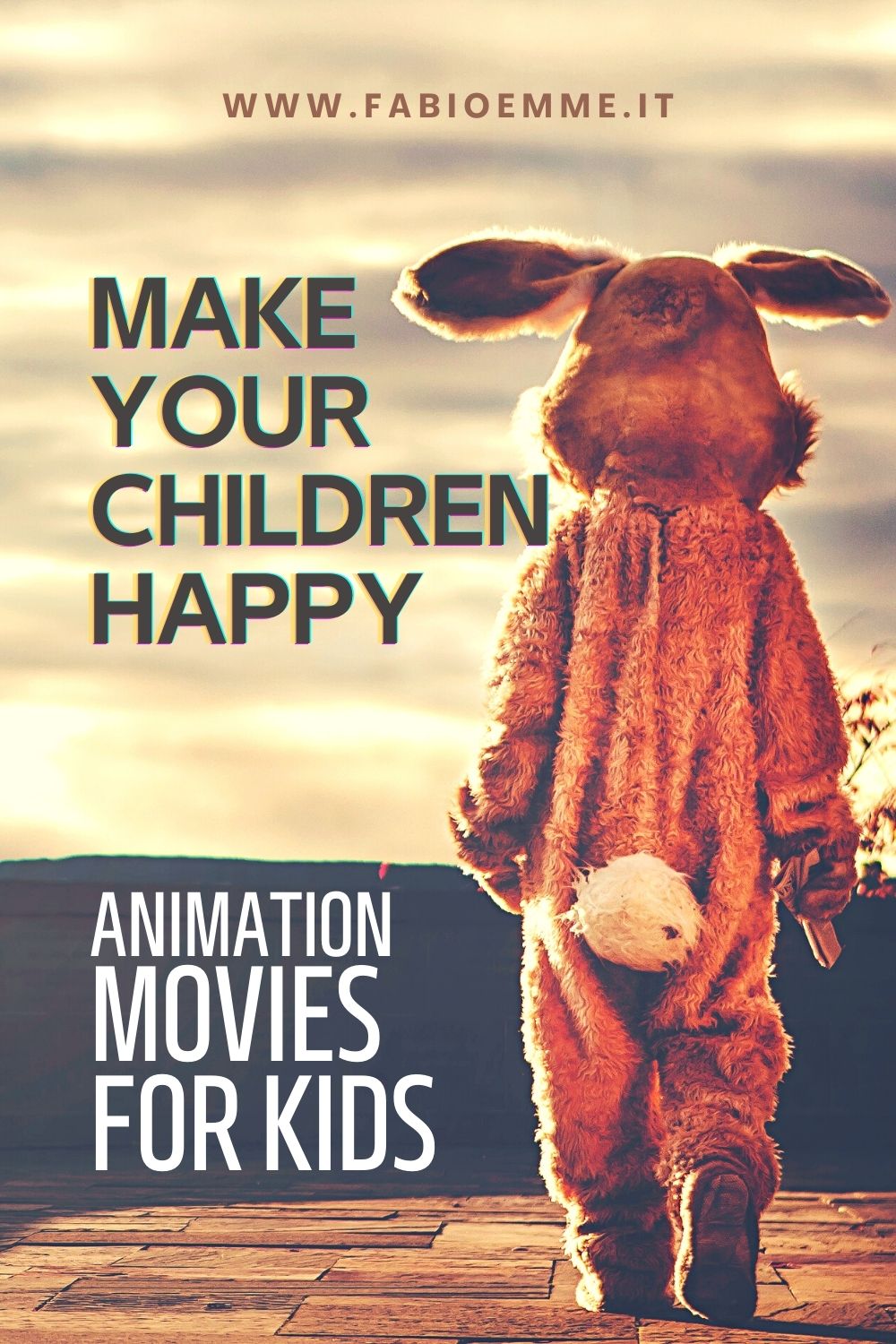 Everyone likes to make kids happy, and the easiest way to do that is to have them watch children’s animation movies.

These stories are the contemporary equivalent of those bedtime stories our grandparents told back in times past.

Then again, let’s tell the truth without shame; after all, we like them too.

At least speaking for those of my generation, born in the late ’70s.

In the end, however, we all love these simple stories that rely on the purest and most basic feelings.

We can think of 1994 The Lion King, where the central theme is the loss of parents and the transition to adulthood.

Or movies like The Little Mermaid or Beauty and the Beast, talking about love between outsiders and diverse people.

In all these cases, the message is so simple and effective that it reaches everyone, making both children and adults happy.

So let’s all lie comfortably on the couch, getting ready to watch some of these beautiful movies for kids.

Because whatever the day ends, the most important thing is to love each other as we can while we are all together.

A young boy moves to his grandparents in Tokyo after his mother’s death and the father’s abandonment.

Angry about the new predicament that he doesn’t understand or accept, he runs away to be alone and get some peace.

Unwilling to go back, he hides until he sees a strange and imposing figure roaming the dark alleys and decides to follow her.

Without even realizing it, the boy enters a magical passage, a secret border between two worlds.

Suddenly he finds to live in the beasts’ world, an invisible reality that always existed next to the humans’ one.

Knowing no one, he moves into the house of the man he had followed to that alley.

However, that man was not a man at all, but a bear creature is competing with another beast warrior to succeed that Grand Master.

The creature has transcendent strength and is very skilled in combat but is just as stubbornly ill-tempered with an insufferable demeanor.

Initially unable to stand each other, both will eventually find what they were looking for from each other.

The child will find a new father, just as the beast will find a son and a disciple to teach and help him improve his warrior skills.

However, there will be a tremendous challenge for them when a new, implacable enemy threatens the peace of both the human and beast worlds.

Not the family you’re born into, but the one you find

The Boy and the Beast is an exciting and spectacular animation movie, where the kids are the real stars.

Most of the events, whether sad or happy, begin and end with the intervention of the children, more likely to act promptly.

Indeed, the adults are often too arrogant or stupid to comprehend, whether beasts or men.

However, despite the suffering these youngsters must face, their youth often has a strength their elders no longer have.

Initially, it seems like the two older masters must fight each other for power, but soon everything changes.

It’s no coincidence that in that world of magical beasts, we humans are the most dangerous creatures in the end.

The danger comes from our inability ‘to manage the most primal emotions, such as anger, fear, and desire for revenge.

Despite the dramatic moments of the kids in this story, the atmosphere is happy and lively in a colorful and imaginative world.

There is also room for love in both the world of beasts and men and reconciliation and forgiveness.

In short, the tale begins as a coming-of-age story and becomes a fantasy where the hero fights an enemy that, after all, is not evil.

In short, a perfect synthesis of the brilliant and stupid human nature through the eyes of a people of cute magical beasts.

Once upon a time, there were storks that flew for miles to deliver babies to expectant families.

It may sound like a fairy tale, but don’t believe these friendly animals were stupid or disorganized for a moment.

In fact, at the top of a distant mountain, they have a headquarters so efficient it would make Amazon envious.

Until, one day, a stork deviates from the trip, refusing to deliver a baby girl and deciding instead to keep her.

Since then, they have given up dealing with newborns, diversifying their business into an international delivery business.

However, one day a new baby is unexpectedly born in the factory.

Involuntarily, the company’s best employee and an overenthusiastic young intern are to blame.

When they find out the stork’s chief dictator would like to dispose of him, they protect him and leave to deliver him to his parents.

As his family reconnects during the wait, their journey will be much longer and more complicated than they first thought.

Because their boss doesn’t like to change his money-making factory’s policy, he sends his hounds on a hunt to retrieve the baby.

Coming after them are also some wolves in love with the newborn and would like to raise him in their pack.

The employee and the intern won’t have a moment to breathe until the baby arrives at the door of his new home.

Storks is a funny parody about the business world inside a hilarious animation movie for kids.

Turning the happy tale we all know about children’s origin into a multi-million dollar company was a brilliant idea.

Plus, the characters are all irresistible, from the main ones to simple extras who only appear for a few minutes.

Mind you; there’s nothing here that hasn’t been seen before in other slapstick comedies.

But the crisp atmosphere and clever world-building make it all new and intriguing.

All of the gags are interesting, including some totally over the top but, just for that, damn funny.

For example, we can take the hilarious moment of the employee’s promotion.

Uncontainable joy exploding in his mind c the equivalent of a nuclear explosion.

This moment repeats itself when his obnoxious colleague is promoted, along with an over-the-top dance that upsets his serious demeanor.

Maybe it’s a bit corny for the cheerful family where the children try to be happy while the parents do too much work.

A little too quickly, they make up and unite to decorate the house waiting for the baby’s arrival.

As mentioned before, however, we’re talking about a movie teasing the career’s obsession, so it fits the narrative.

In summary, it is a simple animation movie perfect for making the whole family happy, from kids to adults.

Finally, we come to the latest successful production from Disney, as usual, always prolific on the stage of animation movies for kids.

The story takes place in a world where humanity split into several clans of warriors after miraculously avoiding the apocalypse.

These clans still cannot live peacefully, as the danger of a demon that turns humans to stone is still present.

But demon power defeated them, too, turning them into immovable statues over the centuries.

However, the last dragon infuses the power of his siblings into a magical gem to protect humans.

Desiring peace, the city king guarding this gem invites all other clans to an extraordinary summit.

But the other leaders’ desire for power is too strong, and a battle ensues to possess the dragons’ portentous artifact.

The demon takes his chance and attacks the city, while the men shatter the magical gem and flee with the pieces.

His attack devastates the city while turning the king to stone, except he successfully lets his only daughter escape.

This little girl will grow up trying to unite the gem’s fragments and the last human cities under one flag.

The most Eastern of the major Western productions

Raya and the Last Dragon is the latest in the long Disney list, towards which I’ve always had conflicting feelings.

This production company undoubtedly makes many cult movies such as Inside Out, The Incredibles, or Wall-E.

However, although their animations movies made happy children and families worldwide, sometimes I found them bland.

Maybe it’s just me, but blockbusters like Frozen or the recent The Lion King remake fail to appeal to me.

However, the recipe works, and the ingredients mix in the right proportions without overdoing the drama, action, or comedy.

Moreover, the story’s aesthetic and spirit and the actors in the montage are almost entirely Eastern.

The world of this story has the great charm of these ancient cultures thousands of years old.

But at the same time, computer graphics turn their legends into a fun modern entertainment show.

Like mentioned, the pace of the story alternates seamlessly between many action scenes and fights.

Equally so, the funny banter between characters goes through more dramatic personal choices and experiences.

The various plot twists are far from as obvious it may seem, finally leaving the uncertainty of what will happen.

In this remarkable and long battle, the evil demon is not the most dangerous enemy this time.

As always, above the good of all comes the greedy and stupid thirst for power of human beings.

In conclusion, this movie could finally get the whole family in the cinema together, without leaving anyone unsatisfied.

Warning – Loneliness tales from the...