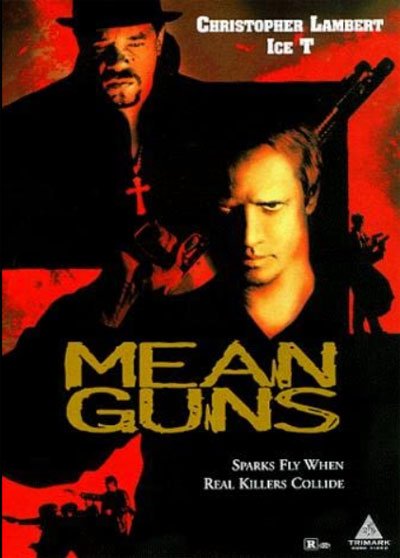 Mean Guns is a 1997 crime action film in which a group of criminals comes together to participate in a mortal game.

At first, they are completely unaware of it, believing they will gather the biggest gang in town.

So they go to a remote, empty prison whose construction is complete under the supervision of the underworld.

Once inside, doors close behind them and they discover snipers on the rooftops ready to take down anyone who escapes.

At that point, the boss informs them that he has discovered personal betrayals committed over the years.

The crime syndicate obviously could not tolerate this outrage, so they decided to kill them all.

However, the leader managed to intervene in the decision, convincing the others not to kill them immediately.

For fun and cruelty, he plans turning their deaths into a mortal game in which only three people would survive.

They will have time until the following day when the official opening of the new prison will take place.

Before then, they can fight and ally as they see fit, as long as there are only three survivors in the end.

Plus, somewhere inside the building is a briefcase with as much as $10 million in it.

Once his short speech is over, the boss’s men spill all sorts of weapons on them, starting the competition.

Therefore, the criminals will have to mercilessly slaughter each other at their leisure before dawn.

The prison then becomes a war zone, not only to survive but also to win the rich prize money.

In the end, there can be only one

Comparing Mean Guns and Highlander‘s immortals, battle royale is automatic, with Christopher Lambert among the protagonists.

In fact, we even have a few scenes in the film where the actor kills numerous opponents with a baseball bat.

So we immediately remember his old movie, since he twirls the weapon exactly as the old samurai sword.

The story’s basic idea is very effective, cleverly explaining this criminal world and the few challenging rules in only 20 minutes.

The introduction of the various characters is hilarious, triggering a pulp attitude that allows us not to take them too seriously.

Once the battle has begun, the criminal horde breaks down into several groups, depending on personal affinities and rivalries.

However, each of them has a personal background, however brief, that has its own credible logic.

All these little subplots give deeper meaning to the main one, making us cheer for one or the other.

Each scene closely follows one of these groups, successfully alternating the pace of action from drama to comedy.

As they fight, chase, and flee relentlessly, they often change their minds creating unlikely and momentary alliances.

These choices ironically lead to fighting side by side with those who were enemies only a short time before.

Moreover, while they all fight, each of them also greedily and relentlessly searches for the great treasure.

As is always the case in this type of film, the mortal pitfall of this game, even more than the criminals, is money.

Finally, it will divide the survivors where Mean Guns parodies the ending of The Good, the Bad, and the Ugly.

A huge variety of nasty and vicious fighters

Albert Pyun is a director whose name I’m sure few of you will remember, always dealing with smaller, low-budget movies.

His long filmography is a series of b-series productions, never over-hyped or successful towards the public.

Among all his works, without a doubt, I don’t think we can classify any of them as a masterpiece.

In my opinion, however, none of these movies were failures, all of them succeeded to entertain with honest quality.

For example, I’d like to remember Adrenalin, excellent science fiction with little money but lots of ideas.

Out of curiosity, it preceded Mean Guns by a year, having been released in 1996.

This movie once again starred Christopher Lambert, that time though in the role of the good hero.

By contrast, he plays an entirely psychopathic platinum blond killer this time, as crazy as he is skilled with weapons.

However, he has humanity and a code of honor, along with a little girl he intends to protect at any cost.

His biggest opponent in this mortal game is another killer, wiser, calm, and older, played by Michael Halsey.

The man initially aims his weapon at him, but then he must make an uneasy alliance to survive in the extreme circumstances.

Finally, we also have the great Ice-T as the all-powerful boss who sets up this massacre just for fun.

His opening monologue is worth the movie alone, only to later discover he’s not as loyal to the crime syndicate as he seems.

Finally, Mean Guns is a movie that no one will ever nominate for an Oscar, but I always remember it fondly.

Indeed, as I often say, if you’re looking for something different, original, and funny, then an honest b-movie is usually the better choice.