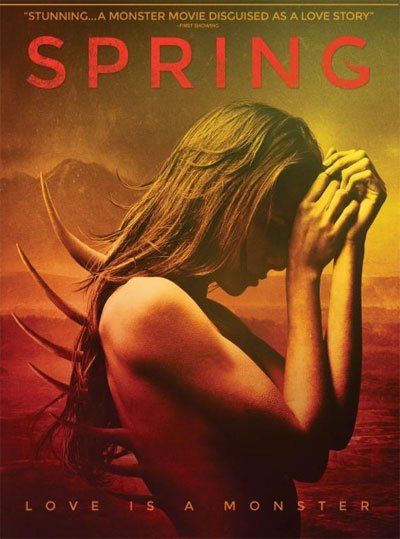 Spring is a 2014 horror/romantic movie that intriguingly mixes love and monsters into the background of my lovely Italy.

A young American goes on a trip to Europe, needing to disconnect from everything he knows.

After witnessing his mother’s death, the boy has no ties to hold him back, so he quits his job as a cook.

Spending some time with a group of friends who met along the way, he finally settles into a tiny Southern Italian town.

To earn some money, he starts working for a small local farmer, assisting him in maintaining his small patch of land.

Until one evening, he meets a beautiful girl in a pub with an immediate deep attraction.

They quickly start a relationship, regularly hanging out in their free time.

The relationship is pleasant and sincere, passing the days together in that small town’s many secret and fascinating places.

However, the young woman has some strange behavior, carrying on in ways that he cannot understand.

Indeed, she occasionally walks away from him for no apparent reason in sudden and unexpected mood swings.

The American becomes suspicious when she tells him she wants to leave him, he shows up uninvited to her house.

At that point, he discovers the horrible secret she was desperately trying to keep hidden.

The girl has a unique disease that allows her to live for over 2000 years, through countless lifetimes.

For this reason, she absolutely must find a mate, and then change the DNA to remain a young 20-year-old forever.

In that very last spring, she is about to change again through a long and dangerous series of beastly mutations.

The boys will then have to decide what to do with their love, giving up immortality and even risking their lives.

Beauty and the Beast with inverted sexes

Spring is a little movie I discovered on Amazon Prime long after 2014 and started watching without much expectation.

Well, I have to admit that I judged it too superficially as if it was the usual story of love a little strange.

The horror atmosphere surrounding the whole story is highly effective and manages to last until the last second.

It is a story that closely resembles Beauty and the Beast, only this time it’s the woman who is the monstrous being.

The girl is not dangerous out of malice but just trying to survive by adapting to her unusual nature.

Her illness causes sudden changes that make her cross the many ancestors of our evolutionary chain.

The only cure is to find a man who will impregnate her and then use the fetus’s cells to heal her condition momentarily.

However, her DNA and appearance change once the cells are absorbed, becoming half a new person.

She has always welcomed this change, having the opportunity to stay forever young and beautiful.

But this time, she no longer feels lonely after all these centuries, she is afraid to change and become another person.

Her new DNA might radically alter feelings toward this boy she loves and doesn’t want to hurt.

In the end, however, it won’t be her who decides, but her body that will make the final choice that could cost her lover his life.

Two young directors with a lot of soul and ideas

Justin Benson and Aaron Moorhead are a couple of young independent filmmakers who are very original and exciting.

I’ve only recently started following them, but I’ve enjoyed their few but intriguing movies like Resolution and The Endless.

Their sci-fi is simple and effective, including good horror moments and a psychological approach to the characters, never trivial.

Spring is basically a love story, made more interesting by including an unpredictable and beautiful monster.

Therefore, the choice of the two main actors was crucial since most of the story works thanks to their performance.

Lou Taylor Pucci plays the young American who travels to Europe to find himself, discovering love through horror.

This character reminds me of the Tourist from the famous An American Werewolf in London, even though it was more comic.

Even better is the female lead, the sweet and lovely Nadia Hilker, really a massive part of this movie’s soul.

At first glance, she seems like the classic dream girl that any of us could fall in love with.

But discovering her past, especially in the second part of the story, she becomes even more ambiguous and mysterious.

To sum up, Spring is a movie I missed in 2014, but I’m delighted to have caught up with it later.

If you have the chance, you can watch it with your soulmate, which will surely be good for your relationship.

Otherwise, if you’re lonely, it’s a great chance to dream of great love while enjoying an entertaining monster movie.